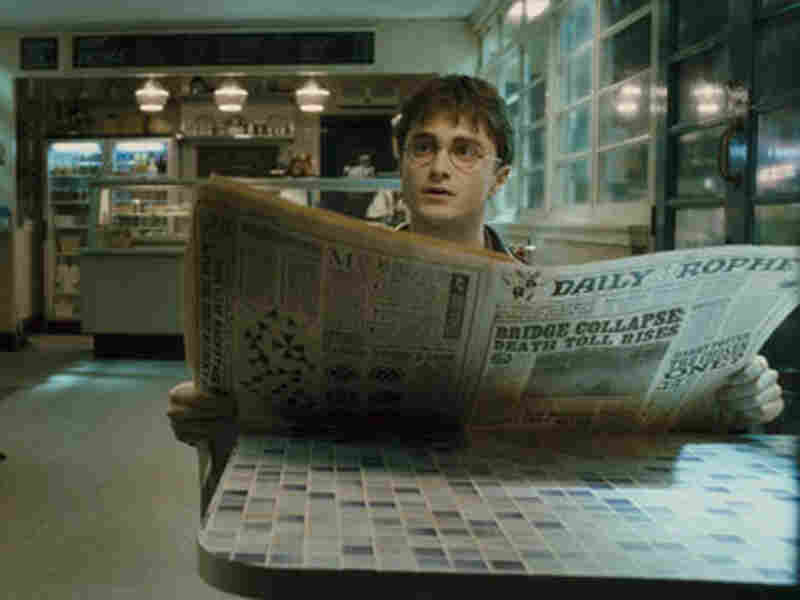 Even Harry Potter's newspaper, the Daily Prophet, is defenseless when a president summons the press to the White House with an "accio" spell. Warner Bros. hide caption 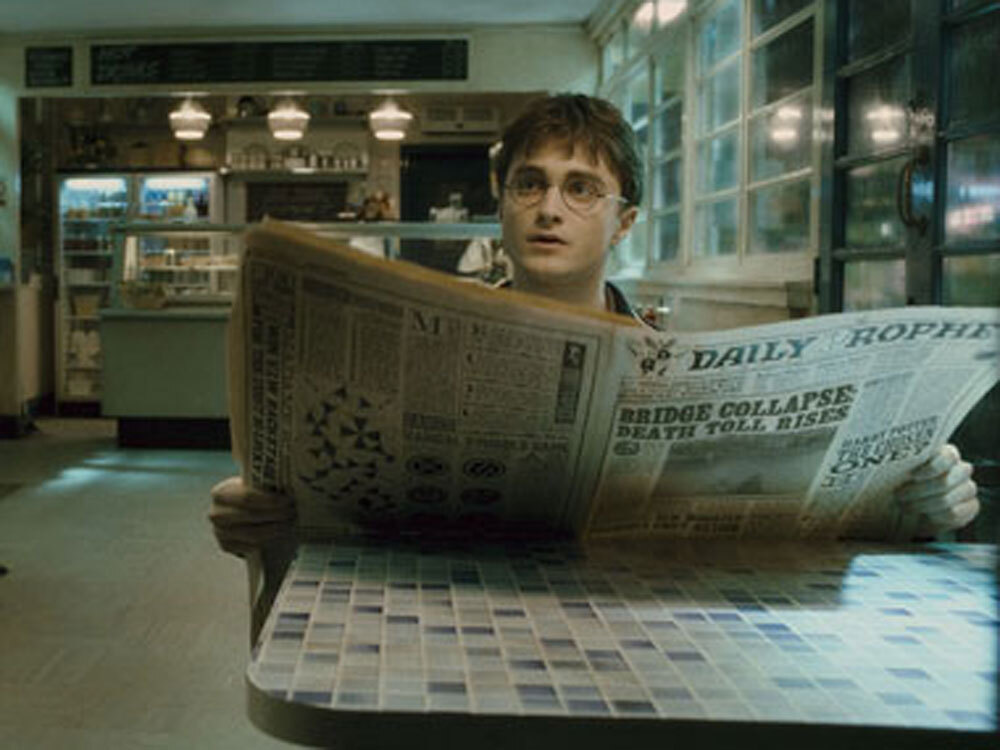 Even Harry Potter's newspaper, the Daily Prophet, is defenseless when a president summons the press to the White House with an "accio" spell.

Welcome to a world of loyalty and betrayal — a magical place where cryptic incantations and mysterious forces can bewilder the most inquisitive muggles.

Hogwarts School of Witchcraft and Wizardry? No, it's the ongoing negotiations over the debt ceiling in Washington.

The millions of Galleons and Knuts the final installment of the Harry Potter film series brings in this weekend would do little to help avoid the looming legal limit on the federal government's ability to borrow money. But some of the most frequently cast spells conjured by author J.K. Rowling could come in handy as the negotiations between White House and congressional leaders intensify.

If you have not read the Potter books or seen the movies, or perhaps if you just skipped "charms" class that day, here are a few useful spells for those struggling with spending cuts and revenue options (supplemented with definitions from the Mugglenet, Harry Potter Wiki and Beyond Hogwarts fan sites). Wands up!

Accio: The "Summoning Charm," used to call an object to hand. President Obama already seems to have used this one to great effect, both to bring congressional leaders to the White House for more talks or to gather scribes from the Daily Prophet and other news organizations for two official press conferences this week. Either way, the president has used the unwritten powers of his office to try to control the talks and cast the press coverage to his advantage.

Avada Kedavra: Also known as the "Killing Curse." Mugglenet notes this is an "Aramaic phrase that means 'I will destroy as I speak.'" Others have more to say on the spell's literary and linguistic origin. In political terms, there are two meaningful translations: "tax increase" and "entitlement cuts." Many in the halls of Congress fear that either meaning would lead to instant death when their core constituents next go to the polls. (Also see "Crucio," another "Unforgivable Curse" used to "torture your opponent mercilessly.")

Confundus: A spell that the Harry Potter Wiki says "confounds your target, or makes them temporarily confused." In Washington, the targets mostly seem to be the press and the public. One way to counteract this charm is to sprinkle some analysis and in-depth reporting. With help from PolitiFact.com, a news site NPR partnered with to fact-check campaign messages during last year's elections, you sometimes can see through the spell — when, for instance, President Obama says Social Security checks may not go out if the debt ceiling isn't increased by Aug. 3, or when House Speaker John Boehner talks about the millions of jobs created by Bush-era tax cuts. Works like a charm! In fact PolitiFact reporters also noticed Confundus spells cast by House Minority Leader Nancy Pelosi and Republican Sen. Jim DeMint of South Carolina, among others. (Also see "Stupefy," a spell that, as its name suggests, "stupefies an opponent, or knocks them insensible temporarily.")

Engorgio: A spell the Harry Potter Wiki says "makes an item larger, as in swollen." The budget wizards on both ends of Pennsylvania Avenue regularly use this charm to inflate spending cuts and savings. You might remember this one from April, when Congress and the president reached their Fiscal 2011 budget deal. All parties emphasized that the final agreement included $38 billion in savings. But the Congressional Budget Office used its own accounting magic to find that actual outlays would be reduced by far less — perhaps $20 billion to $25 billion, as White House correspondent Scott Horsley explained at the time on All Things Considered.

Lumos: The spell "used to make a wand emit light," as Mugglenet defines it. A couple of useful sources of light have already been mentioned here — PolitiFact and the Congressional Budget Office. Another resource is the Concord Coalition, a non-partisan group that often provides clear explanations on complicated budgetary issues, including this recent explainer: "Understanding the Federal Debt Limit." And NPR's Marilyn Geewax posted a "User's Guide To The Budget Battles" on our site this week. It serves as a sort of Marauder's Map for people trying to find their way around the debate.

Reducio: Or the "Shrinking Charm," as Mugglenet calls it. This is the spell that seems most relevant in the current debt talks. But it also might be the one that's least likely to be used. Reducing the nation's accumulated debt is not actually on the table, because the debt can't shrink until the budget is balanced and annual deficits turn into annual surpluses. And that would be some trick.

The Potter novels offer at least one more lesson for fiscal muggles: Gamp's Law of Elemental Transfiguration. Transfiguration is the transformation of one object into another. But in Harry Potter and the Deathly Hallows, the last book of the series, we learn that there are exceptions to this tenet of wizarding that limit which objects can be transformed. As studious Hermione tries to explain to Ron, "Your mother can't produce food out of thin air. No one can."

The rest of the Potter series suggests that money is another object that cannot be conjured. As the Potter fan wikki puts it:

"Money in itself is one of the five exceptions to Gamp's Law of Elemental Transfiguration, meaning it cannot be created from nothing."

Perhaps weeks of negotiations over the debt ceiling prove that "compromise" is just as elusive, with or without magic.