Accessibility links
Obama Cites Lincoln As Model Of Principled Politician Who Compromised : It's All Politics A memorable moment from President Obama's Friday town hall meeting at the University of Maryland, especially for Abraham Lincoln fans, was when the president cited the 16th president to make the point that it's possible to be a person of principle who makes compromises.

Obama Cites Lincoln As Model Of Principled Politician Who Compromised

Obama Cites Lincoln As Model Of Principled Politician Who Compromised 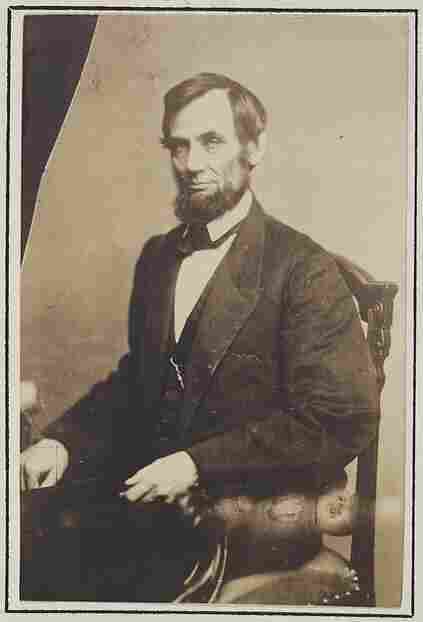 toggle caption
Courtesy of the Library of Congress

A memorable moment from President Obama's Friday town hall meeting at the University of Maryland, especially for Abraham Lincoln fans, was when the president cited the 16th president to make the point that it's possible to be a person of principle who makes compromises.

Obama's discussion of Lincoln was in response to a question from Mary Wagner, a teacher of government at Blake High School in the Montgomery County, Md., suburb of Washington, D.C.

Wagner said she taught her students that the U.S. system of government with its two-party system functions because of compromises struck between the partisan players.

But she wondered, given what's happening in Washington, if she should still be teaching that.

It's worth quoting their entire exchange because it provided plenty to chew on during a sweltering summer day.

It was one more reminder that Americans couldn't have a better model for what's required of them and their leaders in a democracy than Lincoln.

WAGNER: And one of the things that we teach our students when we're teaching them about this governmental system that we have is how important it is in a two-party system to compromise. And my students watched the Republican leadership after the last election saying things out loud like, we're not going to compromise with the Democrats. And does that mean — are things changing? Do we not use compromise anymore? And what should I teach my students about how our government works if people are saying out loud, we're not going to compromise with the other party? (Applause.)

THE PRESIDENT: I think you should keep on teaching your students to compromise, because that's not just how government works; that's how life works. How many people here are married? (Laughter.) For those of you who are not but intend to get married, let me just tell you — (laughter) — you better get used to compromise.

And there's this notion — I was actually reading an article on the way over here, and the basic notion was that, well, Obama is responsible, but he doesn't fight enough for how he believes, and the Republicans are irresponsible but all full of conviction. So this was sort of the way the article was posed. And this notion that somehow if you're responsible and you compromise, that somehow you're giving up your convictions — that's absolutely not true. (Applause.)

I think it's fair to say that Abraham Lincoln had convictions. But he constantly was making concessions and compromises. I've got the Emancipation Proclamation hanging up in the Oval Office, and if you read that document — for those of you who have not read it — it doesn't emancipate everybody. It actually declares the slaves who are in areas that have rebelled against the Union are free but it carves out various provinces, various parts of various states, that are still in the Union, you can keep your slaves.

Now, think about that. That's — "the Great Emancipator" was making a compromise in the Emancipation Proclamation because he thought it was necessary in terms of advancing the goals of preserving the Union and winning the war. And then, ultimately, after the war was completed, you then had the 13th and 14th and 15th amendments.

But you're absolutely right that the culture is now pushing against compromise, and here are a couple of reasons. I mean, one reason is the nature of congressional districts. They've gotten drawn in such a way where some of these districts are so solidly Republican or so solidly Democrat, that a lot of Republicans in the House of Representatives, they're not worried about losing to a Democrat, they're worried about somebody on the right running against them because they compromise. So even if their instinct is to compromise, their instinct of self-preservation is stronger, and they say to themselves, I don't want a primary challenge. So that leads them to dig in.

You've got a media that has become much more splintered. So those of you who are of a Democratic persuasion are only reading The New York Times and watching MSNBC — (laughter) — and if you are on the right, then you're only reading the Wall Street Journal editorial page and watching FOX News. (Laughter.) And if that's where you get your information, just from one side, if you never even have to hear another argument, then over time you start getting more dug in into your positions.

They've actually done studies — this is interesting — that if you put people in a room who agree with each other basically — if you just put a group of very liberal folks together and they're only talking to each other for long periods of time, then they start becoming — they kind of gin each other up and they become more and more and more liberal. And the same thing happens on the conservative side; they become more and more and more conservative. And pretty soon you've got what you have now, which is everybody is demonizing the other side; everybody considers the other side completely extremist, completely unscrupulous, completely untrustworthy. Well, in that kind of atmosphere it's pretty hard to compromise.

So we have to wind back from that kind of political culture. But the only way we do it is if the American people insist on a different approach and say to their elected officials, we expect you to act reasonably, and we don't expect you to get your way a hundred percent of the time, and we expect you to have strong convictions, but we also expect you to manage the business of the people. And if you're sending that message, eventually Congress will get it. But it may take some time. You've got to stay on them.