Accessibility links
Now History, Debt-Ceiling Fight Left Much Wreckage In Its Wake : It's All Politics With the debt-ceiling legislation signed into law Tuesday afternoon, the nation no longer needs to worry about defaultmageddon, at least not until early 2013. That's when the U.S. Treasury once again runs out of room to borrow again. Even though there wasn't a default this time, the partisan fight did plenty of damage. Among the casualties: Obama and lawmakers' images.

Now History, Debt-Ceiling Fight Left Much Wreckage In Its Wake

Now History, Debt-Ceiling Fight Left Much Wreckage In Its Wake 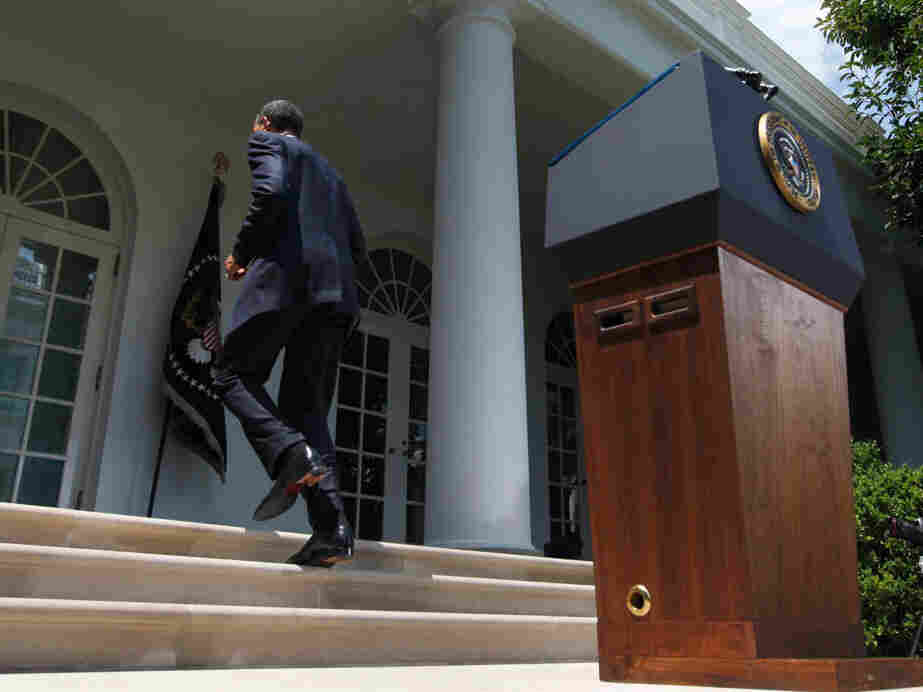 President Obama walks back to the Oval Office after speaking about the Senate's passage of debt-ceiling legislation, at the White House on Tuesday. Carolyn Kaster/AP hide caption 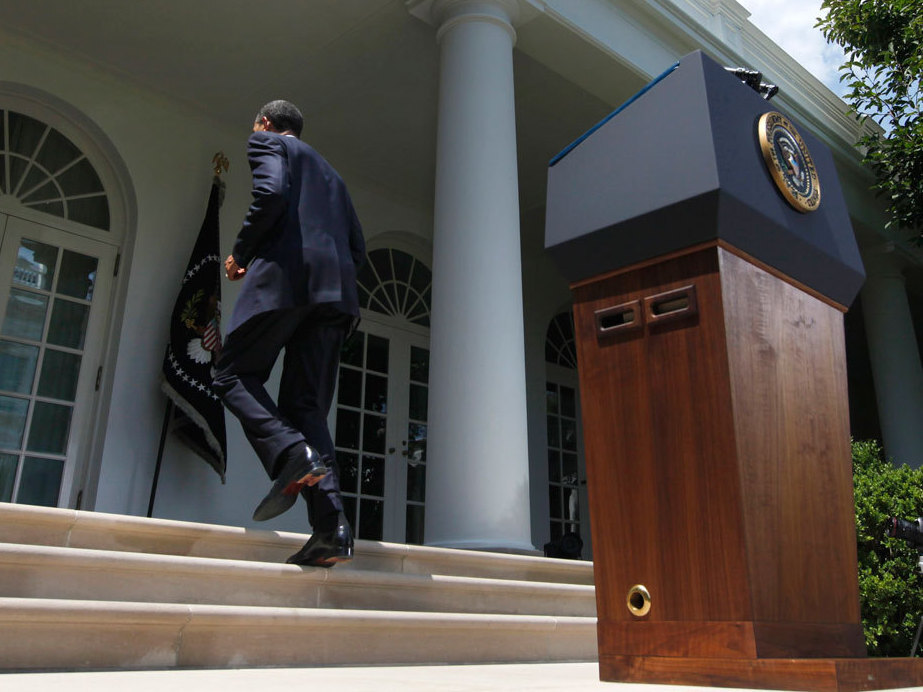 President Obama walks back to the Oval Office after speaking about the Senate's passage of debt-ceiling legislation, at the White House on Tuesday.

With the Senate's passage of the debt-ceiling legislation and President Obama having signed it Tuesday afternoon, the nation no longer needs to worry about defaultmageddon, at least not until early 2013 when the U.S. Treasury once again runs out of the room to borrow again.

But even though there wasn't a default, the fight left plenty of wreckage laying about.

Among the casualties was Obama. Yes, he seemed to have narrowly averted becoming the first president to have the nation default during his term.

But he heads into his re-election arguably weakened. The consensus that the president was forced to move further to his political right — to accept spending cuts without tax increases — has only left many in his already disenchanted political base even more so.

The perception, fair or not, is not only that he moved too far away from his party's center of gravity but that he was a weak negotiator to boot.

It wasn't only liberals who were saying that. Bruce Bartlett, who held a political post as a top Treasury official in President George H.W. Bush's administration, said as much. But many progressives definitely share that view.

While it still doesn't appear that the president will face a primary challenge of the sort launched by Sen. Ted Kennedy that helped ruin President Jimmy Carter's hopes for a second term, some progressives wistfully desire one.

Aside from affecting this particular president, the debt-ceiling fight may also have repercussions on future presidents.

Now that the default weapon has been used so effectively, a precedent has been set. Future presidents could very well find themselves in the same position as Obama, having to cut deals to keep the nation from becoming the globe's biggest deadbeat.

Of course, some weren't left knocking the debris off themselves, like the president.

Republicans were left emboldened and more energized as they head towards 2012 and appeared relatively unscathed.

Republicans who control the House because they're in the majority and, to a certain extent, the Senate, because the minority there has the power to jam up the chamber until it gets its way, had a little more pep in their steps because of what they considered a significant victory.

"We've had to settle for less than we wanted, but what we've achieved is in no way insignificant. And we did it because we had something Democrats didn't. Republicans may only control one half of one third of the government in Washington. But the American people agreed with us on the nature of the problem.

For a while it looked as though Speaker John Boehner would be part of the debt-ceiling wreckage. He initially failed to get enough votes to pass a deal in the House last week, as the Tea Party members of his Republican conference rebelled against the deal.

But after adding some Tea Party sweeteners, including a requirement for a congressional vote on a balanced budget amendment and more measures to enforce spending cuts, on Monday Boehner was able to pass the deal with significantly more than 216 votes he needed, though it took Democratic votes to get him over the top.

So Boehner actually emerged from the smoke and dust having won a tough vote and quieting some if not all of his critics and doubters.

The debt-ceiling fight also left the U.S. role in the world diminished. As the New York Times' David Sanger wrote:

It has left America's creditors and allies alike wondering what had changed in American politics that a significant part of the country's political elite was suddenly willing to risk the nation's reputation as the safest place for the rest of the world to invest.

Last, but not least, the debt-ceiling fight left Americans with a lower opinion of their Washington policymakers, as if that was even possible. From the Pew Research Center:

From liberal Democrats to Tea Party Republicans, there is broad public consensus that the budget negotiat ions of recent weeks can be summed up in words such as ridiculous,disgusting, stupid, and frustrating. Nationwide, 72% describe the recent negotiations in negative terms such as these; while very few offer a positive (2%), or even neutral (11%), assessment. Other frequently used terms include terrible, disappointing, childish, and joke.