Accessibility links
Reid: GOP Must OK Tax Hikes Or Ax Falls On Defense : It's All Politics Democrats may have yielded on their demand for tax increases to achieve the debt-ceiling deal President Obama signed into law Tuesday. But in an interview on All Things Considered, Sen. Harry Reid had a warning for congressional Republicans: Later this year when Congress has to decide on additional ways to cut federal deficits, Democrats intend to stand firm on the need for more tax revenues. 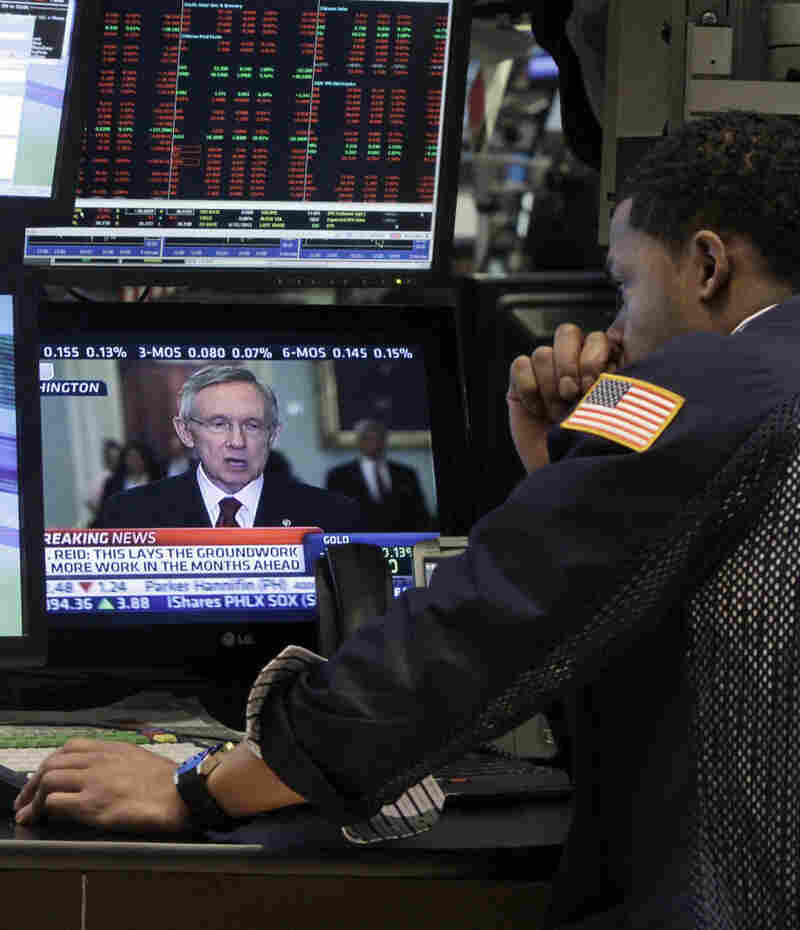 Sen. Harry Reid on a television on the floor of the New York Stock Exchange. Richard Drew/AP hide caption 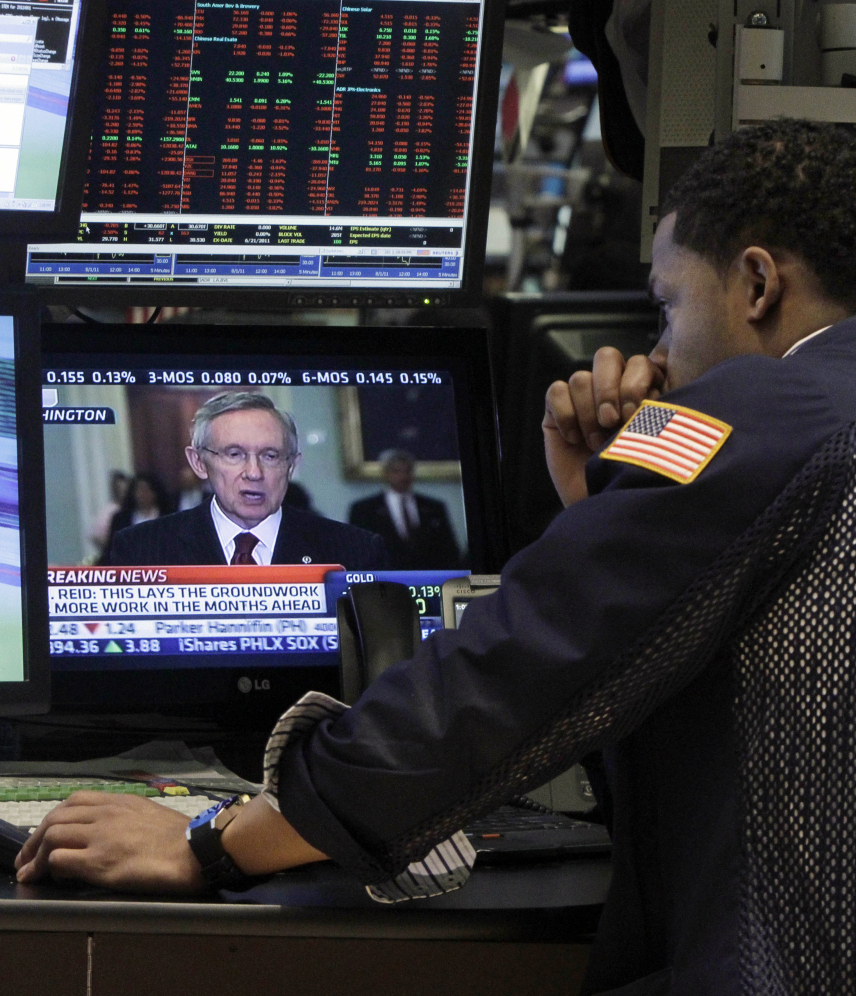 Sen. Harry Reid on a television on the floor of the New York Stock Exchange.

Democrats may have yielded on their demand for tax increases to Republicans to achieve the debt-ceiling deal President Obama signed into law Tuesday.

But Sen. Harry Reid had a warning for congressional Republicans when he talked Tuesday with Michele Norris, co-host of All Things Considered. Later this year when Congress has to decide on additional ways to cut federal deficits, Democrats intend to stand firm on the need for more tax revenues, the Senate majority leader said.

And if Republicans don't agree, the ax will fall, the Nevada Democrat said. The automatic, indiscriminate budget-slashing procedures built into the law will take effect and cut programs Republicans hold dear, like defense spending.

Reid's comment came in response to Michele asking him what he made of Republican vows that there would be no new revenues as part of a proposal by a joint congressional committee created by the new debt-ceiling law.

"They have to understand today, right now, the day that we passed the bill, that they will have no legislation coming out of that committee unless revenues are a part of the mix. It's a fact of life.

And if they don't like that, then they can look forward to the huge cuts that will take place in sequestration dealing with defense and some of their other programs will be cut, including mandatory programs, farm programs and things of that nature.

Reid said the agreement had the classic hallmarks of a compromise. Neither side was entirely pleased by the final deal. It was an outcome he said he was very familiar with:

"... I always find, even going back to the days that I practiced law, if people walk out of the room and parties are all disatisfied, that's a pretty good settlement.

And that's what we had here. No one was happy with it. But it was the right thing for the American people.

As details of the last minute negotiations have become public, Reid's counterpart on the Republican side of the aisle, Sen. Mitch McConnell (R-KY) has been portrayed as playing a critical role in the deal coming together with the White House and the Republican-controlled House. McConnell has done nothing publicly to dissuade anyone from that view. Or the perception that Reid was on the short end.

Michele asked Reid if this angered him:

No, no, i'm not angry. Mitch has always appeared to be trying to make the glass half full for him and half empty for me. We're very fortunate that Medicare, Medicaid and Social Security were not attached in any way.

It affects none of our beneficiaries. There were no benefit cuts. i wish we had been able to get some revenue because it's important that people who are making all these huge sums of money pay their fair share. The american people agree with that.

But i don't think it's important to talk about whether Democrats won or Republicans won. i think the american people won. We know we have to do more and I look forward to doing that.

Reid also discussed the partisan fight that has caused the partial shutdown of the Federal Aviation Administration which has had to furlough about 4,000 workers. In addition, more than 70,000 private-sector workers for contractors with construction and other projects overseen by those FAA workers, have also been sidelined.

While House Republicans' have objected as wasteful funding for the Essential Air Service which provides flights in and out of rural airports Reid, like other Democrats, said the dispute is really about Delta Air Lines wanting to thwart union organizing efforts.

"As a result of what Delta Air Lines has done, 80,000 people today are out of work. It has norhing to do with Essential Air Service. It has everything to do with their anti-union activities.

The FAA cannot go forward because of what the House has done. They're out of session now. And what they sent over here won't pass.

And in a chilling response, especially for affected workers and families, to a question from Michele as to how long the impasse might continue, Reid suggested it could go well past Congress' August recess. That could leave tens of thousands of people without paychecks for much more than a month.

It will be closed, may be not until September, maybe more than that.

Speaking of House Republicans, he said:

They've refused for more than a year to appoint conferees because they're unwilling to go forward with an issue because of the anti-union sentiment of Delta Air Lines.