Accessibility links
Bachmann, Pawlenty Rumble During GOP's Iowa Debate : It's All Politics Front-runner Mitt Romney had to be pleased that he was largely left unmolested by the seven other Republican presidential candidates ahead of this weekend's straw poll. Instead, the two Minnesotans, Rep. Michele Bachmann and former Gov. Tim Pawlenty, provided much of the night's fireworks. 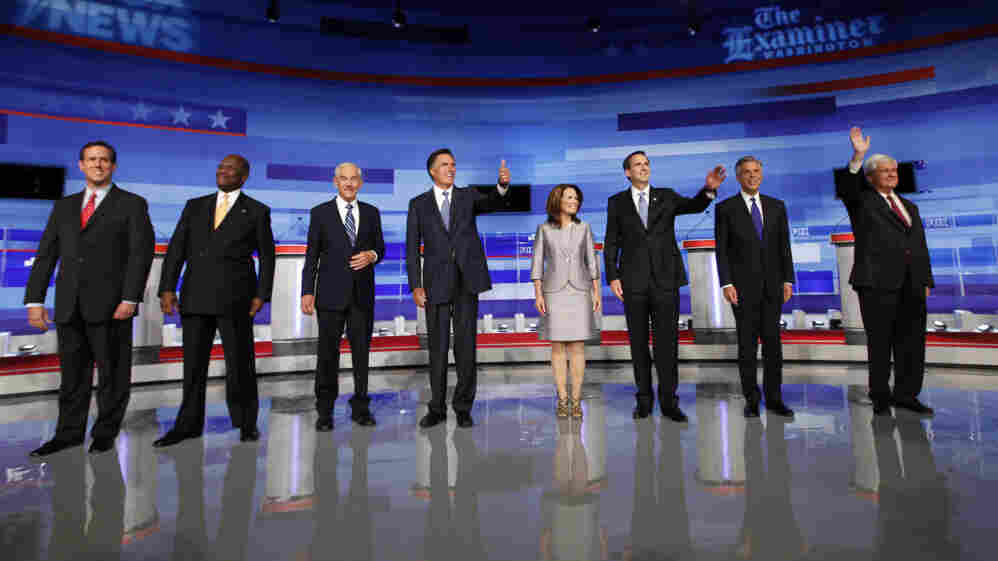 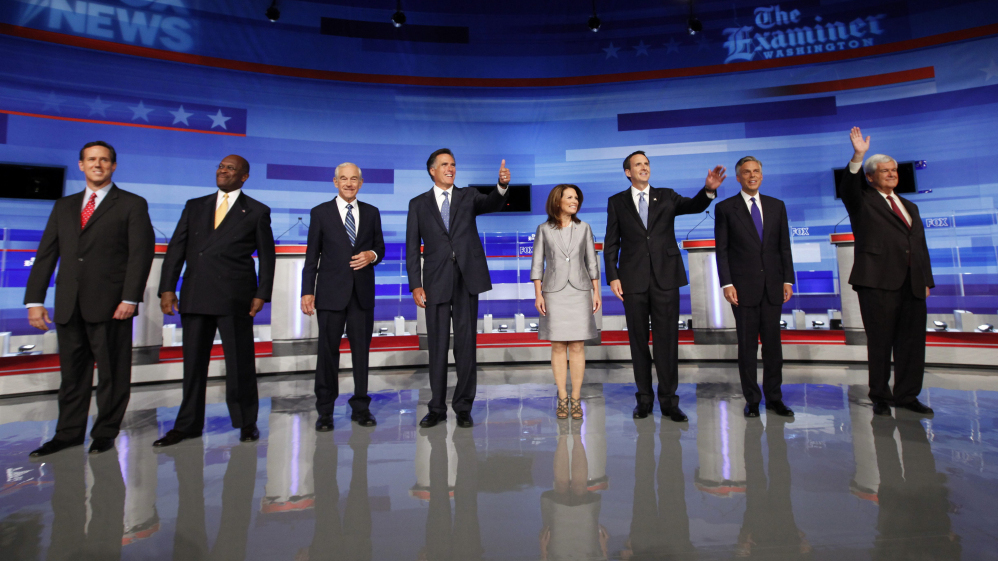 The front-runner for a major party's presidential nomination is always happiest when his intraparty rivals turn their attacks on each other instead of him.

So by that measure, Mitt Romney had to be very pleased indeed because he was left largely unmolested by the seven other Republican candidates contending for the party's presidential nomination at the debate at Iowa State University Thursday evening.

Instead of directing their attacks at Romney, the other candidates on the stage went after each other, with the two Minnesotans, Rep. Michele Bachmann and the state's former governor, Tim Pawlenty, providing much of the night's fireworks.

And when the two Minnesotans weren't cudgeling each other, Rick Santorum, the former U.S. senator from Pennsylvania, was going after Rep. Ron Paul of Texas and Bachmann.

And in some of the most baffling moments of the night, Newt Gingrich, the former House speaker, attacked the media.

For Bachmann and Pawlenty, their fight was mostly about getting the biggest bounce heading out of the debate and into Saturday's Ames Straw Poll.

Hailing from a neighboring state as they both do, they are counting on strong showings in the straw poll over the weekend to sustain their their candidacies through the next phase of the campaign.

The importance of such a showing for them only increases in light of the fact that Texas Gov. Rick Perry is about to enter the race Saturday and a recent poll had him virtually tied with Romney.

So the two attacked each other's records repeatedly in some of the most heated political debate moments in recent history. Pawlenty dismissed Bachmann's claims to leadership in the fight against the new health care law and the economic stimulus, saying she had accomplished little to nothing.

"If that's your view of effective leadership with results, please stop. You're killing us."

Pawlenty also got in a haymaker, noting Bachmann's "record of misstatements," a tendency that has been documented by PolitiFact.com, among others.

Bachmann, for her part, ticked off several pieces of Pawlenty's record from his time as governor — that he enacted a cap and trade regime in Minnesota and backed an individual health insurance mandate. She said:

"That sounds a lot like Barack Obama to me."

Meanwhile, Santorum and Paul clashed over foreign policy with the former Pennsylvania senator saying that the U.S. had been in hostilities with Iran since 1979. Paul corrected him, saying the bad blood actually began in 1953 when the CIA engineered the overthrow of Iran's elected leader. Then Paul argued to a seemingly incredulous Santorum that the nuclear bombs of the Soviet Union were a much bigger problem for the U.S. than Iran's getting a bomb would be.

This was all good for Romney since so long as his opponents tried to score points against one another during the two-hour debate, they weren't taking direct aim at him.

The one time a rival was invited to go after the frontrunner, it was Pawlenty who was urged by Fox News Sunday host Chris Wallace to take another whack at Romney over the Massachusetts health care legislation he signed into law as governor.

That law contained an individual mandate requiring most people to have health insurance and was the model for the federal law signed by President Obama. Pawlenty was widely seen as backing away from a fight at an earlier debate after he failed to follow-up on a pre-debate attack on what he called Obamneycare:

"I don't want to miss that chance again, Chris. Look, Obamacare was patterned after Mitt's plan in Massachusetts. And for Mitt or anyone else to say there aren't substantial similarities or they are not essentially the same plan — it just isn't credible. So that's why I called it Obamneycare, and I think that's a fair label. I'm happy to call it that again tonight."

Romney parried by repeating his defense that he viewed the Massachusetts law as a solution for his state but not necessarily for others.

Romney, who had already made a memorable comment earlier Thursday with his "corporations are people" remark at the Iowa State Fair, actually delivered another one at the debate.

Asked about the debt-ceiling deal and why he refused to support it, he said:

"I'm not going to eat Barack Obama's dog food. What he served up is not what I would have done if I'm president of the United States."

Romney's comment reflected his message discipline which was to go after Obama relentlessly and leave his rivals for the nomination to fight with each other.

Or with the media. At one point, Gingrich took to task the journalists posing queries to the candidates for asking "gotcha" questions.

Responding to a question from Wallace about the disarray in his campaign, Gingrich referred to an instruction by moderator and Fox News anchor, Brett Baier, to the candidates to shelve their canned stump speeches.

Romney wasn't the only debate winner. Obama was too since, for the most part, any Republican attacks on him were quickly obscured by the fog of war that rose from the GOP candidates' attacks on each other.

Meanwhile, waiting in the wings was Perry, the Texas governor, who didn't attend the debate but just as surely cast a shadow over it, with some of the candidates asked what they made of his johnny-come-lately entry.

All of them responded generously, welcoming him to the race. For Romney, however, Perry's presence is likely to mean the end of his being able to remain above the fray.

With his access to big donors with deep pockets and appeal to the social conservative base of the party, Perry could wind up testing Romney to the limits, setting up a lengthy primary fight resembling what the Democrats experienced in 2008.

The debate's biggest loser had to Jon Huntsman, Jr., a former Utah governor who also served in the Obama administration as ambassador to China.

The Iowa debate was his first and after a relatively weak performance, as well as reported troubles within his campaign, one question has to be just how many future debates will he participate in?