Accessibility links
GOP Primary Scramble: Voting May Start Early : It's All Politics When Arizona Gov. Jan Brewer announces her state's primary date this week, it could set off a scramble for influence in the GOP presidential primary sweepstakes. Voting in Iowa and New Hampshire could start as soon as December and absentee ballots could go out before Halloween. 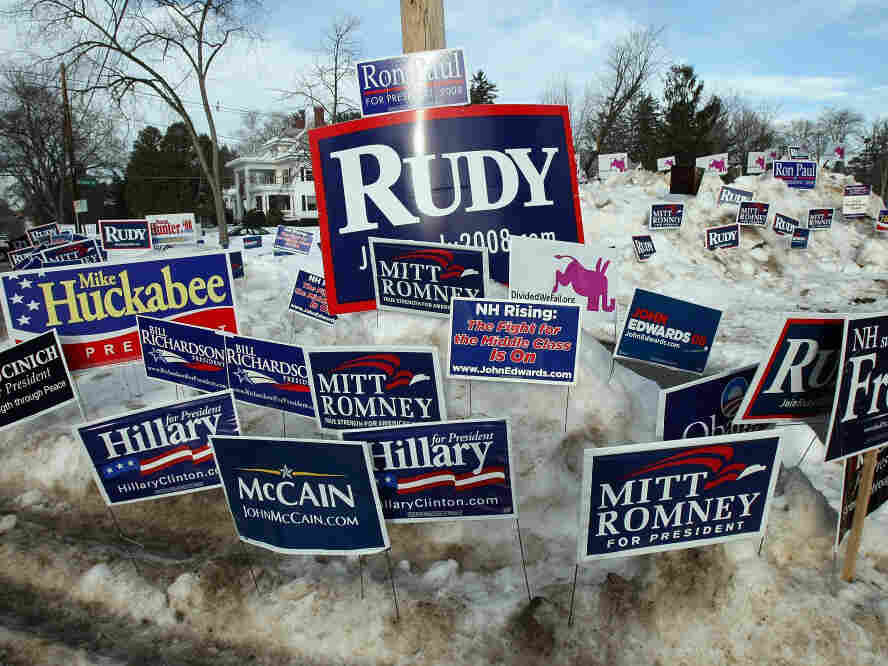 Campaign posters are seen in a snowbank outside a polling place in January 2008 in Manchester, N.H. Mario Tama/Getty Images hide caption

And Christmas....in Keokuk, or Keene?

On paper, it's scheduled to kick off Feb. 6 with the Iowa caucuses, followed a week later by New Hampshire's first-in-the-nation primary.

But those of you keeping score at home would be well advised to use a pencil.

At least three major states — Arizona, Michigan and Florida — are poised to bust up the plan and defy national Republican Party rules by scheduling primaries before "Super Tuesday" on March 6.

That's when four party-approved early contests in Iowa, New Hampshire, Nevada and South Carolina will be wrapped up, and, under party rules, when other states may schedule their contests. (States holding winner-take-all primaries are supposed to wait until April 1.)

First out of the box looks to be Arizona, where Republican Gov. Jan Brewer has to announce by Friday whether she plans to move that state's primary to Jan. 31.

Florida is also considering a late January primary. And Michigan is looking at a Feb. 28th contest.

The coming primary primacy tumult, during which the four early states will likely reschedule their contests to even earlier dates, is expected to exceed even that of 2008. During that cycle, calendar jockeying by states seeking earlier influence pushed up the Iowa caucuses to Jan. 3, and the New Hampshire primary to Jan. 8.

"It does appear that we are going into another holiday season with full campaigning and plenty of work for election officials," says Kay Stimson of the National Association of Secretaries of State (NASS).

"It's even more fluid this time around because states have sought more leeway in setting their dates" since last primary season, Stimson says.

Some primary watchers, like Josh Putnam at Davidson College, suggest that the primary and caucus season could began as early as the first week in December. Putnam is an assistant political science professor who maintains an exhaustive blog about primary permutations.

The party rules preventing a stampede to the front of the line appear meant to be broken. Especially when the national party has shown little stomach for punishing deadline jumpers with sanctions that would hurt.

The RNC earlier this year voted down a proposal that would have stripped offending states of convention perks ranging from VIP passes to the snazziest hotel accommodations.

"We're not chasing any other state," says Michigan's Sal Anuzis, a member of the Republican National Committee. "We already have a statutory primary scheduled for [Feb. 28]."

"It would be cheaper than holding a special election on March 6," he said, adding: "And it would give us more influence."

Arizona's governor has since 1996 had the flexibility to schedule the state's primary, says Stimson of NASS, but states like Georgia, Florida and Michigan recently enacted new laws that make it easier to move contest dates.

In Michigan, the state's House speaker and Senate president, both Republicans, have been given authority to schedule the primary between Feb. 28 and March 6. Florida has entrusted the decision to a committee that has until October to set a date.

And Georgia law now reflects that of New Hampshire: it allows the secretary of state to set the date.

You can bet that New Hampshire Secretary of State William Gardner is watching closely, and likely not planning any holiday season travel this year.

One other factor that has to be considered in the coming cycle: a new provision in the 2010 National Defense Authorization Act requires that absentee ballots have to be mailed to members of the military serving overseas at least 45 days before an election.

With primary watchers like Putnam calculating that the New Hampshire primary could be held as early as Dec. 13, ballots for that contest would have to be mailed before Halloween. Now that's scary.