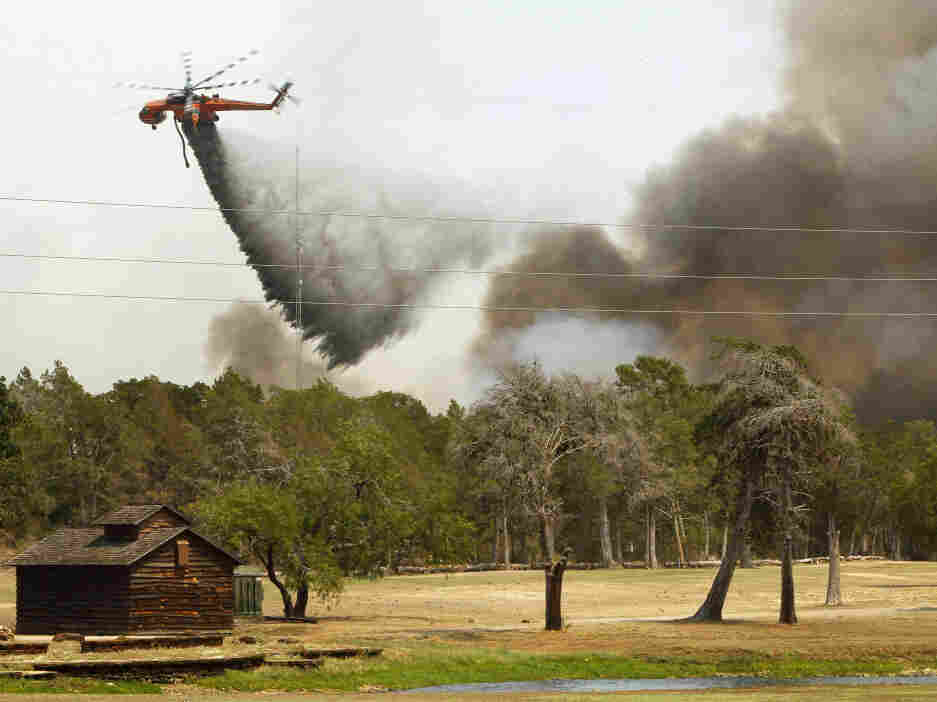 Firefighting helicopters dump water and flame retardant after loading up with water from a pond at Lost Pines Golf Club as they fight a fire in Bastrop State Park on September 6, 2011 in Bastrop, Texas. Erich Schlegel/Getty Images hide caption 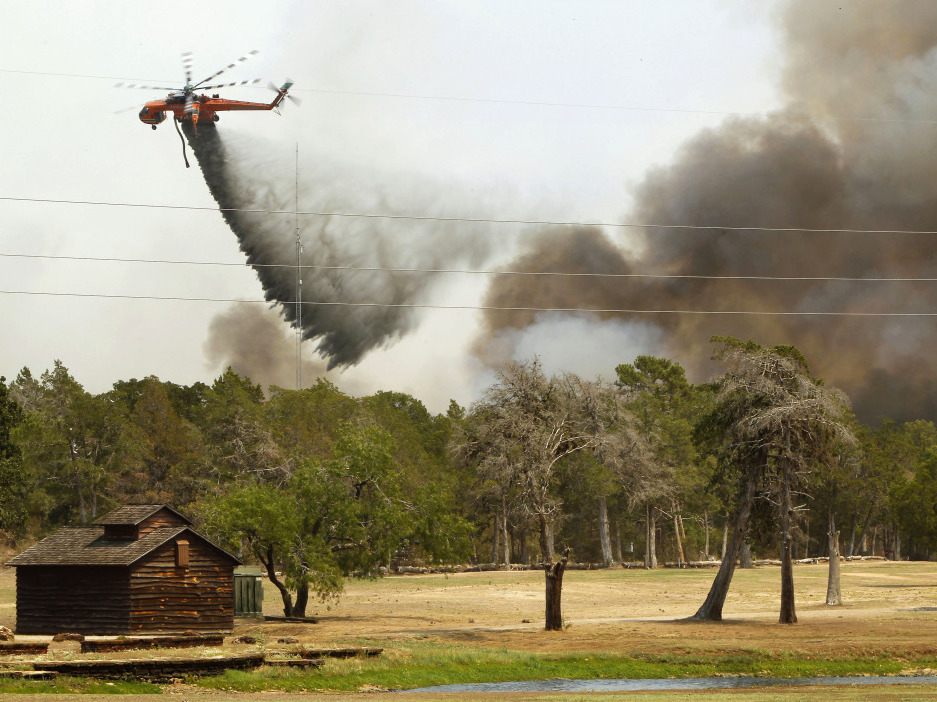 Firefighting helicopters dump water and flame retardant after loading up with water from a pond at Lost Pines Golf Club as they fight a fire in Bastrop State Park on September 6, 2011 in Bastrop, Texas.

Rick Perry heats up the atmosphere every time he talks about climate change. He's an avowed global warming doubter who once quipped, "The biggest source of carbon dioxide is Al Gore's mouth."

Perry set off the debate again in New Hampshire recently when he said, "I think we're seeing weekly, and even daily, scientists who are coming forward and questioning the original idea that manmade global warming is what is causing the climate to change."

He went further in his book, Fed Up: "The complexities of the global atmosphere have often eluded the most sophisticated scientists."

One of those scientists who disagreed with Perry's pronouncements was Dr. Andrew Dessler, professor of atmospheric sciences at Texas A&M University, Perry's alma mater. Dessler coathored The Science and Politics of Global Climate Change: A Guide to the Debate.

Last week, I drove to College Station to talk with Andy Dessler about the renewed firestorm over global warming. This was the week before actual firestorms roared across Central Texas, killing four people, burning 1,000 homes, and forcing thousands to evacuate. The punishing drought played a major role in the wildfire outbreak, the worst in Texas history, and Dessler says there's an unmistakable connection between the drought and climate change.

"We can't say climate change is causing the extreme weather Texas is having right now. On the other hand, we can say humans have increased the temperature of the base climate state pretty much everywhere. And what that means is it makes the heat more extreme and increases evaporation from the soil. We can be confident we've made this hellish summer worse than it would have been."

Perry and four other candidates for the GOP nomination openly question the validity of human-influenced global warming, which puts them all out of step with their own party's platform. The platform of the 2008 Republican National Convention included this line: "The same human activity that has brought freedom and opportunity to billions has also increased the amount of carbon in the atmosphere."

For the record, the US National Academy of Sciences, along with the science academy of every major industrialized nation, believes that human activities — such as burning fossil fuels and cutting forests — contribute to increased concentrations of greenhouse gases in the atmosphere, which is heating the planet.

Dessler is not surprised anymore by the vehemence of the emails he receives from people who believe he is perpetrating a fraud.

The messenger is Andy Dessler and the great majority of other climate scientists who believe human activity is warming the planet.

So what's a Texas solution to global warming?

A few years ago, I was interviewing a West Texas cotton farmer who had become an evangelist about the wind turbines that were beginning to pop up around Abilene. They were an unusual sight back then. The farmer said some travelers on Interstate 20 stopped him in a rest area one day and asked what those huge spinning blades were doing.

"Well," the farmer answered evenly, "when it gets too hot around here, we just turn 'em on and it cools off the country."