Accessibility links
Obama Argues For Jobs Plan, Pressures GOP To Act : It's All Politics With the nation facing the specter of a renewed recession and Washington virtually paralyzed by partisan gridlock, President Obama sought to pressure GOP lawmakers in his speech to a joint session of Congress. He dared the Republican-led House to block his proposals for a new stimulus of targeted tax cuts and spending. 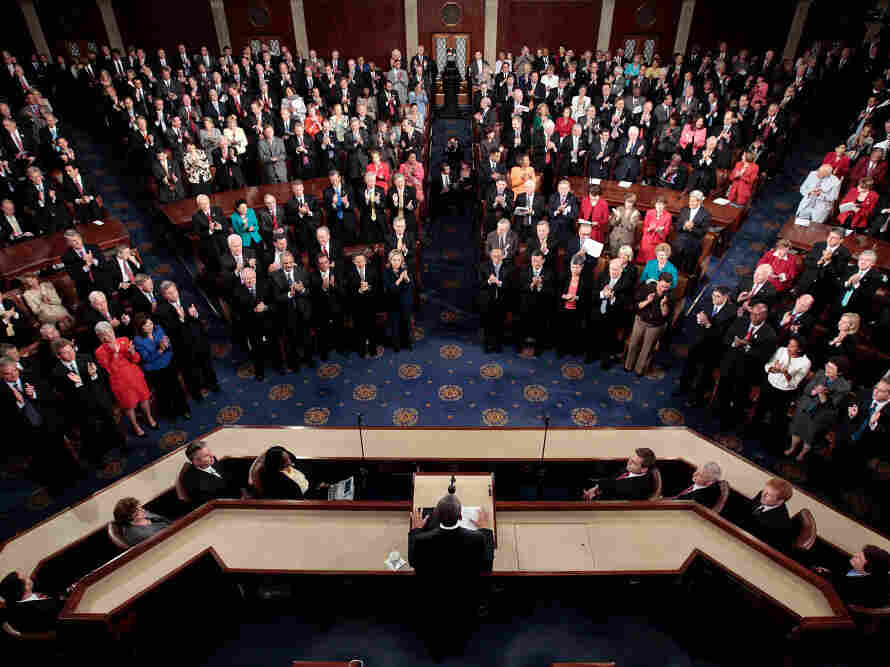 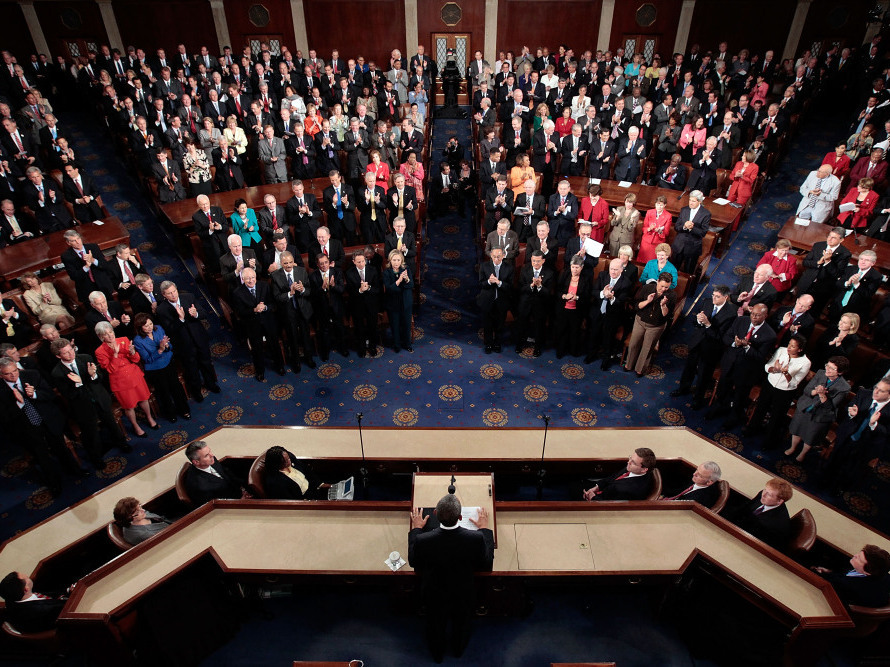 President Obama outlines his jobs plan to a joint session of Congress, September 8, 2011.

With the nation facing the specter of a renewed recession and Washington virtually paralyzed by partisan gridlock, President Obama sought to turn the screws on Republican lawmakers in his much anticipated speech Thursday to a joint session of Congress.

Obama essentially dared the Republican-led House to block his proposals to provide fiscal stimulus (though he never used that word) to the economy through a series of tax cuts and spending measures estimated to cost of $450 billion and aimed at reducing the nation's 9.1 percent unemployment rate.

As has been apparent ever since details of the president's plans started to emerge in recent weeks, the president intended to try and put Republicans on the spot by proposing ideas they have supported in the past. Those included payroll tax cuts for employers and a public-private infrastructure bank to fund the building or repair of highways, bridges and schools.

Fully aware that many if not all of his proposals would likely be rejected by GOP lawmakers who argue that spending and tax cuts as well as fewer regulations are what's needed, Obama's speech was as much about framing the terms of the 2012 general election as getting anything passed.

Positioning congressional Republicans to take the blame if they let his proposals die and preparing the ground to campaign against a do-nothing Congress if need be, Obama described the economic revival his plan would create.

The purpose of the American Jobs Act is simple: to put more people back to work and more money in the pockets of those who are working. It will create more jobs for construction workers, more jobs for teachers, more jobs for veterans, and more jobs for the long-term unemployed. It will provide a tax break for companies who hire new workers, and it will cut payroll taxes in half for every working American and every small business. It will provide a jolt to an economy that has stalled, and give companies confidence that if they invest and hire, there will be customers for their products and services. You should pass this jobs plan right away.

Everyone here knows that small businesses are where most new jobs begin. And you know that while corporate profits have come roaring back, smaller companies haven't. So for everyone who speaks so passionately about making life easier for "job creators," this plan is for you.

In case anyone doubted that he planned to raise the pressure on congressional Republicans, Obama also warned he would be taking his case directly to the American people.

OBAMA: Regardless of the arguments we've had in the past, regardless of the arguments we will have in the future, this plan is the right thing to do right now. You should pass it. (Applause.) And I intend to take that message to every corner of this country. (Applause.) And I ask — I ask every American who agrees to lift your voice: Tell the people who are gathered here tonight that you want action now. Tell Washington that doing nothing is not an option. Remind us that if we act as one nation and one people, we have it within our power to meet this challenge.

Some of those arguments, including the mid-summer debt-ceiling fight, left the president looking weaker, a perception amplified by the downgrading of the nation's debt by the Standard & Poors credit rating agency.

That fight and the resulting fallout contributed to the sense among growing numbers of voters that the nation was adrift and that the president, while likable, lacked what it takes to get the nation out of its economic doldrums and crisis of confidence. The Republican presidential candidates have exploited those perceptions.

Thus, Obama's speech was partly meant as reassurance to the nation that he, indeed, does have a plan to improve the economy and get millions of unemployed Americans back to work.

To that end, Obama sounded an optimistic note:

These are difficult years for our country. But we are Americans. We are tougher than the times we live in, and we are bigger than our politics have been. So let's meet the moment. Let's get to work, and let's show the world once again why the United States of America remains the greatest nation on Earth.

The president also struck his by-now familiar populist theme that the wealthy should pay more of the costs of government and the middle-class less. He tweaked Republicans for being adamantly anti-tax, to a point. While Republicans readily fought against higher taxes on the superwealthy they seemed less concerned about the middle-class tax burden, he said.

I know that some of you have sworn oaths to never raise any taxes on anyone for as long as you live. Now is not the time to carve out an exception and raise middle-class taxes, which is why you should pass this bill right away.

In a passage meant to reassure Democrats who have accused him of caving to Republican demands too often in the past, Obama vowed there were concessions he would not make. If Republicans wanted to dismantle the progressive legacies of both Republican and Democratic administrations and Congresses, they could count on his resistance.

OBAMA: But what we can't do — what I will not do — is let this economic crisis be used as an excuse to wipe out the basic protections that Americans have counted on for decades. (Applause.) I reject the idea that we need to ask people to choose between their jobs and their safety. I reject the argument that says for the economy to grow, we have to roll back protections that ban hidden fees by credit card companies, or rules that keep our kids from being exposed to mercury, or laws that prevent the health insurance industry from shortchanging patients. I reject the idea that we have to strip away collective bargaining rights to compete in a global economy. (Applause.) We shouldn't be in a race to the bottom, where we try to offer the cheapest labor and the worst pollution standards. America should be in a race to the top. And I believe we can win that race. (Applause.)

Meanwhile, as he has in the past, Obama tried to reframe the definition of what passes for responsible governing. It's not just about cutting spending. It's also about spending to create the conditions for future American prosperity, he said.

It's about one generation investing to benefit future ones. He was rejecting the conservative argument that the only definition of generational fairness is to focus solely on the debt that's left for those who come later to pay.

OBAMA: Ask yourselves — where would we be right now if the people who sat here before us decided not to build our highways, not to build our bridges, our dams, our airports? What would this country be like if we had chosen not to spend money on public high schools, or research universities, or community colleges? Millions of returning heroes, including my grandfather, had the opportunity to go to school because of the G.I. Bill. Where would we be if they hadn't had that chance? (Applause.)

With the president asking for more spending, it was a foregone conclusion well before the speech that that congressional Republicans would be tepid if not openly hostile to his proposals.

While some conservatives dismissed the president's ideas even before he delivered his speech, House Speaker John Boehner at least publicly wanted to leave the impression that he was at least open to some of what the president proposed. Boehner said in a statement:

The proposals the President outlined tonight merit consideration. We hope he gives serious consideration to our ideas as well. It's my hope that we can work together to end the uncertainty facing families and small businesses, and create a better environment for long-term economic growth and private-sector job creation."