Accessibility links
Tea Party Debate: Can Romney, Bachmann Rebound? : It's All Politics The notion of "bounce-back potential" actually has much bearing on the GOP's Tea Party-sponsored debate Monday night. Because whether Mitt Romney and Michele Bachmann can rebound and by how much are critical questions to their political futures. 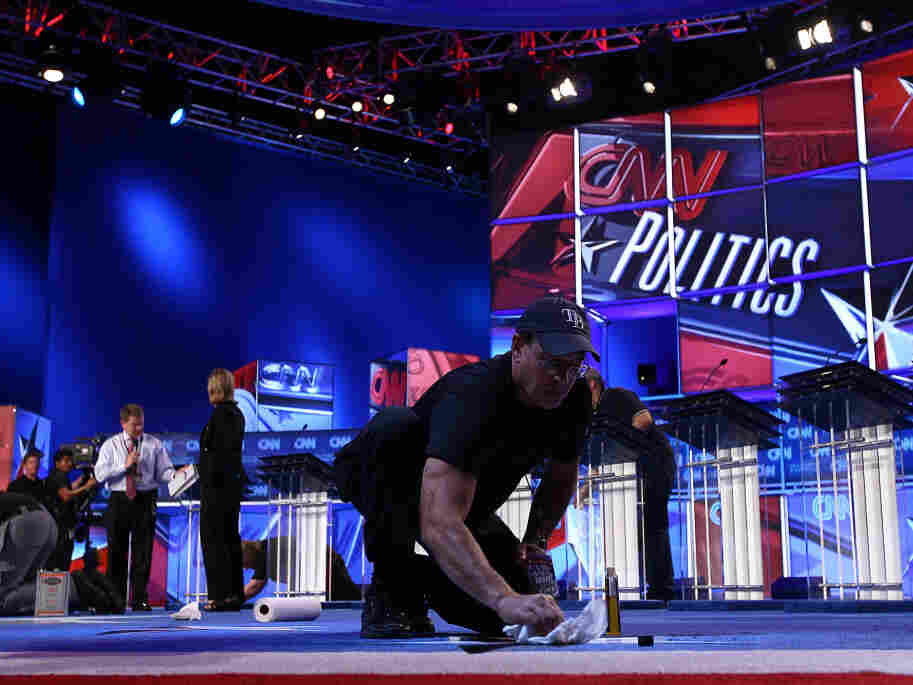 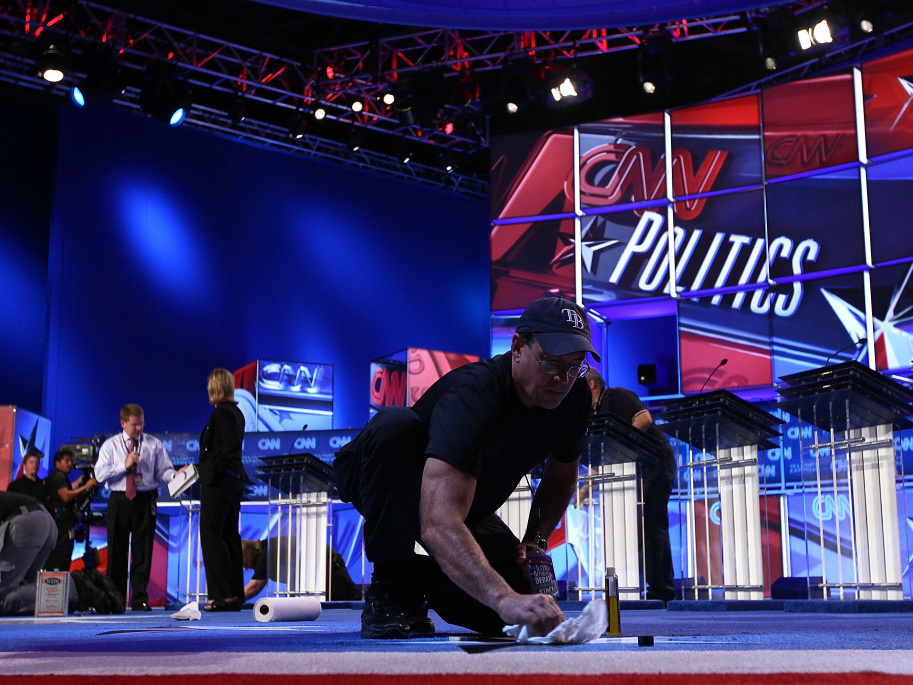 A worker cleans the stage for Monday evening's Republican presidential debate sponsored by CNN and the Tea Party Express, Sept. 12, 2011.

Hard on the heels of last week's Republican presidential candidate in which Texas Gov. Rick Perry made his first appearance, comes another gathering, this one hosted by the Tea Party Express and carried by CNN Monday night at 8 pm ET.

The debate from Tampa, Fl. will be going up against what many Americans consider a far more important event on the other side of the state, — the opening game in the Monday Night Football season which finds the New England Patriots squaring off against the Miami Dolphins at Sun Life Stadium.

The Patriots, led by the aging Tom Brady (he's 34) are heavy favorites to beat the Dolphins whose quarterback, Chad Henne, had a habit last year of throwing the ball to players in the opposing teams' uniform.

Not everyone has written Henne off yet. ESPN sports analyst Rivers McCown writes:

We're not saying the Henne tale ends with him being an elite quarterback, but there is more bounce-back potential than you might think.

The notion of "bounce-back potential" actually has much bearing on the GOP's Tea Party sponsored debate Monday, too. Because whether Mitt Romney and Rep. Michele Bachmann can rebound and by how much are critical questions for their political futures.

In a CNN/Opinion Research poll, Perry maintained frontrunner status, with a 12 percentage point lead over Romney, the prior frontrunner.

So one question going into tonight's debate was, would Romney be able to change the race's dynamic's enough to regain the lead, to rebound, in other words?

Romney clearly believes Perry has left him an opening, with the Texas governor's intemperate remarks about Social Security being a "Ponzi scheme" that make it far easier for his rivals to brand him an extremist.

That the debate is taking place in Florida, a political battleground state with the second largest number of Social Security beneficiaries, 3.7 million as of December 2009, behind California and ahead of New York, is one of those delightful ironies that makes politics so much fun to follow.

Because Florida has so many retirees and is a much sought after prize in the contest for Electoral College votes, Romney will have a strong backdrop for his argument that Perry's beyond-the-mainstream views on Social Security make the Texan unelectable in a general election.

Perry won't likely turn the other cheek to such an attack, however. One of his best lines to criticize Romney in a Tea Party-sponsored debate would arguably be to home in on the former Massachusetts governor's health care law which, with its individual mandate, was the template for the federal legislation President Obama signed into law last year.

The Tea Party gained much of its momentum from its members opposition to the Obama law so attacking Romney on this would be in keeping with that recent history.

Meanwhile, Rep. Michele Bachmann's fortunes, at least in terms of public opinion, have declined so precipitously that she was polling in the same range as Newt Gingrich and Herman Cain.

She's at four percent while the CNN/Opinion Research poll placed both the former House speaker and erstwhile pizza executive, respectively, at five percent.

A few months ago Bachmann, a Tea Party darling, rode a strong performance at an earlier debate to strong double digit support that placed her right behind Romney in national polls and helped her win the Ames Straw Poll in Iowa.

But that was then. Much of her support has gone to Perry whose appeal to Tea Party activists has outdone hers.

So if she is to rebound, the question for her to be what can she possibly do or say? The answer appears to be that there's very little she can do now that Perry and, to a degree, Romney are splitting her supporters.

Still, unless she has totally given up any hope of a comeback, she can be expected to be more aggressive than she was last week for which she was partly blameless since she wasn't asked a question until about 15 minutes into the debate.