Accessibility links
Poverty Rise Boosts Challenges For Obama, Republicans : It's All Politics While the latest numbers on poverty obviously reflect an unwelcome situation for the very real people represented by the data, it's also bad news for President Obama who faces re-election next year. 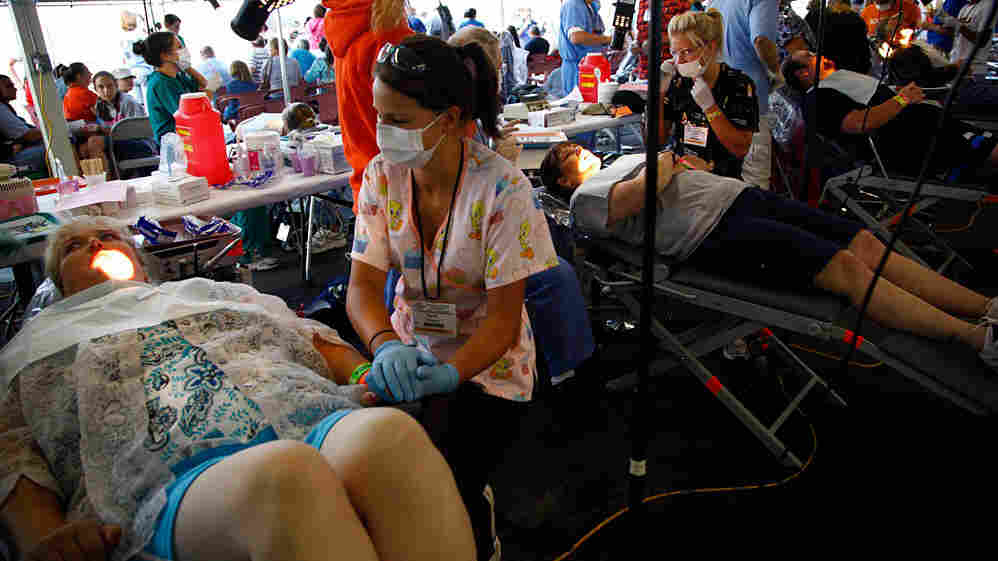 Some of the hundreds of the financially strapped who came to Wise, VA in 2009 for free dental and medical care. Becky Lettenberger/NPR hide caption

The poor are always with us. And now there are even more of them than they're used to be, according to the Census Bureau's report Tuesday which indicated that the povery rate rose between 2009 and 2010. The rate increased to 15.1 percent from 14.3 percent, the agency said.

The gloomy report, which also contained the information that median income in the U.S. fell 2.3 percent to $49,445 during the same period, added to the general sense of an economy inflicting tremendous pain on millions of Americans.

The recession between 2007 and 2009 which left the economy in a weakened state continues to create economic carnage. And the end isn't yet in sight.

While the latest numbers on poverty obviously reflect an often dire situation for the very real people the data represent, it's also bad news for President Obama who faces re-election next year.

It adds to the general sense of economic gloom facing the American people, not the kind of climate conducive to winning a second term.

It also contributes yet another counterweight to his efforts to get a struggling economy growing more robustly.

His political opponents wasted little time in blaming him for the higher poverty level.That the trend in the poverty rate over the last ten years has generally been upward didn't seem to matter to them.

The new numbers place an even greater burden on him to expand the safety net for the poor whose numbers are increasing.

Unfortunately, that come at a time when the federal policymakers are trying to find trillions of dollars in spending cuts over the next ten years.

Pressure is also likely to increase on Obama to discuss poverty openly, something he has been criticized for not doing nearly enough.

Meanwhile, there's pressure on Republicans as well. If you wait for poverty or income inequality to be mentioned at the average Republican debate, you'll be waiting for a long time.

If Republicans can be said to have an anti-poverty agenda, it would be their argument for supply-side economics with its insistence on low taxes and fewer regulations as drivers for economic growth that, they say, would create more jobs and alleviate poverty.

That the same agenda precisely fits the self-interests of many wealthier Americans is generally viewed by those proposing it as a happy coincidence.

But with poverty growing and so much suffering across the nation, the pressure will only grow on Republicans to speak directly to the concerns of that expanding pool of Americans who meet the government poverty definition.

As Robert Greenstein, president of the Center for Budget and Policy Priorities, which focuses on issues of poverty, wrote in reaction to the new data:

These grim figures come in the midst of an emerging debate about the appropriate role of government not only in spurring economic growth but also in addressing hardship. Federal policymakers will have to decide soon whether to extend certain federal initiatives that were designed both to promote growth and to ease poverty and hardship during the economic downturn, such as extended unemployment insurance benefits. Of particular note, Congress could make deep cuts in basic low-income assistance as part of its efforts to reduce long-term deficits, such as through a plan that the new Joint Select Committee on Deficit Reduction is supposed to craft by Thanksgiving.

The extent and depth of poverty in coming years and decades will be strongly affected by whether the Joint Committee, and Congress as a whole, adhere to a core principle that the commission chaired by Erskine Bowles and Alan Simpson set forth in its report and the Senate's "Gang of Six" sought to honor in its plan — that deficit reduction should be designed so that it does not increase poverty and should therefore shield low-income assistance programs from cuts — or whether the Joint Committee and Congress instead impose significant cuts in programs for those at the bottom of the income ladder.

As Census officials and Greenstein noted Tuesday, it was only the safety net programs that are now threatened with cuts that kept the poverty rate from going even higher than it already has.