Accessibility links
Romney, Perry Come Out Swinging At Debate : It's All Politics Former Massachusetts Gov. Mitt Romney made the most of his opportunities not only to raise doubts for voters about Texas Gov. Rick Perry's hostility towards Social Security as a federal entitlement but Perry's character. 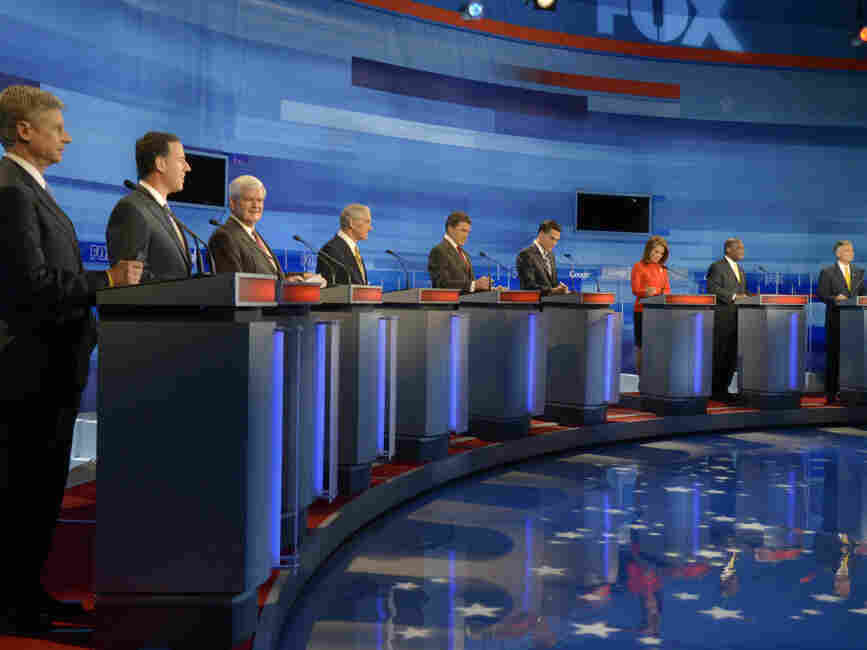 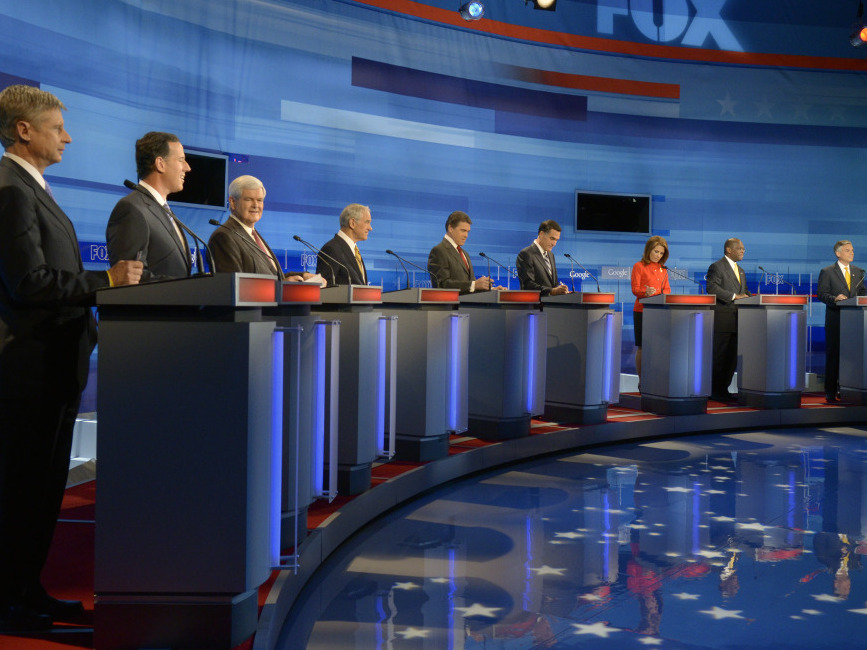 Accepting the premise that the race for the Republican presidential nomination has come down to a two-man contest between the frontrunner Texas Gov. Rick Perry and Mitt Romney, the former Massachusetts governor, the question is which of those two candidates helped himself the most in Thursday evening's debate in Orlando, Fla.?

Looked at that way, the answer has to be Romney. The former front-runner not only appeared to have the advantage over Perry in terms of stamina during the two-hour session hosted by Fox News and Google, he also made his points with more coherence and force.

Having gone through the rigors of a presidential race before, Romney knows how to prepare for these debates and it showed.

Romney was disciplined, well-rehearsed and crisp, as one might expect from a one-time CEO of a private-equity firm. Thus, he made the most of his opportunities not only to raise doubts for voters about Perry's hostility towards Social Security as a federal entitlement but Perry's character.

Romney had essentially two lines of attack on Perry. He kept on the offensive on Social Security, defending the popular program against Perry's rhetorical assault on it. Judging from Romney's use of the issue, he's decided it's perhaps his best chance to ding Perry, especially in Florida with its large number of Social Security recipients.

The former Massachusetts governor combined hitting Perry on Social Security with an expansion of another criticism of the Texas governor Romney made at a previous debate at the Reagan Library in California, to wit, that Perry's a flip flopper.

It's one of the oldest tricks in politics, to neutralize your opponent's attack by accusing him of doing the exactly what you're accused of, making him seem hypocritical.

And Perry has given Romney an opening for this by backpedaling from the full-throated indictment of Social Security he made in his book "Fed Up."

By contrast, Perry seemed flat literally from the start. He got the first question, from a small businessman who, via a YouTube video, asked Perry what he would do to "incent" a small business person like himself to hire. Brett Baier expanded on the question, asking why Perry, unlike the other candidates on the stage, didn't have a jobs plan.

Perry basically said the equivalent of "watch this space" in terms of the plan. Then he essentially said Texas was his jobs plan, as if invoking the state's economic success was all the answer the small businessman who asked the question needed to be encouraged.

For his part, Perry came prepared to be on offensive as well. He wanted to reinforce the view that Romney couldn't be trusted because of his reputation for shifting his positions with changes in the political winds.

But Perry never really connected seriously with any of his attacks on Romney along this line. If there was a quintessential moment that captured how Perry's strategy failed, it was an exchange with Romney that occurred well into the debate. Perry seemed to lose his train of thought just at the moment when he was supposed to be delivering the coup de grace to Romney.

GOV. PERRY: I think Americans just don't know sometimes which Mitt Romney they're dealing with. Is it the Mitt Romney that was on the side of — against the Second Amendment before he was for the Second Amendment? Was it — was before — he was before the social programs from the standpoint of — he was for standing up for Roe versus Wade before he was against first — Roe versus Wade? Him — he was for Race to the Top. He's for "Obamacare" and now he's against it. I mean, we'll wait until tomorrow and — and — and see which Mitt Romney we're really talking to tonight.

It was a painful to watch.

Romney, sensing Perry was on the debate ropes, said "nice try" and then went in for the kill:

Governor Perry, you wrote a book six months ago. You're already retreating from the positions that were in that book.

Romney also got the best of Perry in an exchange over illegal immigration. Slamming Perry's support for a Texas version of the DREAM Act which allows the children of illegal immigrants to get in-state tuition, Romney said:

When he had his chance to respond, Perry said:

... But if you say that we should not educate children who have come into our state for no other reason than they've been brought there by no fault of their own, I don't think you have a heart. We need to be educating these children because they will become a drag on our society.

I think that's what Texans wanted to do.

Judging from the boos from some in the audience and how most others sat on their hands, Perry lost this round, too, at least with the Republican primary electorate.

Rick Santorum, the former U.S. senator from Pennsylvania, who has had some of the sharpest criticisms of Perry recently delivered yet another:

MR. SANTORUM: Governor Perry, no one is suggesting up here that
-- that you're — the students that are illegal in this country
shouldn't be able to go to a college and university. I — I think
you're sort of making this leap that unless we subsidize this — the
taxpayers subsidize it, they won't be able to go. Well, most folks
who want to go to the state of Texas or any other state out of state
have to pay the full boat. (Cheers, applause.) The point is why are
we — not that — not that they can't go. They can go. They just
have to borrow money — find other sources to be able to go. And — and — and why should they be given preferential treatment as — as an illegal in this country? (Cheers, applause.) That's what we're
saying.

To this, Perry made the mistake sometimes seen in courtrooms of asking a question he didn't know the answer to. He indignantly asked Santorum if he had ever been to the Texas border, as if to say the Pennsylvanian didn't understand the issue.

GOV. PERRY: I'm surprised if you have, but you weren't paying
attention, because the idea --

For many Republicans who have told pollsters that Perry is their top choice and who are turned off by Romney, the Texas governor's debate performance may not matter. They may want a conviction politician so much that they will pick Perry over Romney who has never been mistaken for one.

But, given what they've seen so far, others must be asking themselves if Perry will be ready to go head-to-head with President Obama.

Aside from the Perry-Romney duel, there was the unfinished business from the last debate of Rep. Michele Bachmann and the HPV vaccine. Baier asked the Minnesota congresswoman the inevitable question: did she still stand by her comment that a woman who approached her after the last debate had told her a daughter became "mentally retarded" after getting the HPV vaccine?

Further, did she stand by her comment that the vaccine was dangerous even after medical authorities uniformly refuted her claim and called the congresswoman perilous to public health?

Bachmann said don't shoot the messenger, then quickly pivoted to an attack on Perry's 2006 executive order that required 12-year old girls in Texas to receive the vaccine.

REP. BACHMANN: Well, first, I didn't make that claim, nor did I make that statement. Immediately after the debate, a mother came up to me, and she was visibly shaken and heartbroken because of what her daughter had gone through, and so I only related what her story was.

But here's the real issue. Governor Perry mandated a health care decision on all 12-year-old little girls in the state of Texas...

Perry defended himself by saying he had been lobbied on the issue by a 41-year old woman who had cervical cancer. According to reports, however, he met with the woman after he signed the executive order.

As for the most memorable line of the evening, it came not from Perry, Romney or Bachmann or any of the other well known names on the stage but from Gary Johnson. The former New Mexico governor has been shut out of most other debates because he barely registers in national polls.

To the question, what would he do to turn the country around, Johnson started with this:

That brought the house down.

After the laughter stopped he got serious.

Balance the federal budget now. Not 15 years from now, not 20 years from now, but now. And throw out the entire federal tax system, replace it with the fair tax, a consumption tax that by all
measurements is just that; it's fair. (Bell rings.) It does away with corporate income tax. If that doesn't create tens of millions of jobs in this country, I don't know what does. (Cheers, applause.)

Johnson's answer spoke to something about these pre-primary debates that happens to greater or lesser degrees in both parties. Because debates at this stage are about appealing to the party's base, many of the offered solutions have a fantasy element to them.

What's the real likelihood that the federal budget running a $1.4 trillion deficit could be balanced "now" or that we would ditch the current tax system for a consumption tax? And where's the evidence that it would create tens of millions of jobs?

And it wasn't just Johnson, who barely can get into the debates, who was guilty of this.

As PolitiFact noted, Romney's accusation that Obama has gone around the globe apologizing for the U.S. just doesn't stand up to scrutiny. Indeed, after a fairly extensive scrub of the record, PolitiFact awarded its "pants on fire" grade because the charge is so brazenly fanciful.

It was at the end of the debate that Paul had a chance to let the audience know, in case they hadn't noticed, that he had some momentum. When the candidates were asked by a voter via another YouTube video who on stage he or she might choose as a vice presidential pick, Paul said:

I — I don't plan to make a choice at the moment because I am on national polls. It seems like I'm in third place now. I think it would be inappropriate.

As soon as — (applause) — as soon as I'm one of the two top
tier, then I will start thinking along that line.

Gingrich and Cain, through no fault of their own, became something of a weird thought experiment when Perry said he wished he could create a vice presidential pick by "mating" those two men.

MR. HUNTSMAN: You know, I'm tempted to say that when all is said
and done, the two guys standing in the middle here, Romney and Perry, aren't going to be around because they're going to bludgeon each other to death. (Laughter.)

But I'm also reminded of about four years ago, we had two front-
runners in similar situations, one by the name of Rudy Giuliani, I
think, and the other by the name of Fred Thompson. They seemed to disappear altogether. I can't remember where they went.

All indications are that whereever they went, he's likely to join them.