Accessibility links
As Anita Perry Hits Campaign Trail, Five Things You Should Know : It's All Politics When Texas Gov. Rick Perry announced plans to run for president, his wife, Anita, urged him to get out of his "comfort zone." As she hits the trail in Iowa this week, we offer a brief look at her time as a nurse and advocate in the Lone Star State. 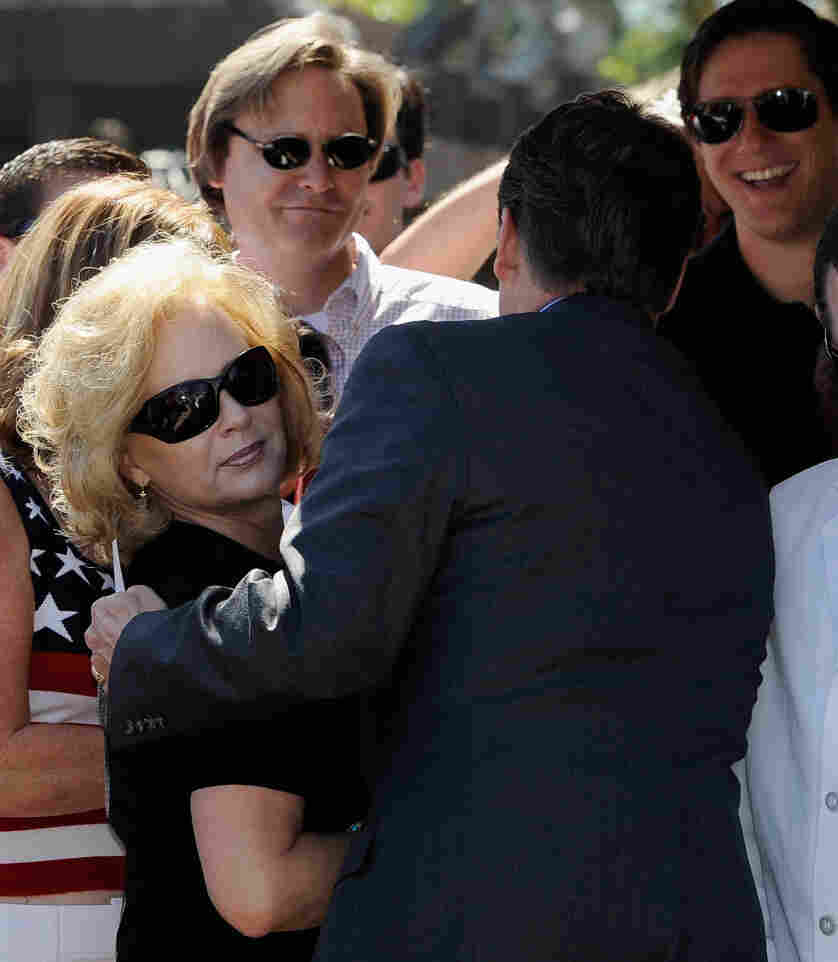 Anita Perry is increasingly stepping out from behind her husband, Republican presidential candidate and Texas Gov. Rick Perry. Wednesday she'll campaign solo in Iowa. Here they greeted supporters together during a rally on Sept. 8 in Newport Beach, Calif. Kevork Djansezian/Getty Images hide caption 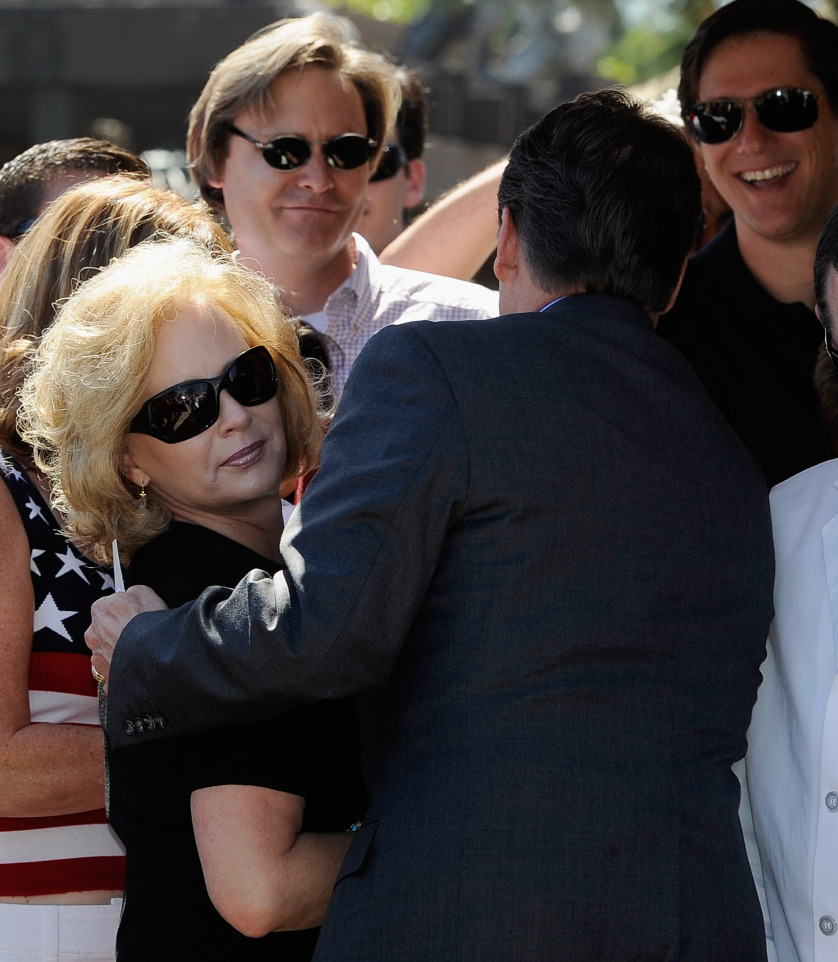 Anita Perry is increasingly stepping out from behind her husband, Republican presidential candidate and Texas Gov. Rick Perry. Wednesday she'll campaign solo in Iowa. Here they greeted supporters together during a rally on Sept. 8 in Newport Beach, Calif.

When Texas Gov. Rick Perry announced plans to run for president, he made a point of noting that it was his wife, Anita, who urged him to go for it, to get out of his "comfort zone."

Step into the fray, she urged.

That fray in recent days has taken a toll on Perry, who had a roundly-panned performance at GOP presidential debate last week followed by a surprising drubbing in Saturday's Florida Republican presidential straw poll.

Perry, who still leads in national GOP presidential preference polls, is regrouping. And on Tuesday he dispatched his wife of nearly 30 years to Iowa, to shore up support and raise money in the state where the presidential primary-and-caucus season will kick off early next year. Tuesday night spoke at a Polk County Republican event in Clive and, on Wednesday, she's scheduled to drop by the storied Iowa Machine Shed Restaurant in Urbandale and tour the Mercy Medical Center in Des Moines.

A former nurse who met her future husband while both were youngsters in nearby West Texas towns, Anita Perry, 59, has been described as a stabilizing force in his life. She's been compared to Laura Bush, her predecessor as the Lone Star State's first lady and the future first lady of the United States.

The mother of two grown children described her priorities, on the eve of her husband assuming the governorship in 2000, as "healthy, happy children, and a healthy, happy husband."

Last fall, during her husband's run for a third term as governor, Anita Perry told the Dallas Morning News that she views herself not as someone who can change the political game, but as someone who is game for the travails of the campaign trail.

"Not that I'm a vote-changer or a vote-getter or anything like that," she told the newspaper. "But I'll do whatever I need to do because I think it's important that he get re-elected."

As Anita Thigpen Perry increasingly hits the trail for her husband (she gave a speech recently in Florida defending his controversial criticism of Social Security as a "Ponzi scheme"), we offer up five things to know about the Texas first lady:

1. Anita Thigpen was 14, a high school freshman from Haskell, Tx., and daughter of the local doctor, when she went on her first sort-of date with Perry, then a 16-year-old high school junior in Paint Creek. He invited her to a football game he was sitting out because of a broken arm. But when Perry's coach ordered him to remain with the team, Anita's "date" turned into a car ride and game viewing with Perry's parents and sister. It would be 16 years later when the relationship, described in an Austin American-Statesman story as an "on-again, off-again courtship," led to marriage in 1982. (You can see Perry talk about her background with former Texas Monthly editor Evan Smith here.)

2. Before marriage, she earned a bachelor's degree from West Texas State University, now West Texas A&M University, and a master's degree from the University of Texas Health Science Center in San Antonio. She worked in the nursing field for 17 years before moving to Austin when Perry was elected state agriculture commissioner. "The years I spent as a nurse were among the most challenging and rewarding of my life," she said in 2008, when the nursing school at Texas Tech University was named after her.

3. In the 1990s, while the Perry children — son, Griffin, born in 1983, and daughter, Sydney, born in 1986 — attended public schools, Anita Perry worked for influential political consultant and lobbyist Bill Miller, and for economist Ray Perryman. Though registered as a lobbyist when working for Miller, Perry has said she did not lobby legislators or others. As first lady, she founded the Texas Conference for Women, which holds an annual gathering featuring dozens of successful women in fields including business, health, politics, and entertainment. She has also worked to raise awareness of nursing shortages.

She currently works for the non-profit Texas Association Against Sexual Assault, for which she is paid $60,000 annually. Critics have noted that almost all of the group's major donors have ties to the governor or state business, as detailed in a recent story in the Austin American-Statesman newspaper.

4. She is almost universally described as straightforward and in possession of a good sense of humor. A 2010 Dallas Morning News story portrayed her as a "small-town West Texas girl who sees her life with a pragmatic eye and a deadpan humor." She told the paper that when her husband's ego gets inflated, she'll say, "Who told you that you were cute today?"

5. The first lady of Texas, not surprisingly, has said she likes football. And basketball. And her tastes are in keeping with her stated preference for keeping things "normal." She told the Houston newspaper last year that she prefers iced tea or Diet Dr. Pepper over wine or beer, and takes guilty pleasure in cream cheese frosting, Caramello chocolate and People magazine.

Update at 9:06 a.m. ET. Was Anita Perry also the hidden influence behind her husband's controversial decision to mandate the HPV vaccine for Texas teens? The New York Times speculates that the former nurse may have played a key role:

The Perry campaign would not say what role, if any, Mrs. Perry, 59, played in her husband's actions regarding the vaccine, but her passions on the issue of combating HPV are known. In a keynote address given at a women's health summit meeting two years before Mr. Perry's executive order, Mrs. Perry specifically focused her comments on HPV.

Politico has also reported that Anita Perry surfaced in emails related to the issue, which it obtained through the Freedom of Information Act.