Accessibility links
Conservatives Blast, Liberals Cheer Millionaire Surtax : It's All Politics From the Democratic perspective, the beauty of such a surtax comes from how voters across the ideological spectrum have expressed approval for higher taxes on the wealthy to reduce federal deficits and for job creation. Not surprisingly, Democratic voters show the strongest support but there's significant support among Republicans, too.

Millionaire Surtax A 'Desperate' Act To Conservatives, 'Sensible' To Liberals

Millionaire Surtax A 'Desperate' Act To Conservatives, 'Sensible' To Liberals 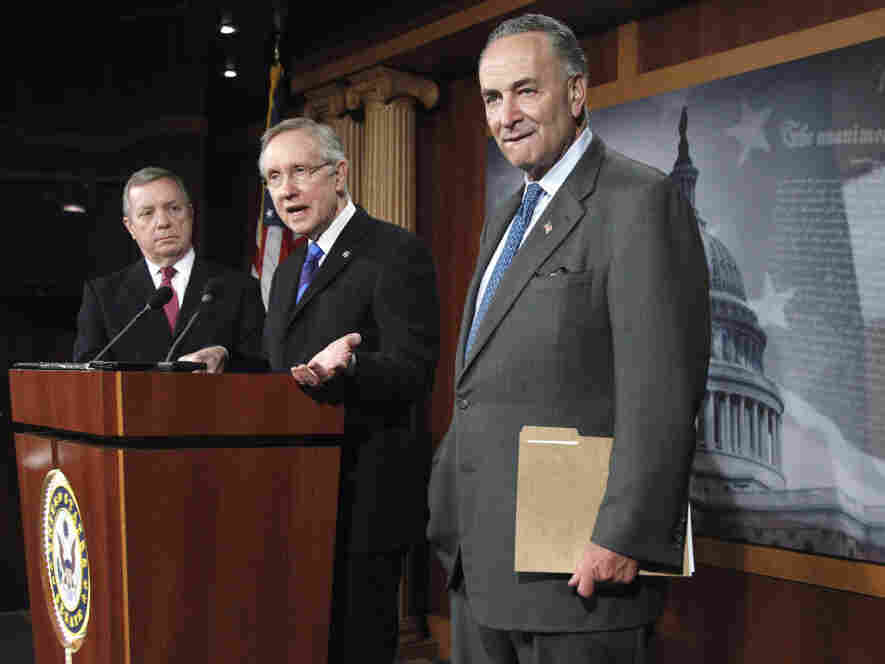 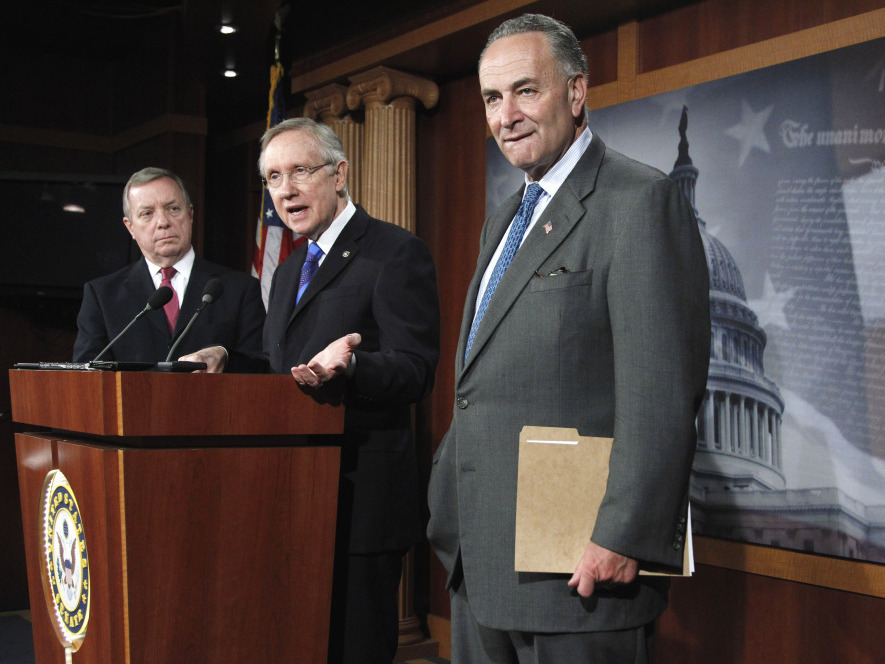 The disagreement in their ranks arises partly from how the president proposes to pay for his plan, an approach seen by some senators as potentially making their already difficult path to re-election even more so.

The president envisions increasing taxes on couples who, after deductions, have at least $250,000 in taxable income.

But that number seemed much too low to some Democrats worried about incurring the wrath of urban and suburban voters at the top end of the middle class.

So Senate Democratic leaders unveiled their own proposal Wednesday to pay for the stimulus measure, a five percent surtax on those with post-deduction taxable incomes of at least $1 million. Sen Harry Reid, the Senate majority leader, and his leadership team forecast the surtax would collect $445 billion in revenue.

From the Democratic perspective, the beauty of such a surtax comes from how voters across the ideological spectrum have expressed approval for higher taxes on the wealthy to reduce federal deficits and for job creation. Not surprisingly, Democratic voters show the strongest support but there's significant support among Republicans, too.

Reid alluded to this when he talked with reporters Wednesday about the proposed surtax:

And it's interesting to note that independents, Democrats and
Republicans and even the tea party agree it's time for millionaires
and billionaires to pay their fair share of taxes. More than 50
percent of the Tea Party and about 75 percent of other people in
America agree that we need to do something about this.

What Reid didn't say is that a Senate vote on his proposal would also force some Republicans into a potentially unpopular vote against higher taxes on the superwealthy, handing Democrats campaign issue.

Congressional Republicans were quick to dismiss the surtax idea.

"Republicans have identified areas of common ground where we can work with the President and Democrats to create a better environment for job creation," Steel said in a statement. "That should be our focus, not desperate tax hike gimmicks floated to cover up divisions within the Democratic caucus."

The offices of Senate minority leader, Sen. Mitch McConnell of Kentucky and House Majority Leader Eric Cantor of Virginia, issued a page with numerous quotes from Democrats over the past two years in which they either argued against higher taxes generally or a surtax in particular.

Over at The Enterprise blog of the conservative American Enterprise Institute, James Pethokoukis made sure to get the obligatory mention of "class warfare" into his negative review of the surtax idea.

Senate Majority Leader Harry Reid would prefer to mostly pay for President Obama's jobs package via a 5 percent surtax on millionaires rather than by trimming deductions for high-income taxpayers. This has at least a few political advantages for Democrats. First, it makes for an easily understandable talking point. Second, it has a better class-warfare angle since it would probably apply to just those taxpayers with incomes of $1 million or more, a mere 0.3 percent of the population. Obama's plan would hit households with incomes of $250,000 or more. Third, liberal activists will love it. A similar surtax was included, for instance, in the budget put out earlier this year by theCongressional Progressive Caucus.

But the economics are horrible. It would sharply increase marginal tax rates on high-income folks, giving them another reason to search out tax shelters. So it is unlikely the tax would raise anywhere near what Democrats expect. And how, again, would this create jobs, other than for tax attorneys? Higher marginal tax rates reduce incentives to work, save, and invest.

But the liberal Center for American Progress understandably took an opposing view to AEI's. It issued the following statement from its economic experts Michael Ettlinger, Michael Linden and Seth Hanlon:

The Center for American Progress has long advocated for the idea of imposing higher taxes on millionaires who make up less than 1 percent of taxpayers. As a percentage of their incomes, millionaires are now paying about one-quarter less of their income to federal taxes than they did in the mid-1990s. Millionaires paid an average tax rate of 22.4 percent in 2009, down by a quarter since 1995, when they paid an average of 30.4 percent. Asking these wealthy individuals to contribute their fair share is a sensible solution to fund the American Jobs Act and put millions of Americans back to work.