Accessibility links
Obama Hearts North Carolina But It May Have Lost That Loving Feeling : It's All Politics The question for Obama as he resumes his bus tour through political battleground states like North Carolina and Virginia to ostensibly promote his seemingly dead jobs plan, is will Asheville specifically, and North Carolina, generally, love him back as was the case in 2008? 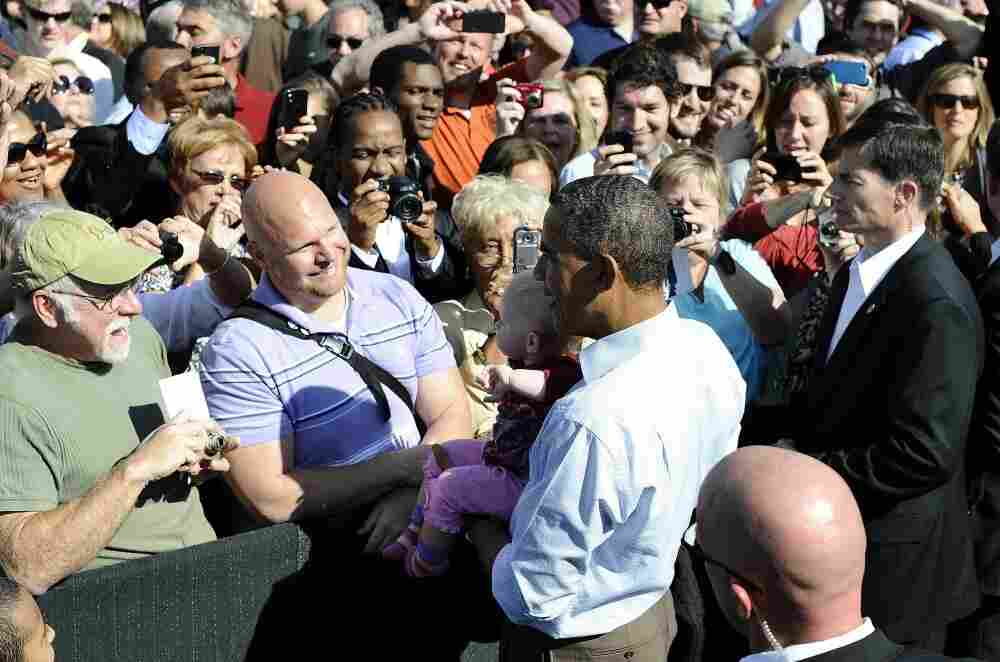 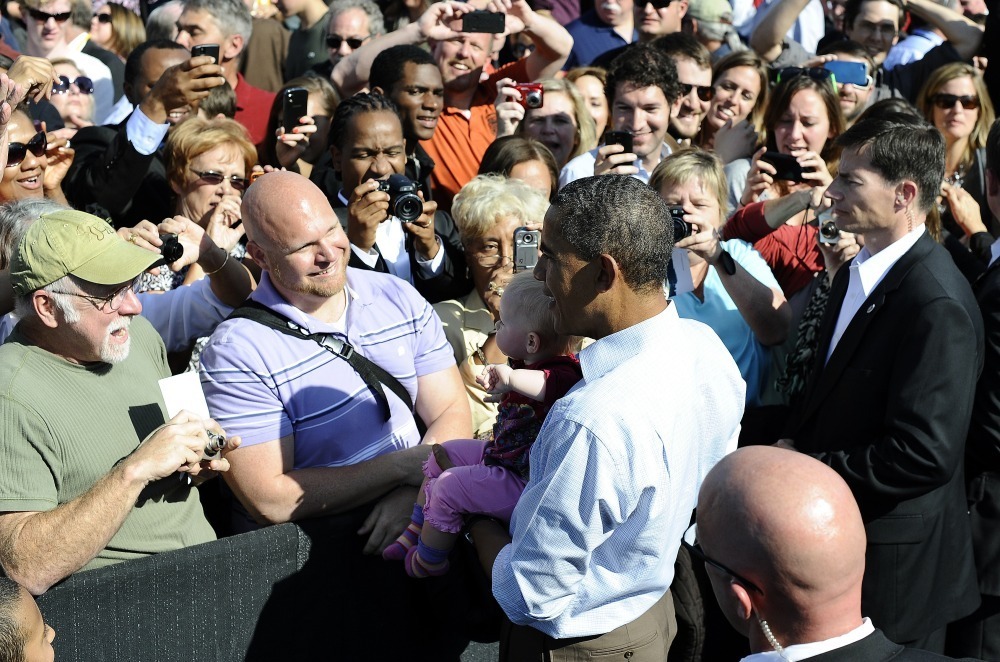 During the opening stop of his tour through North Carolina Monday, President Obama began a speech with how much he loves the state, especially the Asheville area.

And for the president, what wasn't there to love? In 2008 he won Buncombe County where Asheville resides, with 57 percent of the vote compared with Sen. John McCain's 43 percent.

I — I love Asheville. (Cheers.) It — in fact, I think I should be on the tourism promotion bureau of Asheville.

The question for Obama as he resumes his bus tour through political battleground states like North Carolina and Virginia to ostensibly promote his seemingly dead jobs plan, is will Asheville specifically, and North Carolina, generally, love him back as was the case in 2008?

That Obama carried two southern states in 2008 that had been reliably Republican for decades in presidential elections, enhanced the sweetness of his historic victory for his supporters.

The Tar Heel State's importance to Obama can hardly be overstated. Indeed, the president all but underscored the key role he sees it playing by placing next year's Democratic National Convention in Charlotte.

Obama campaign officials hope that the state's demographic shifts will make the difference. More higher educated and suburban transplants have moved into the state in recent years because of its large financial services industry. Meanwhile, the Hispanic population more than doubled since 2000.

But there's a very large countervailing force as well. While Gov. Bev Perdue who won election the same day as Obama is a Democrat, Republicans won full control of its legislature in 2010, the first time since Reconstruction.

It was testament to the big money and determination behind conservatives' growing political power in the state.

That was the message in a recent and widely read New Yorker piece by Jane Mayer who profiled Art Pope, the wealthy scion of the privately owned Variety Wholesales retailing company. He has been a major benefactor for conservative candidacies and issues in North Carolina.

Mayer's piece is important reading, providing, as it does, an insight into at least one of the people who will be able to claim credit if Obama loses North Carolina and perhaps the presidency next year.

The article also conveys how for Pope, it's not just about the state legislature or even the White House. It's also about North Carolina's educational system on which he is trying to imprint with his version of conservatism.

It's a version he and conservatives refer to as "classical liberalism" linked to 17th and 18th century thinkers John Locke and Adam Smith and it trumpets limited government and free markets. It's decidedly not the liberalism of Franklin Delano Roosevelt.

Pope's big political spending which has been funneled through independent groups to pay for some caustic political ads and other operations have left not only Democrats but even some moderate Republicans as electoral road kill, barely knowing what hit them.

According to Mayer, Pope is clearly looking forward to thwarting Obama's goal of a 2008 repeat in the Tar Heel State.

Pope is widely expected to pour more money into North Carolina for the 2012 elections. Carter Wrenn, the longtime Republican campaign adviser, says, "I'd guess Art will be a player. I'd be amazed if he decided to just drop it and go to the beach." Gary Pearce, a longtime Democratic consultant,* says of Pope, "I'd guess the governorship will be his next move. He'll try to elect a Republican governor. That's the only thing he doesn't have now." (Former Democratic consultant Mac) McCorkle, speaking of next year's elections, expresses worry: "The Democrats have become flabby and undisciplined. On our side, we really don't have anyone like Art Pope. It's a real problem." Whatever Pope's next move, Nina Szlosberg-Landis, the Democratic activist, predicts, "we're just seeing the beginning of it all. Corporate money is taking over. People are going to wake up in a whole new state, and maybe a whole new country."

Nothing would please Pope more. When asked about 2012, he said, "Yes, I'm going to support my side. I really do believe in the marketplace of ideas. I really do believe that my philosophies and theories that I support, classical liberalism, will prevail over arguments for socialism and the growth of government." He added that if his opponents disagreed they could fund their own side: "I welcome the competition."

Obama isn't only up against a very shrewd opponent in Pope. The president is also facing palpable disenchantment and apathy among the kind of people who excitedly worked for his victory in 2008.

That came through strongly in a Morning Edition report by Julie Rose of NPR member station WFAE-FM in Charlotte.

Students nowadays have other things on their mind.

GARLINGTON: "A lot of people saying they're not voting at all."

GARLINGTON: I guess they're afraid that Obama didn't follow what he said he was going to do. I guess that bothers a lot of people because they put their faith in him and I guess they feel let down.

JULIE: So are you going to campaign for him?

That is the sort of response likely to add gray hairs to Obama's already graying head.