Accessibility links
Perry Shakes Up Campaign Leadership : It's All Politics Texas Gov. Rick Perry's struggling campaign turns to tried-and-true Republican operatives to shore up its efforts as weeks tick down to primary season. One is a veteran of disaster management.

Perry Shakes Up Campaign Leadership With Bush and Dole Operatives

Perry Shakes Up Campaign Leadership With Bush and Dole Operatives 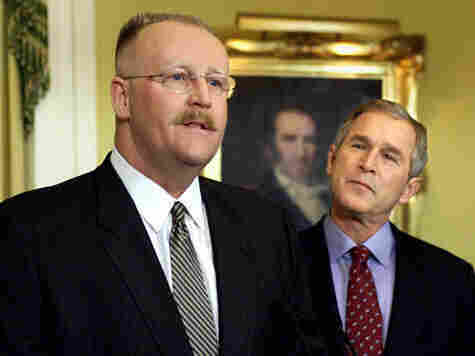 Joe Allbaugh, left, speaks to the press in Austin, Texas, in this Jan. 4, 2001, photo after being named as director of the Federal Emergency Management Agency by then President-elect George W. Bush.

Allbaugh will be joined on the campaign by top GOP pollster Tony Fabrizio, a former strategist for Bob Dole; Curt Anderson, an established GOP media strategist; and Nelson Warfield, who was spokesman for Dole's 1996 presidential campaign.

Allbaugh's new role, first reported by Texas Monthly writer Paul Burka, is seen by Perry watchers as a declaration of change in a campaign that has looked not ready for prime time since the Texas governor's much-anticipated entrance into the GOP presidential race in August.

Perry led national presidential preference polls before he got into the race, but his popularity nosedived after his stumbling performances in his first debates and conservative disquiet over some health and immigration policies he endorsed as governor.

The shakeup raises questions about the nature of the road ahead for Perry's chief strategist, David Carney. The New Hampshire-based operative has guided Perry's Texas electoral victories — including three gubernatorial races. The Texas Tribune reports that Carney will remain a consultant to the campaign.

Burka, of the Texas Monthly, also reported Monday that Perry's wife, Anita, was the "driving force" behind the reorganization.

Burka has tracked Perry's career for decades. In August, he characterized Allbaugh as "one of the few Bushies who supports Perry" and says there was "never much love lost" between Allbaugh and former Bush strategist Karl Rove, who has been in a long-running feud with Perry.

In recent weeks, Perry and Rove have traded barbs. Rove has criticized Perry for calling Social Security a "Ponzi scheme," and for not outright dismissing, during an interview with Parade magazine, the notion that President Obama was born somewhere other than in the U.S.. Perry, during a GOP presidential debate in early September, brushed off Rove's criticism this way: "I'm not responsible for Karl anymore."

The changes come as the Perry campaign is poised to unleash an ad campaign in Iowa, the site of the first presidential season contest Jan. 3; and as Perry begins selling an economic plan that is expected to include a flat federal income tax rate of 16 to 20 percent.

Perry plans to release the proposal Tuesday. Politico reported Monday that Perry's Iowa ads will run statewide all this week.

Allbaugh managed George W. Bush's campaign for governor, and was campaign manager for the 2000 Bush-Cheney presidential campaign. He was considered part of the "Iron Triangle" around Bush that included aides Rove and Karen Hughes.

Allbaugh now heads Allbaugh International Group, a private disaster management firm that describes itself as specializing in "disaster preparedness, response and recovery," and lists its clients as including "governments, defense, national and governmental entities, private corporations and universities."

Allbaugh also served for two years as FEMA director under Bush before leaving for the private sector. And he was a senior adviser to Rudy Giuliani's unsuccessful presidential campaign in 2007.