Accessibility links
No Interview Planned, Gloria Cain Continues To Shun Spotlight : It's All Politics Although Herman Cain said earlier this week that America would soon "meet my wife publicly in an exclusive interview," no television appearances have been scheduled for Gloria Cain, who has been largely absent from the campaign trail. 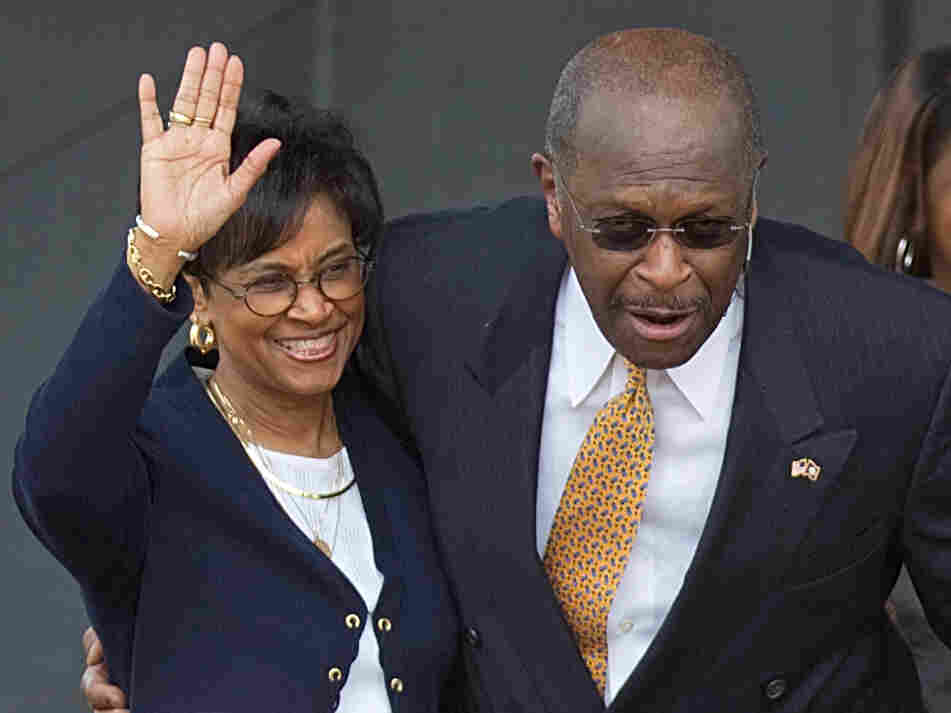 Gloria Cain, left, accompanies her husband Herman Cain as he announces his run as a Republican candidate for president in Atlanta on May 21. David Goldman/AP hide caption 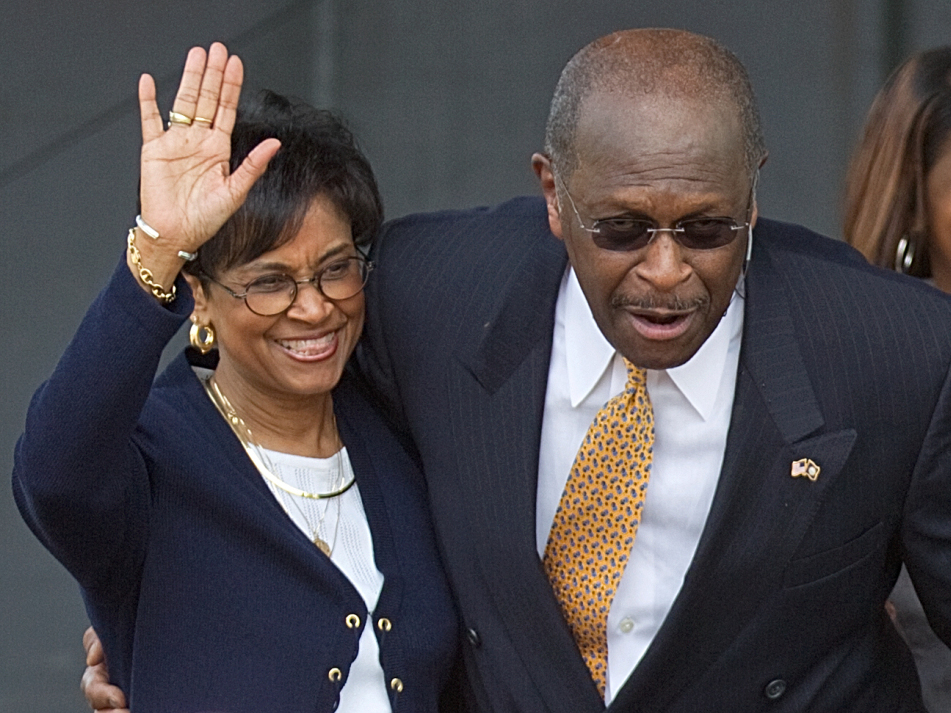 Gloria Cain, left, accompanies her husband Herman Cain as he announces his run as a Republican candidate for president in Atlanta on May 21.

Yet another woman seemed ready to break her silence about Herman Cain on Friday, but it was not to be.

The emergence this week of sexual harassment accusations made against Herman Cain has intensified curiosity about Gloria Cain, the candidate's wife of 43 years. Cain himself helped pique the interest earlier this week when he said America would soon "meet my wife publicly in an exclusive interview that we are currently planning."

And the New York Times, Politico and CNN reported that Gloria Cain would possibly appear on Fox News' "On the Record with Greta Van Susteren" on Friday. But the Fox News program has said it had not scheduled an interview with Gloria Cain.

Any interview could force Gloria Cain to address the allegations against her husband, placing her squarely under the hot lights that she's avoided for years. So far, Cain doesn't seem need her to come to his defense: A Washington Post/ABC News poll, taken after news the accusations broke, shows Cain statistically tied with Mitt Romney for the lead in the race for the Republican presidential nomination.

High-profile spouses have become the norm in politics, but Gloria Cain, 65, has been largely absent from the campaign trail — and it's just the way she prefers it, according to family friends and the Cain campaign. In his memoir, Cain described his wife's reaction to his desire to run for the presidency as less than enthusiastic.

"Gloria didn't immediately jump up and down and cheer," Cain writes. "In fact she was terrified! Scared to death!" he wrote. "That was because of the widely held perception of what it's like to be in politics — of what it can do to your family and to you, the candidate."

By many accounts, Gloria Cain is the yin to Herman Cain's yang, declining the limelight about as much as her gregarious husband seeks it.

"She's absolutely delightful. Very private, but a very gracious lady," says Valerie Ferguson, an executive at Loews Hotel in Atlanta, where the Cains live in a suburb. "He has a wonderful family. ...These are really, really great people. ...I say that as a Democrat."

Cain also writes in his book that the couple met while in college. They wed just after Gloria Cain, who was a year behind her husband at a neighboring school, graduated. The Cains have two adult children and three grandchildren.

The Daily Caller reported that Gloria Cain is a former schoolteacher, an active member at her church in Atlanta and most comfortable tending to the family. She cooks Sunday dinner for the entire family that Cain rarely misses, even during the campaign.

Gloria Cain hasn't been shy about exerting her political independence from her husband, according to the Atlanta Journal-Constitution. The newspaper reports that while Cain has consistently voted for Republican candidates, his wife often has for Democrats—including for Barack Obama in 2008. In 2004, the paper notes, she did vote for a Republican—her husband, who ran for the Senate that year.