Accessibility links
Perry Says He 'Stepped In It' At Debate : It's All Politics His performance at Wednesday night's GOP presidential debate might be the stuff of history — the kind of history that candidates don't like to make. Thursday, he admitted he had "stepped in it" for being unable to remember he wants to eliminate the Department of Energy.

Perry Says He 'Stepped In It' At Debate, And Many Agree

Perry Says He 'Stepped In It' At Debate, And Many Agree 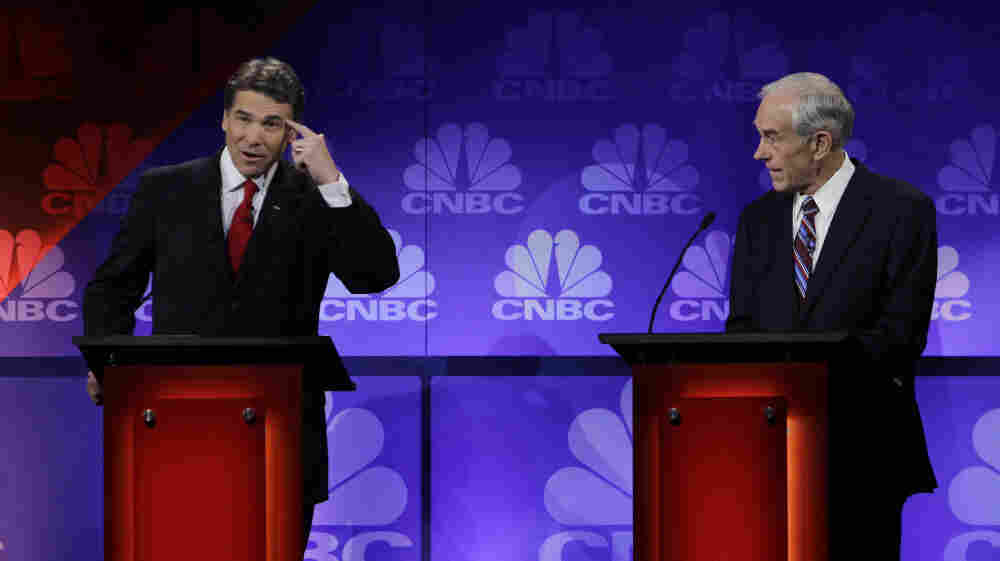 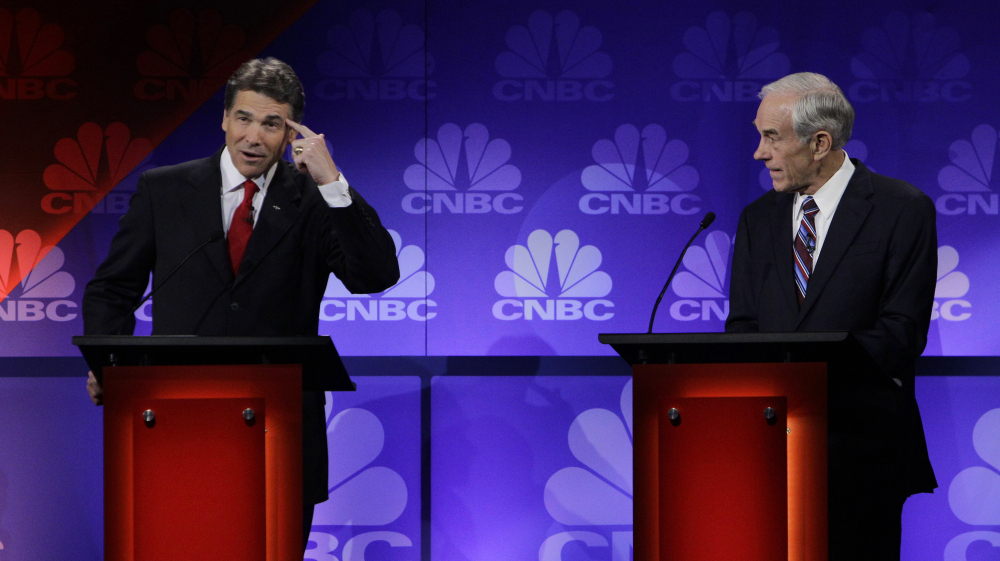 Texas Gov. Rick Perry was doing his best Thursday to limit the damage after he drew a blank at Wednesday's GOP candidate debate on his own plan to reduce the size of government.

Discussing the proposal, Perry said he would eliminate three federal agencies, but then could not name them all, despite being pressed by the moderator.

"Commerce, Education and the — what's the third one there? Let's see," the Texas governor said. Rival candidate Ron Paul suggested it might be the Environmental Protection Agency. "EPA, there you go," Perry responded — incorrectly.

"Seriously?" moderator John Harwood, one of the CNBC debate hosts, asked. "You can't name the third one?"

"The third agency of government I would do away with — the Education, the Commerce. And let's see. I can't. The third one, I can't," Perry said. "Oops."

Perry, who had been trying to think of the Department of Energy, acknowledged Thursday on CBS' "The Early Show" that with his lapse, he'd "stepped in it." But he has dismissed suggestions that it's the end of the road for his presidential hopes.

"Oh, shoot no," he told The Associated Press. "This ain't a day for quitting nothing."

"Off screen, Dr. Paul is sadly administering the last rites to Rick Perry," Republican strategist Mike Murphy said after the debate. "Dr. Paul filling out paperwork as they haul Perry away. He's ruling it a suicide."

"Rick Perry just lost the debate. And the entire election. You only had to name three," Tim Albrecht, the top spokesman for Iowa Gov. Terry Branstad, who is unaligned in the GOP race, tweeted from his personal account.

On Thursday, Perry said he just couldn't think of the third agency.

"There were so many federal agencies that come to mind, that I want to get rid of, that the Energy Department would not come out," he said in an interview taped for ABC's Good Morning America.

In an appearance on the Fox News Channel, Perry said, "If anybody's looking for the slickest politician or the smoothest debater, I readily admit I'm not that person. But what Americans do know is that my committed conservative values has helped lead one of the most influential states in this nation for the last 10 years."

Allan Louden, an expert on presidential debates at Wake Forest University in Winston-Salem, NC, says that gaffes really matter when they fit the pre-existing narrative of the candidate.

Perry has been dogged in recent weeks by suggestions that he had been drinking or taking drugs when he gave an animated speech in New Hampshire. It went viral online, prompting the candidate to issue denials.

In Perry's case, he was already seen as "not exactly on top of his game" when it comes to debate, Louden told NPR.

"This feeds the story line," he says. "It's really a question of context."

Meanwhile, his rivals seem to offer a bit of sympathy.

"We all felt very bad for him," Michele Bachmann, the Minnesota congresswoman also running for the nomination, said after the debate, calling the moment uncomfortable.

Perry has committed to four more debates this year, but his advisers are said to be considering skipping some or all of them.

Susan Drucker, a professor of journalism, media studies and public relations at Hofstra University, tells NPR, "The way voters use the debates is related to how we watch live television. Sometimes we watch the live performance just for the gaffe, the 'oops' moment."

"Therefore, this type of mistake becomes the moment of the pre-general election debate cycle."