Accessibility links
Herman Cain Has Major 'Oops' Moment On Libya : It's All Politics Texas Gov. Rick Perry move over. You now have company in the brain-fade department after Herman Cain demonstrated a flamboyant confusion over his position on Libya Monday. 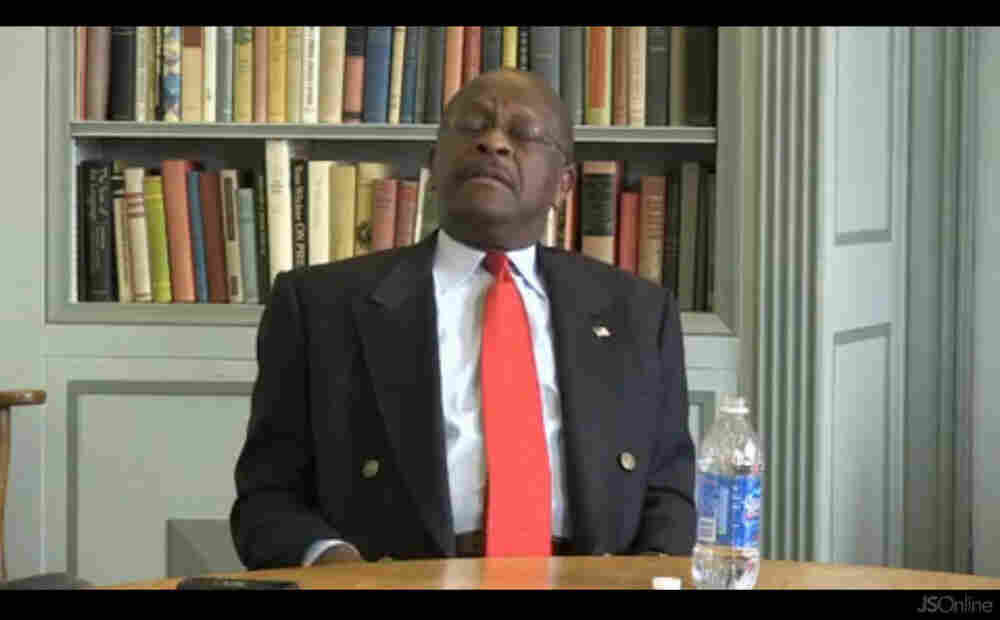 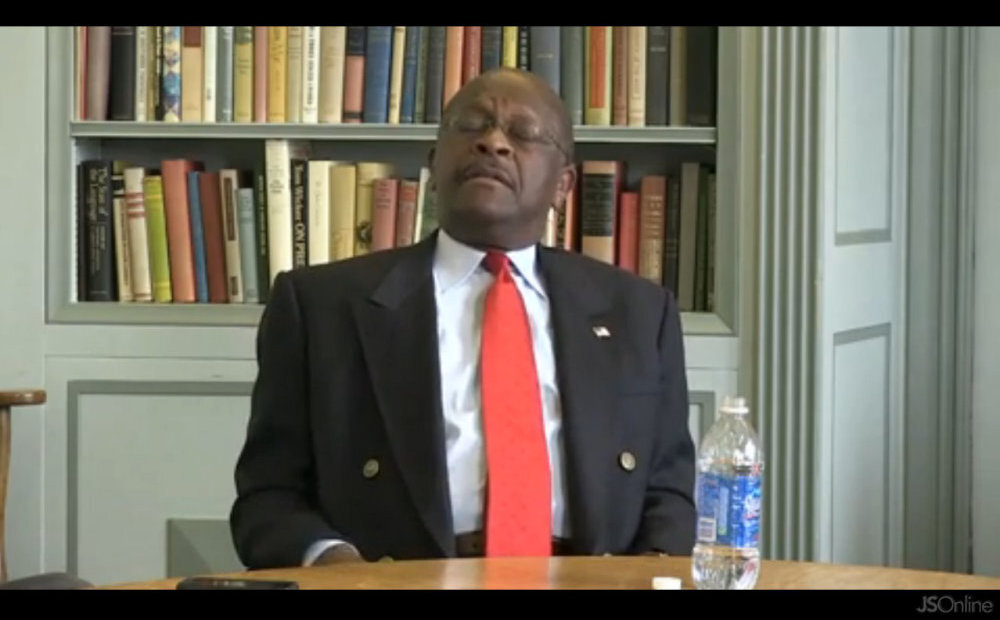 Texas Gov. Rick Perry move over. You now have company in the brain-fade department after Herman Cain demonstrated a flamboyant confusion over his position on Libya Monday.

In a meeting with Milwaukee Journal Sentinel staff members, a journalist asked the Republican presidential candidate a question that wasn't exactly one of those "gotcha" queries. Paraphrasing, the question was: Do you agree or not with President Obama's Libya policy?

"OK, Libya," Cain said closing his eyes, then looking up, then leaning forward, a man clearly trying to summon up from somewhere in his brain that Libya stuff.

After several seconds, some facts seemed to come to him, sort of. But he didn't appear certain.

With the deliberateness of a skater testing the thickness of pond ice in early winter, he spoke slowly without any of the verve or certainty he would have had if the question had been about, say, his 9-9-9 plan.

CAIN: "President Obama --- supported the uprising, correct? President Obama called for the removal of Gadhaffi. I just want to make sure we're talking about the same thing before I say 'Yes, I agree' or 'No, I didn't agree.'

"I do not agree with the way he handled it for the following reasons. Umm. No that's a different one."

Oops. Maybe he was thinking about Ubekibekibekistanstan?

He then shifts his seat around and crosses his left leg over his right.

CAIN: "I've got to go back to see. I've got all this stuff twirling around in my head."

Then he has an idea. How about buying some more time by asking the journalist to clarify:

CAIN: "Specifically, what are you asking me did I disagree or not agree with Obama?"

The journalist restates and elaborates on the question, ending with "How would you have handled it?"

CAIN: "Here's what I would have done differently. I would have done a better job of determining who the opposition is. And I'm sure that our intelligence people had some of that information. Based upon who made up that opposition, might've caused me to make some different decisions about how we participate. Secondly, no I did not agree with Gadhaffi killing his citizens.

"Absolutely not. So something would have had to have been, I would have supported many of the things that they did in order to help stop that. It's not a simple yes-no because there are different pieces and I would have gone about assessing the situation differently which might have caused us to end up in the same place. But where I think more could have been done was what's the nature of the opposition."

Shortly after this, however, Cain badly contradicts himself. He has been criticizing Obama for not thoroughly assessing the situation but then acknowledges he has no idea what kind of assessment Obama and his national security team conducted.

The moment comes when a second journalist asks Cain if he would have backed away from U.S. involvement in Libya due to the uncertainties he cited about the Libyan opposition's composition or the way forward. Cain again says he couldn't give a yes-no answer because "all of those things should have been assessed."

To which the journalist asks: "You don't think they were assessed?"

CAIN: "I don't know that they were or were not assessed. I didn't see reports of that assessment."

It will be hard to spin this one though surely some Cain supporters will try.

"He didn't say anything wrong," says Gordon. He says it just took Cain a while to articulate his thoughts on President Obama's handling of Libya. By way of explanation, Gordon said Cain was tired from an exhausting campaign travel schedule (he got just four hours of sleep last night) and an expansive editorial board interview that covered a wide range of topics.

Gordon says he has briefed Cain on numerous countries recently, including Libya. So it's not that the candidate didn't know the answer, he simply had to gather his thoughts. Gordon says Cain thinks president Obama acted too quickly on Libya without properly assessing who was part of the opposition that would eventually come to power.