Accessibility links
Rick Perry Vows To 'Uproot' Washington In Bid To Kick-Start Campaign : It's All Politics Hoping to hit on a formula that could vault him back into the top tier of Republican presidential candidates, Texas Gov. Rick Perry on Tuesday proposed a radical makeover for all three branches of government. 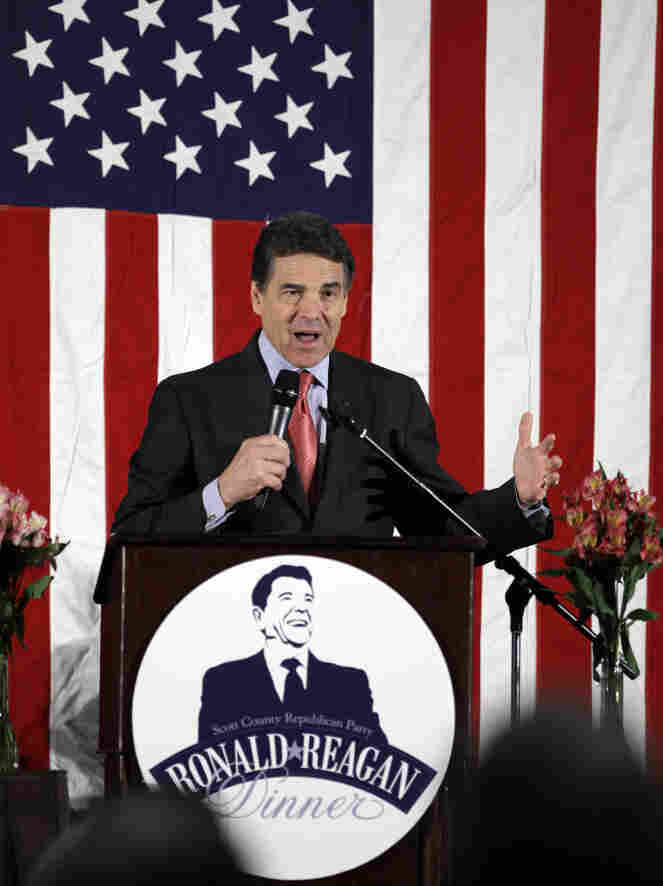 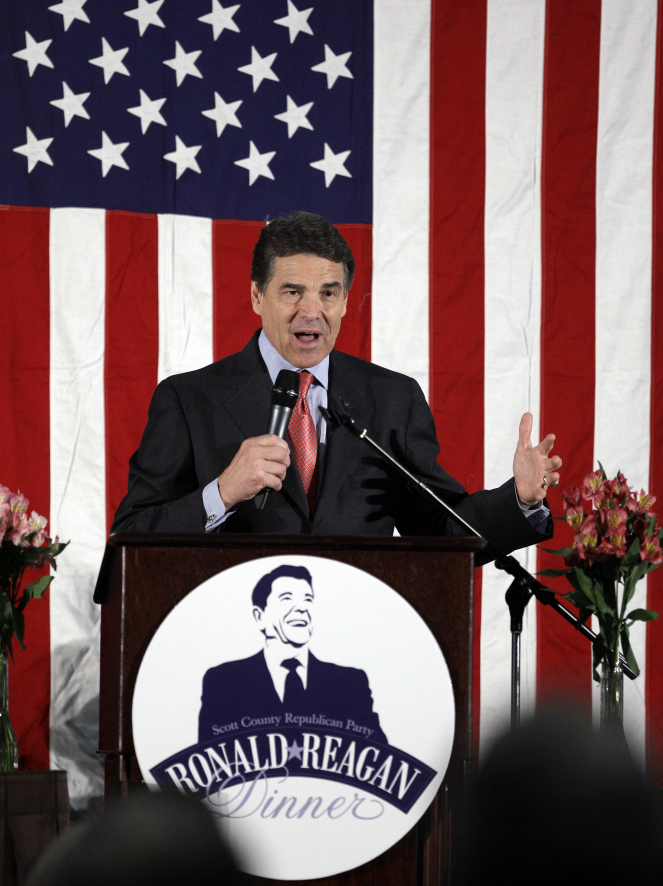 Hoping to hit on a formula that might vault him back into the top tier of Republican presidential candidates, Texas Gov. Rick Perry on Tuesday proposed a radical makeover for all three branches of government.

Among his ideas, Perry recommended turning Congress into a part-time legislature which would allow lawmakers to take other jobs and spend more time in their home districts.

He also proposed a constitutional amendment to end life-time appointments for federal judges as a way of reining in "activist" judges who don't "respect the Constitution" in his view.

In short, it sounded like Perry's vision for Washington was to have it follow the practices of many states where part-time lawmakers and term-limited judges are the norm.

In the prepared text of a speech in Iowa to outline his program of clean-up, Perry said:

I do not believe Washington needs a new coat of paint, it needs a complete overhaul. We need to uproot, tear down and rebuild Washington, D.C. and our federal institutions.

He made an additional proposal that had some of his critics sniffing hypocrisy. Perry recommended the criminalization and incarceration of members of Congress who profit by making financial trades on information obtained through their official work.

Perry was surfing off Sunday's "60 Minutes" report in which the CBS News program reported what it said were, at the very least, conflicts of interest that occurred when some U.S. lawmakers engaged in financial trades in the equities of companies or industries overseen by Congress.

That was too rich for some Perry critics. They noted that Perry himself gained a reputation in Texas for appearing to engage in pay-to-play politics. He was also accused of acting similarly to the lawmakers in the "60 Minutes" piece.

The American Bridge 21st Century PAC which supports Democrats, for instance, noted that Perry made a tidy profit in the 1990s from an investment he made in a political donor's company.

"If Perry thinks members of Congress belong in jail, what would he think about an elected official who purchased 2,800 shares of stock after speaking with that company's CEO on the same day a giant investment group purchased 2.2 million of its shares?"

Perry and the CEO of that company, James Leininger, have both denied any wrongdoing.

Besides the proposals to remake Congress and the U.S. judiciary, Perry also had a few proposals for the Executive Branch.

He had already said he would do away with the departments of Commerce, Education and that third federal agency whose name he infamously couldn't recall during a recent debate, Energy.

Perry's proposals were certainly sweeping. But even if he were elected, it's unlikely they would ever come to pass since it's hard to see Congress yielding power to the executive branch which it would most assuredly do if it spent even less time in Washington than it already does.

Also, experts on the workings of Congress, like Thomas Mann at the Brookings Institution and Norm Ornstein at the American Enterprise Institute, have repeatedly argued that Congress is so dysfunctional not because lawmakers spend too much time in Washington but too little. Perry's proposal would threaten to make a bad situation even worse.

What's more, making lawmakers part-timers would increase their difficulty to spend the time needed to grasp the complex issues. It also would seem to increase, not decrease, the potential for conflicts of interest. Would the nation truly be served better by having working bankers also serving on the House Committee on Financial Services?

Meanwhile, it's curious that a presidential candidate like Perry who prides himself on fidelity to the Constitution would want to do away with the life-time appointment of federal judges.

The Framers actually debated the issue of judicial life-time appointments and decided that life tenure for judges was the best way to achieve for the new republic's judiciary the greatest independence from Congress and the president and the least temptation to corruption.

So the question has to be, at least on this score, what does Perry know that the Framers didn't know?