Accessibility links
New Rules For Political Money Shape 2012 Race : It's All Politics The 2012 presidential campaign is already being shaped by new rules for political money. That means corporate involvement in presidential politics on a scale not seen since the Watergate scandal of the 1970s, which ended Richard Nixon's presidency. The key difference: This time, it's legal. 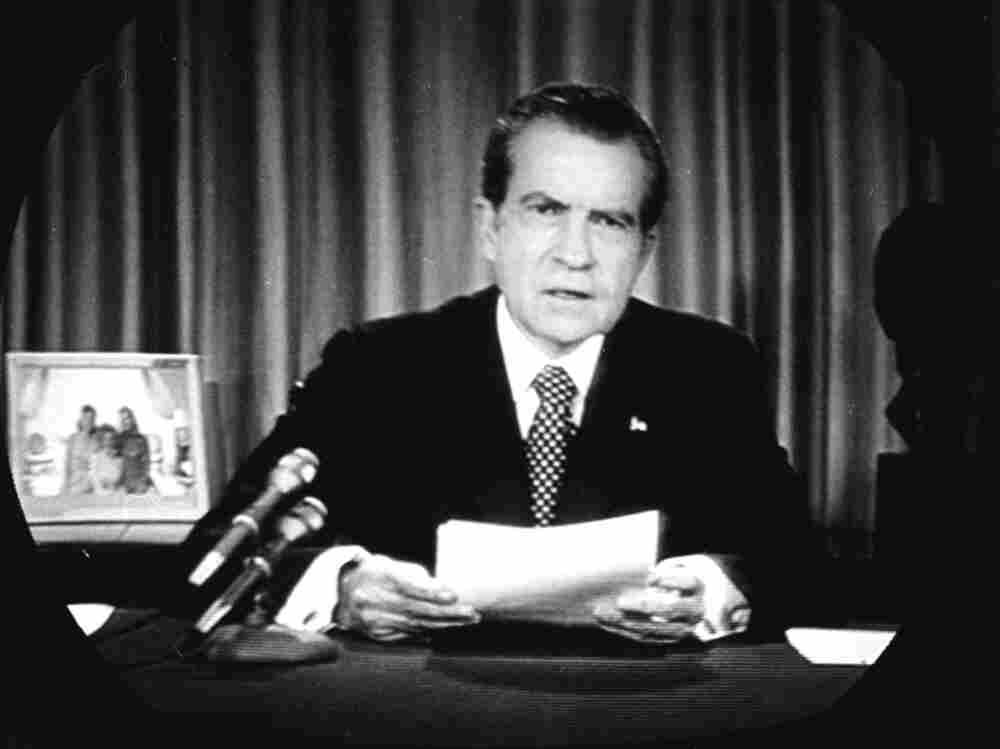 President Richard Nixon faced television cameras in the Oval Office on April 30, 1973 to announce the departure of his two closest assistants in the deepening Watergate scandal. CBS/AP hide caption 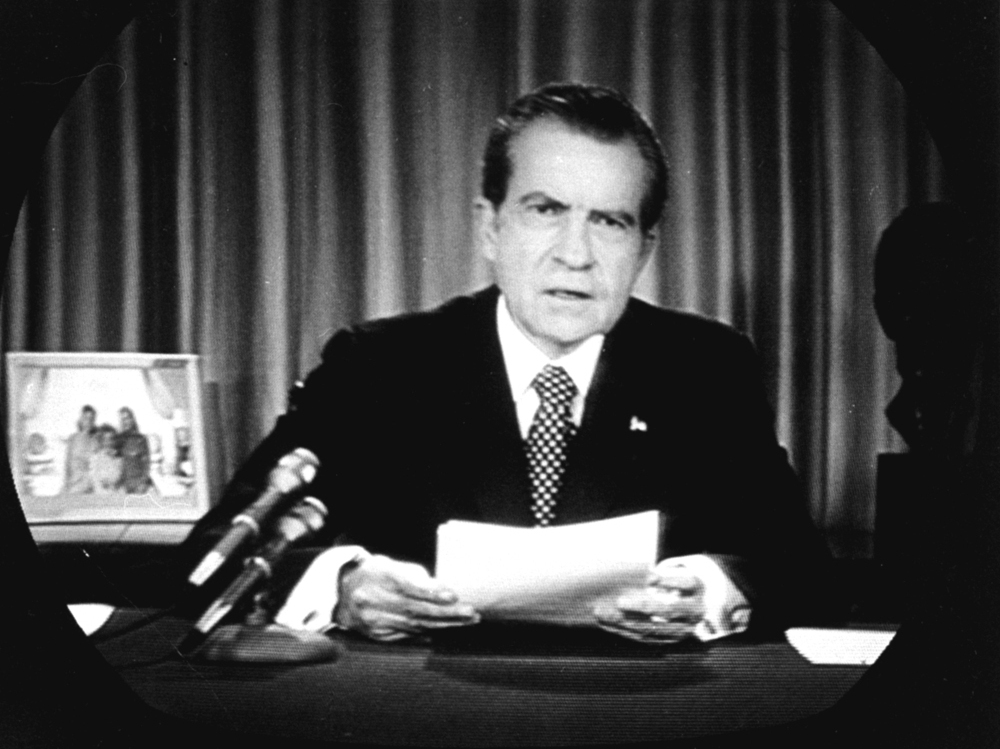 President Richard Nixon faced television cameras in the Oval Office on April 30, 1973 to announce the departure of his two closest assistants in the deepening Watergate scandal.

The 2012 presidential campaign is already being shaped by new rules for political money. The Supreme Court's Citizens United ruling allows corporations to jump into the presidential contest, as lower-court rulings and the Federal Election Commission provide new avenues through which corporate money can flow.

The likely result: Corporate involvement in presidential politics on a scale not seen since the Watergate scandal of the 1970s. The critical difference: This time, it's legal.

In 1971, before President Richard Nixon's re-election committee had sent its "plumbers" to break into Democratic national headquarters, and before Nixon's famous "I am not a crook" denial, the campaign committee was already embarked on an illegal fundraising operation. The campaign was soliciting money from corporations, and bartering presidential decisions to get the cash.

Then, as now, corporate contributions to candidates' campaign committees were illegal.

In one case, the Associated Milk Producers Incorporated, or AMPI, pledged $2 million to the campaign. In return, Nixon jacked up the federal subsidy for milk.

"It was a simple trade," says Richard Reeves, who covered the scandal as a reporter and later wrote about it in his book, Richard Nixon, Alone in the White House. "Nixon got $2 million for charging American consumers $100 million."

The deal was sealed on May 23, 1971. In the morning, Nixon met with AMPI leaders in the Cabinet Room. Then he left, as his aides nailed down the deal.

Nixon's secret taping system was recording later that afternoon, when he signed off on the trade in the Oval Office: more campaign cash for higher milk prices.

Reeves says the meeting broke up shortly after that. "Everybody stood up. And John Ehrlichman, the president's counsel, said, 'Well, we better get ourselves some milk before the price goes up. Let's get it while it's still cheap.'" There's laughter on the tape.

Reeves continues: "After the deal was worked out, at midnight, the Nixon people met with the milk producers. And that's where the money passed hands."

The head of AMPI and one of its lobbyists eventually went to prison. Overall, the Watergate prosecutor nailed 21 corporations for making illegal, secret contributions.

Now, 40 years later, AMPI has almost no presence in Washington. But if it did, the new rules of campaign finance provide a way to do what was illegal in 1971. AMPI would have to avoid a candidate's campaign committee. But it could give any amount it wanted to a presidential super PAC, a new creation in the 2012 elections.

There are super PACs for all of the major presidential contenders. One is Make Us Great Again, which is backing Texas Gov. Rick Perry. It's currently running ads in South Carolina announcing that Perry can deliver "conservative leadership that works." MUGA, as it's known, is not officially connected to Perry's presidential operation. But as an example of how thin the line is between official and de facto ties, MUGA's founders include Perry's former chief of staff.

"The contribution limits are pretty meaningless," says Meredith McGehee of the Campaign Legal Center, which supports stronger campaign finance laws. She says, "You can give the money you want to the candidate directly, and then you can give unlimited amounts to the super PAC."

As fundraising conduits, super PACs do have a flaw. They have to disclose corporate contributions. But the new rules have a way around that too. Donors can give to a so-called issue group that is connected to the super PAC.

The super PAC discloses its donors; the issue group does not, even while running what seem like campaign ads. A spot now on the air accuses Republicans of wanting "the largest cut to student grants in history." It adds, "But President Obama has a plan to help."

Several of the presidential candidates benefit from this arrangement. Former federal election commissioner Karl Sandstrom has a term for it: public anonymity and private disclosure.

"That means the public may be in the dark about who contributes. But the beneficiaries — the officeholders and the candidates — are aware of who contributes," he says.

Backer says Nixon would be at the kick-off reception, pitching a prospective donor, "and Nixon says, 'You need to support Nixon super PAC. We need your help.' And then a staffer from the super PAC comes up and says, 'So listen, you can cut a check in any amount. What would you like to give us? A million dollars?'"

Backer says the law is going in the right direction, treating corporations as people. "The law's the same for everybody," he says. "Doesn't matter who you are, what kind of speaker you are, what you believe in, the law's going to treat you the same as long as you're not engaging in corrupt behavior."

That's the hard part, of course, finding the corrupt behavior. Most politicians don't bug their own offices, the way Nixon did.