Accessibility links
GOP Candidates Seek Social Conservative Support In Iowa : It's All Politics Six GOP presidential candidates vying for the support of social conservatives took part in a wide-ranging forum that featured discussion over abortion, gay marriage and the role of religion in public life. But notably absent was former Massachusetts Gov. Mitt Romney, who declined the invitation. 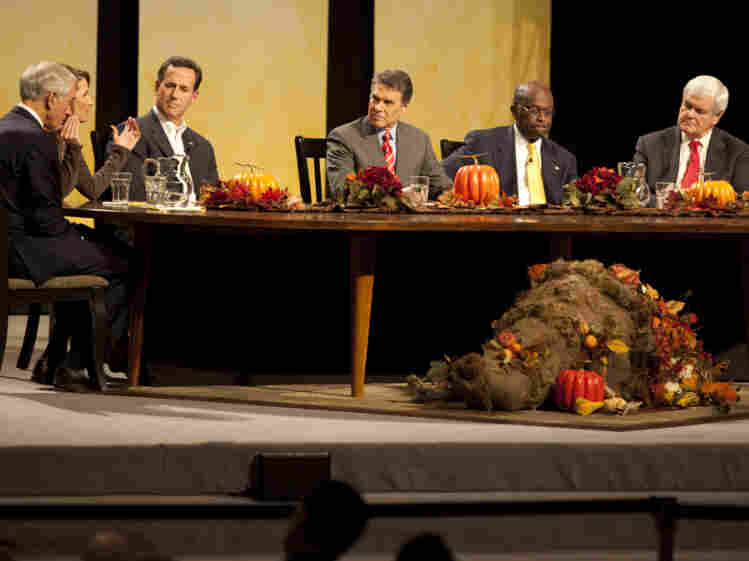 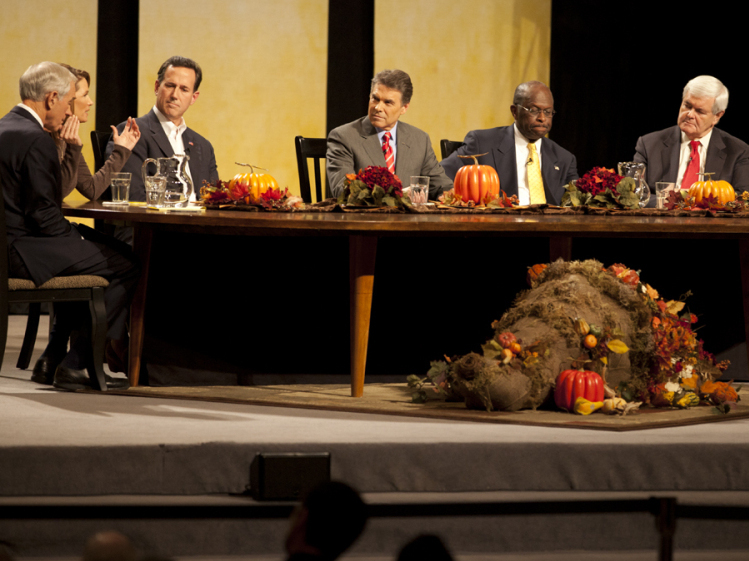 Republican presidential candidates at the "Thanksgiving Family Forum" in Des Moines on Nov. 19, 2011.

A Republican presidential nominating contest that has focused largely on the economy turned to social issues and personal narratives Saturday night, as six GOP hopefuls took part at a Thanksgiving Family Forum in Des Moines, Iowa. Notably absent was former Massachusetts Gov. Mitt Romney, who declined the invitation and is instead campaigning in New Hampshire.

"If only Mitt Romney were here to respond," said moderator Frank Luntz, after businessman Herman Cain brought up the federal health care overhaul, which has been compared to a Massachusetts' system that Romney oversaw as governor.

Seated shoulder-to-shoulder around a "Thanksgiving table," the candidates took part in a wide-ranging discussion about issues like abortion, gay marriage and the role of religion in public life. Candidates also revealed their softer sides — at least two of the candidates openly wept as they recalled the health and spiritual challenges in their lives.

"You have more that you agree on than the small things you disagree on," said Luntz. But that lack of disagreement at the evening forum left the evangelical voters in attendance unsettled on a clear favorite.

"It does make it tough," said Warren County Republican Chairman Rick Halverson. "These guys are vying for the votes of people like me ... They're gonna divide the not-Romney vote. Somebody's gotta break out of the pack."