Accessibility links
With His Past An Issue, Gingrich Spars And Parries : It's All Politics After seeking the blessing of Donald Trump, former GOP House Speaker Newt Gingrich warned Nancy Pelosi against dishing dirt from the old House ethics investigation against him.

As His Past Emerges As An Issue, Front-runner Gingrich Spars And Parries

As His Past Emerges As An Issue, Front-runner Gingrich Spars And Parries 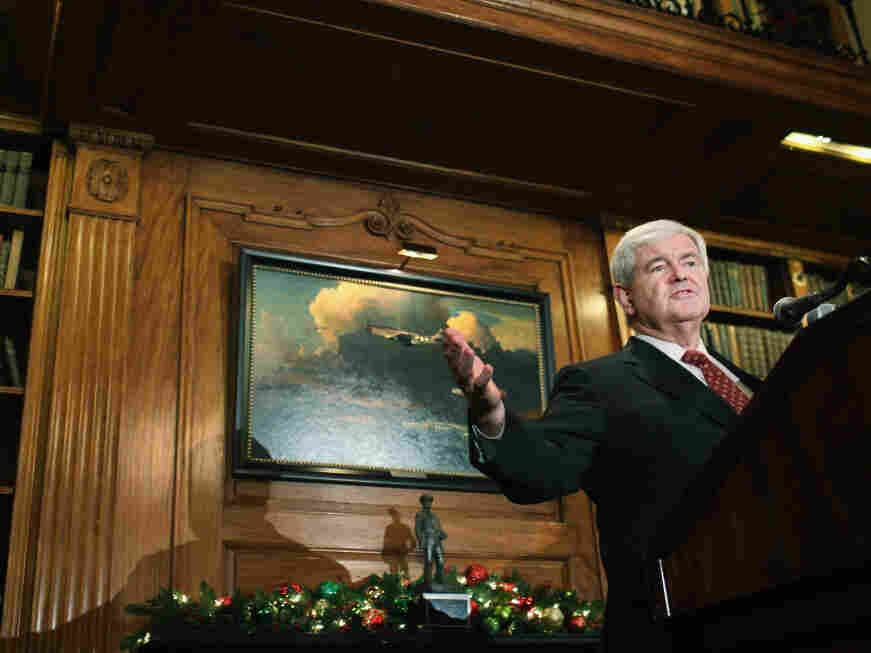 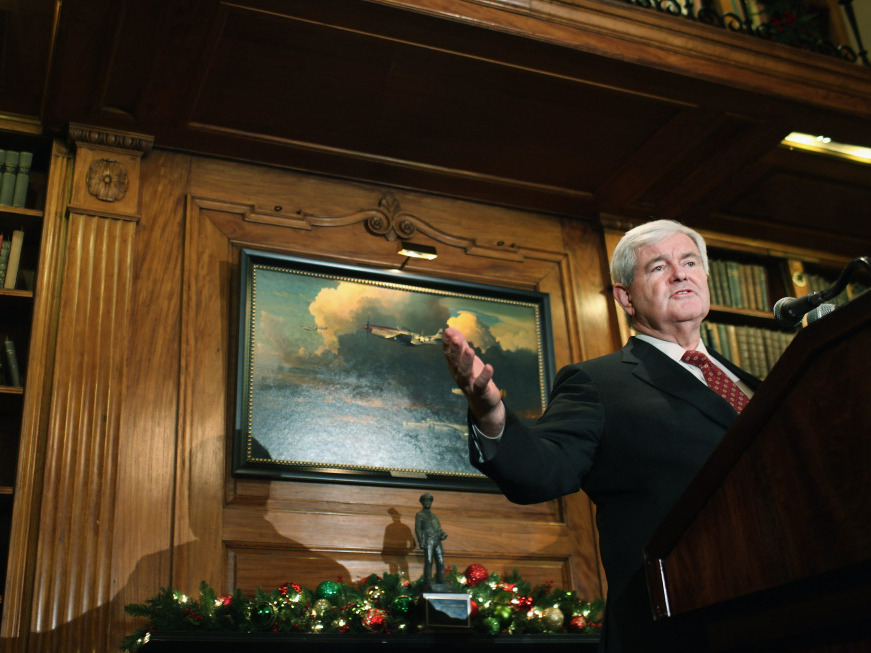 Republican presidential candidate Newt Gingrich speaks to the media at the Union League Club following an earlier meeting with Donald Trump at Trump Tower on Dec. 5 in New York City.

He was questioned at a New York City fundraiser about the "baggage" he brings to the race.

And he dared House Democratic Minority Leader Nancy Pelosi to make good on her hint that she may one day talk about information she knows about Gingrich from her time on the ethics panel that investigated him for cheating on his taxes and violating campaign finance rules when he was in Congress.

"I would like to thank Speaker Pelosi for what I regard as an early Christmas gift," Gingrich told assembled reporters after he emerged from a meeting with Trump.

He suggested that if Pelosi, who made her comment to a reporter for the liberal TPM.com, reveals details from the House ethics investigation it would be "a fundamental violation of the rules of the House."

"I would hope that members would immediately file charges against her the second she does it," he said.

Gingrich, hit with 84 ethics charges in the 1990s, was reprimanded by the House in 1997, and ordered to pay a $300,000 penalty. It marked the first time in the history of the institution that members disciplined a speaker for ethics violations.

Pelosi's comment, and Gingrich's forceful comeback, served up a stark view of the potholes the longtime politician-turned-Washington influence peddler (he resists the label "lobbyist") faces on his quest to win the GOP nomination.

In Iowa, however, where the first presidential nominating contest will be held Jan. 3, the Register poll shows that Gingrich is currently viewed as the GOP candidate who is not only the most knowledgeable and experienced, but as the one who would be "best able to bring Republicans and Democrats together."

Gingrich, as House speaker in the mid-1990s, presided over two government shutdowns in a showdown with President Clinton.

Gingrich, who served in Congress for 20 years representing his Georgia district and remained in Washington where he's earned millions in consulting fees and giving speeches, is also viewed in Iowa as the candidate most likely to "bring about real change."

"He's come to every debate with a new idea," she said. "Some are clever, some are end-arounds."

"He takes things that are rather complicated," Selzer says, "and suggests that they're not wild things, that they're logical extensions of what's been done before."

Selzer's survey found that only 28 percent of likely Republican caucus-goers have made up their mind, and that 60 percent say they are still open to persuasion.

Of those remaining open, 92 percent said they just want to keep an open mind until closer to the caucuses.

"This is the Iowa DNA," Selzer says. "Iowa is first; it's not as if they have states to look at."

That may sound like opportunity to Ron Paul and Mitt Romney, who ran second and third to Gingrich in the Iowa poll. But an analysis by Nate Silver in his FiveThirtyEight blog for the New York Times, suggests that Gingrich's Iowa fortunes look good.

Silver looked at caucus polls dating back to 1980, and found that the candidate leading in the polls one month before the contest won 8 out of 11 times.

Selzer said that Romney, who lost ground in the latest poll, should be most concerned.

"His floor fell," she said, noting that he been announcing endorsements, lining up people to come to the state, and opened an office. "My question is, did he wait too long?"

"Or maybe the timing is perfect, with Gingrich now getting scrutiny," she said. "But we're now in a dash to the finish — and that's not a time you want your candidate to fall in the polls."

Gingrich sought to capitalize on his momentum in Iowa, launching a television ad campaign that sells his softer side. And, while in New York on Monday, he continued his pitch for putting poor American children to work so they can learn the connection between jobs and income.

Oh, and he reiterated his support for abolishing the capital gains tax, a move that tax experts say would disproportionately benefit the nation's wealthiest.