Accessibility links
Why Iowa Could Be Rick Perry's 'Alamo' Moment : It's All Politics The GOP hopeful has been making a last-ditch play to keep his campaign alive by placing in the top three in Iowa, where he once topped the Republican caucus polls. A good showing in Saturday night's debate would help.

Why Iowa Could Be Rick Perry's 'Alamo' Moment

Why Iowa Could Be Rick Perry's 'Alamo' Moment 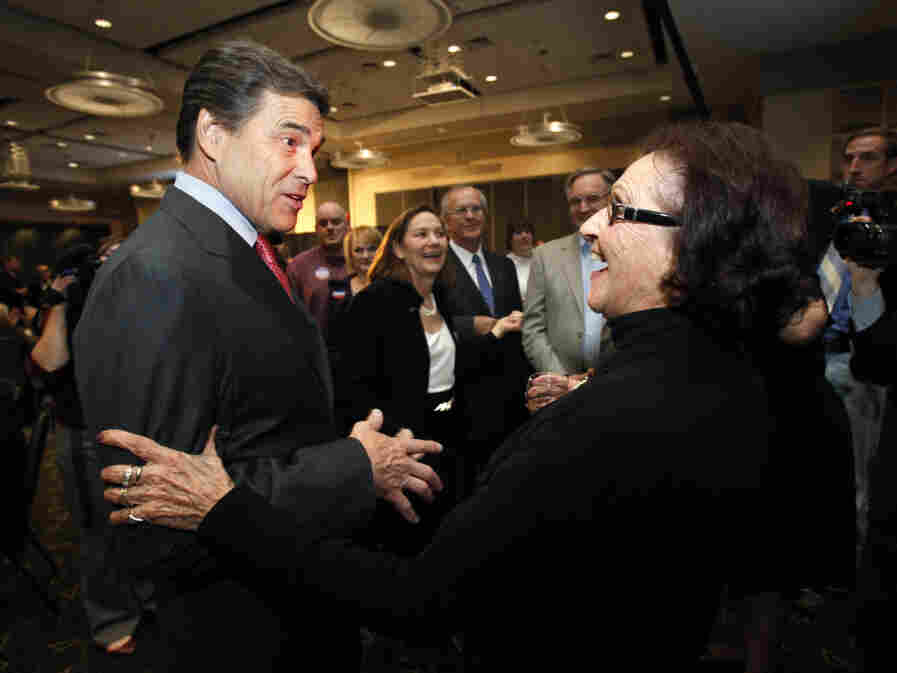 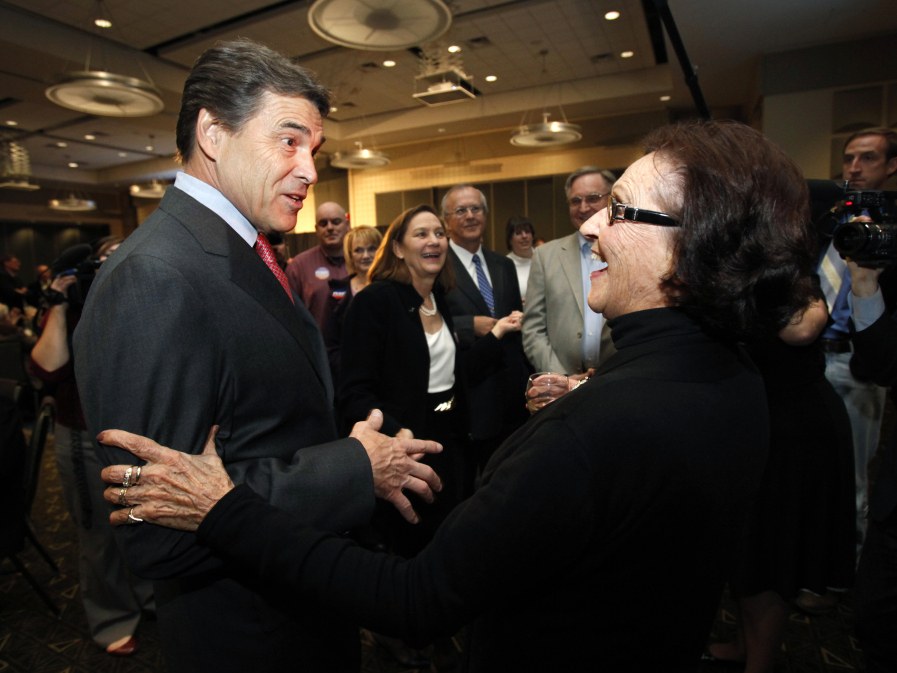 In the hours before Saturday's pivotal Republican presidential debate in Iowa, attention has been riveted on the intensifying battle between front-runners Mitt Romney and Newt Gingrich.

Waiting in the wings, with hope and a prayer — directed squarely at the state's evangelical voters — is, improbably, Texas Gov. Rick Perry.

Perry's presidential political obituary has been written for weeks. His early promise as the anti-Romney candidate turned to ashes in one of the more stunning campaign implosions in recent, and not-so-recent, memory.

But Perry has been making a last-ditch play to keep his campaign alive by placing in the top three in Iowa, where he once topped the Republican caucus polls, albeit before he formally began his run in late summer.

In a direct appeal to the state's conflicted conservative evangelical voters, the Texas governor this week aired an anti-gay ad that also revived the tired annual "war on Christmas/religion" trope, and another that linked both Romney and Gingrich with President Obama and "government-mandated health care."

And, starting Wednesday, he will embark on a two-week, 44-town bus tour through the Hawkeye State.

Though Perry insisted this week that doing well in Iowa is not imperative to the future of his campaign ("Not at all, not at all," he said during a CNN interview), few would agree.

His once highflying campaign money machine has stalled, and he is struggling mightily to reframe voters' views of him after embarrassing debate performances and odd speeches that have made him a YouTube favorite.

He did not exactly redeem himself on Friday in an editorial board meeting with the Des Moines Register, when he referred to the "eight un-elected" judges of the Supreme Court (it has nine justices) and forgot the name of Justice Sonia Sotomayor.

Although some have blamed Perry's stumbles on medication he took after back surgery in July, Perry has chalked them up to the rigors of campaigning.

"He's at his Alamo now," says Richard Murray of the University of Houston. "And without the evangelical voters getting behind him, he's dead meat."

Could Perry, who is returning to a campaign style familiar to those who have followed him for years in Texas, make inroads in Iowa during these remaining weeks? Especially now that thrice-married Gingrich, who recently beguiled many evangelicals with his redemption story, is getting a much harsher front-runner vetting?

"I never count him out, and he's now playing to type — gay-baiting to mobilize a component of the Republican base," Kronberg says. "Will evangelicals forgive Gingrich for his transgressions and Romney for his [Mormon] faith?"

Perry's campaign hinges on getting "no" for an answer.

Gingrich's marital past this week came under sharp attack in a new video distributed by evangelical pastors who prefer candidates Michele Bachmann, the Minnesota congresswoman, and Rick Santorum, a former senator from Pennsylvania.

But influential Iowa evangelical Bob Vander Plaats, who has been recently enamored of Gingrich, has yet to endorse a candidate. If Vander Plaats moves to Perry over the next two weeks, the game changes.

Kronberg theorizes that if Perry, with help, can get members from an additional 50 evangelical churches to show up caucus night and vote for him, he could end up in third place — "and that's three higher than where he was polling a few weeks ago," he said.

Two polls out this week show Perry hovering around 11 percent — within potential striking distance of the top three candidates.

He'll have to get by Texas Rep. Ron Paul, who has remained consistently in third place in Iowa polls and who does well in straw polls.

The Iowa GOP caucuses are, essentially, straw polls throughout the state's precinct. Caucus night, supporters are allowed to make a case for their candidates and then attendees write their preferred candidate on a secret ballot.

One person, one vote. None of the horse trading that goes on during the state's Democratic caucuses, where candidates have to reach a support threshold of 15 percent to even be considered beyond the first round of caucus-night voting.

To have any chance of breaking into the top three in January, Perry needs a good night Saturday in Iowa, and his campaign is no doubt crossing its fingers that someone other than their candidate will first take up the attack on Gingrich.

"My suspicion is that everyone is going to wait and see if Ron Paul does it first, and then join in," says Jim Henson, director of the Texas Politics Project at the University of Texas. "But there's an interesting political trap for Perry because he's been closely associated with Gingrich."

The men are friendly, and Perry is likely to question Gingrich's moral bona fides "more affirmatively," Henson says. Paul, on the other hand, launched a devastating ad against Gingrich recently, calling into question his conservatism.

"I expect Perry to swing for the fences Saturday," Henson said, saying that his glimmer of hope comes in polls that show a majority of likely GOP caucusgoers are still making up their minds.

"The real issue here is that Republican primary voter preferences are clearly unsettled," he said. "It's one of the underappreciated consequences of a contest where everyone has taken their turn as the anti-Romney candidate — and that has meant that people are accepting the fluidity of the race."

The disaster that has been Perry's campaign has many in Texas scratching their heads. But Kronberg and others say they see Perry's atrophied campaign skills returning, as well as a necessary tamping down of what Kronberg described as the candidate's exaggerated "bantam rooster with Texas braggadocio" persona of the early months of his campaign.

If evangelical leaders "can't sell Newt," Murray says, "it could keep Perry alive for a while longer."

The window is open, but barely.