Accessibility links
Romney Confronted By Gay Vietnam Vet On Same-Sex Marriage Stance : It's All Politics Politicians and journalists always run a risk when they judge a voter strictly on on appearances. There was a reminder of that Monday when Mitt Romney was forced to defend his opposition to gay marriage during a restaurant encounter with a grizzled Vietnam veteran who happened to be gay. 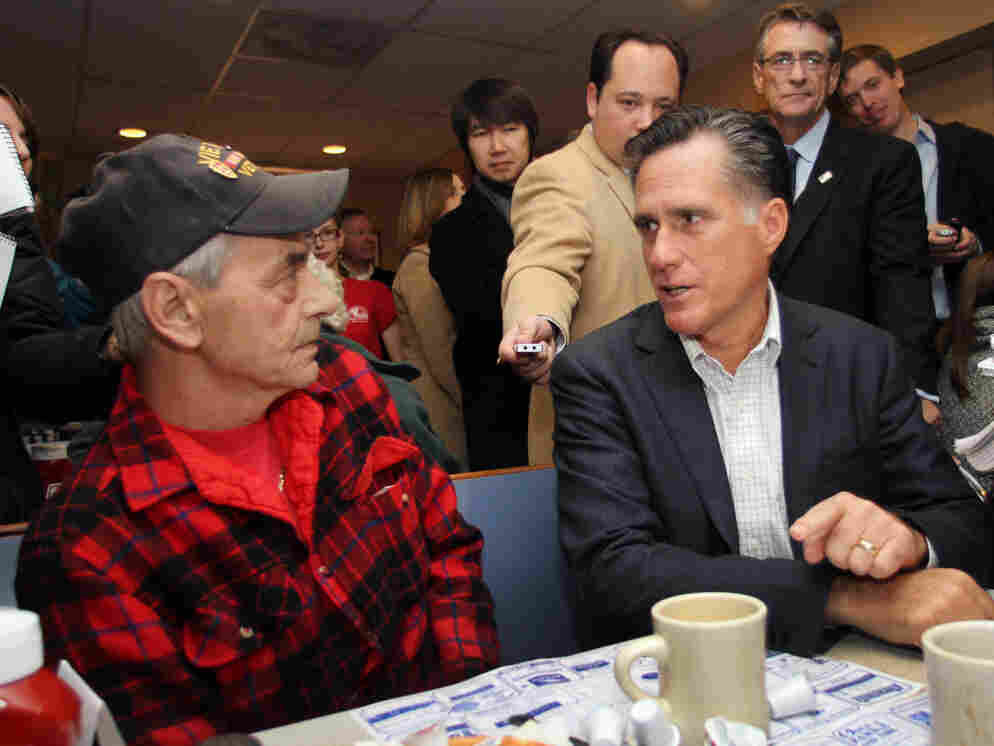 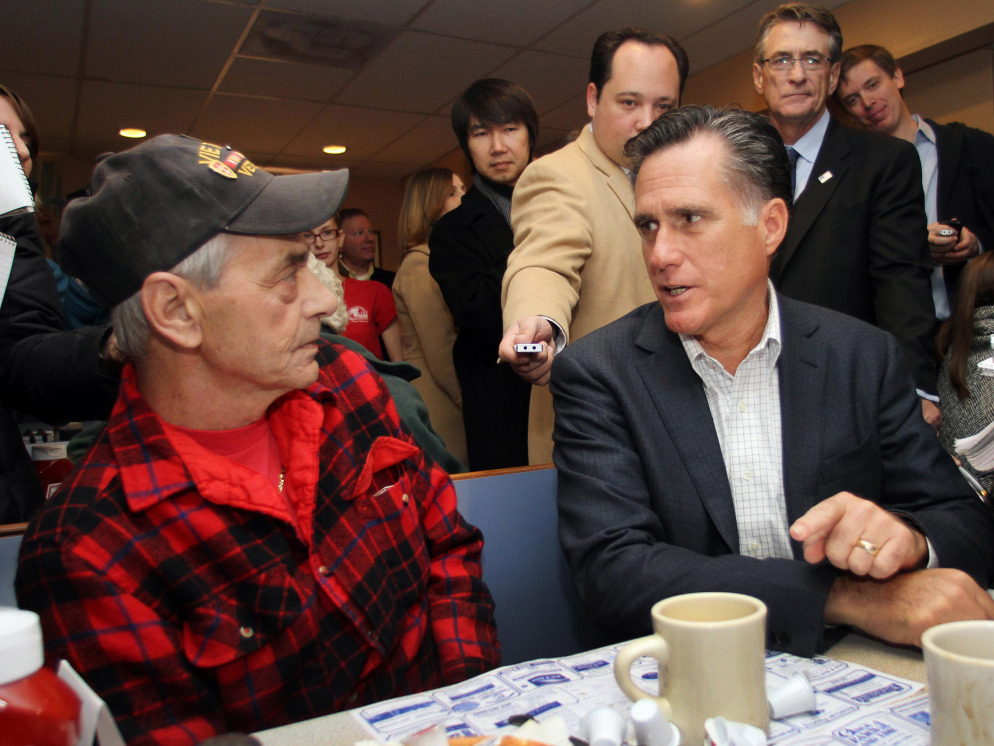 Politicians and journalists always run a risk when they judge a voter strictly on on appearances.

There was a reminder of that Monday when Mitt Romney was forced to defend his opposition to gay marriage during a restaurant encounter with a grizzled Vietnam veteran who happened to be gay.

As it turned out the vet, Bob Garon, also was sitting at a restaurant booth with his husband when the unsuspecting Romney, campaigning at the Manchester restaurant, asked if he could sit down with them.

Josh Rogers of New Hampshire Public Radio, was there and reported on the encounter for All Things Considered Monday (Politico has video.):

JOSH: "From his Vietnam veteran baseball cap to his red flannel shirt and cigarettes, Bob Garon must have looked promisingly conservative to Mitt Romney. And so Romney asked to sit down at Garon's table at Chez Vachon."

Then Garon asked for Romney's views on gay marriage, which is legal in New Hampshire.

ROMNEY: "I believe marriage is a relationship between a man and a woman."

JOSH: "Garon, who was eating at the crowded breakfast spot with his husband Bob Lemire, then pressed Romney for answers."

ROMNEY: "And the Defense of Marriage Act that exists in Washington today defines benefits, whether for veterans or for non-veterans, as between married spouses, and for me that's a man and a woman. And we apparently disagree."

GARON: "It's good to know how you feel because you do not believe that everyone is entitled to their constitutional rights."

ROMNEY: "No, actually I think at the time the Constitution was written it was pretty clear that marriage is between a man and a woman, and I don't believe the Supreme Court has changed that."

JOSH: "A Romney staffer then moved in."

AIDE: "Governor we've got to get on to Fox News right now."

JOSH: "But Garon and Romney continued."

GARON: "I guess the question was too hot?"

ROMNEY: "You said you wanted a yes or no answer, and I gave you the answer."

GARON: "You did, and I appreciate your answer. And you know I also learned something, and New Hampshire is right. You have to look a man in the eye to get a good answer and you know what Governor, good luck."

ROMNEY: "Thank you I appreciate it. Have a good day, sir."

ROMNEY: "You are right about that."

JOSH: "Afterwards, Garon was surrounded by reporters. He said he was a registered independent and served in Vietnam in 1967. Garon added that he judges people by their eyes, and that when he looked Romney in the eye he didn't see a commander-in-chief."

GARON: "Well I was undecided but I am totally convinced today that he is not going to be my president. Obama will at least entertain the idea. This man is 'no way Jose.' Well take your 'no way Jose' back to Massachusetts."

While Romney may have lost Garon's vote — that is, if he ever had a chance to get it in the first place — his run-in with the Vietnam vet gave him a chance to display his opposition to same-sex marriage, an area of conservative orthodoxy where his stance appears to have stayed consistent over the years.

At a time when Romney is struggling to win over more conservatives, that encounter could actually help him.