Accessibility links
Poll Suggests Latino Voters See 'Hostile' GOP : It's All Politics If Sen. Marco Rubio received the GOP's vice presidential nomination, only 13 percent of Latinos said they would be "much more likely" to vote Republican. Nearly half said it would have no effect on their vote. 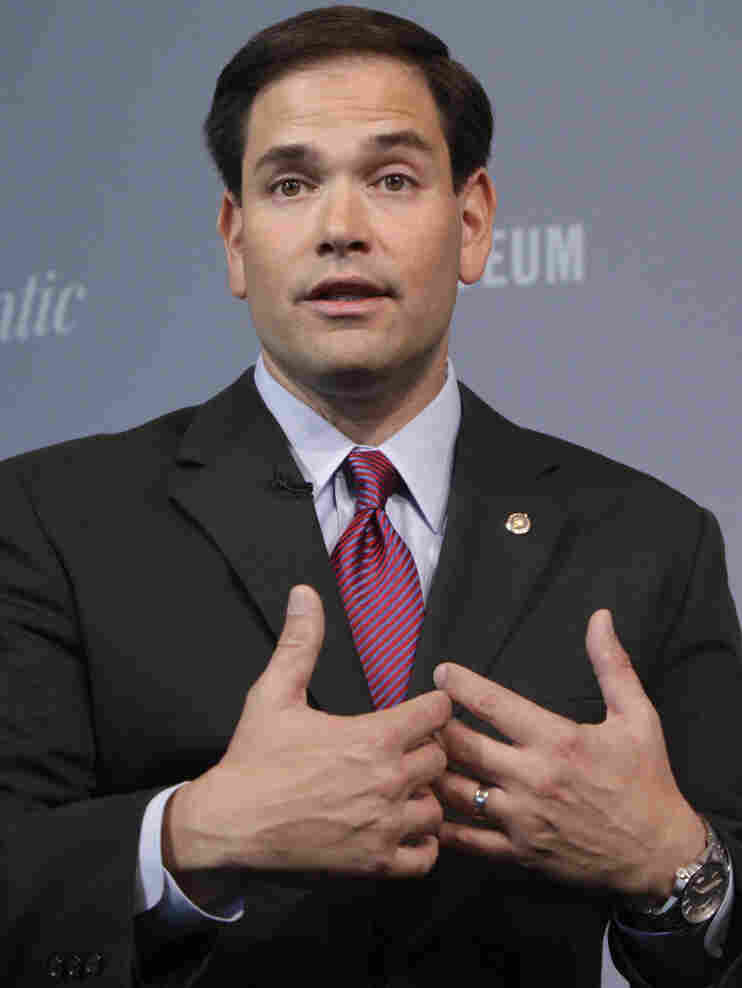 Nearly half of the Latino voters in a new survey said nominating Sen. Marco Rubio as a vice presidential candidate would have no effect on their votes. Yuri Gripas/Reuters /Landov hide caption 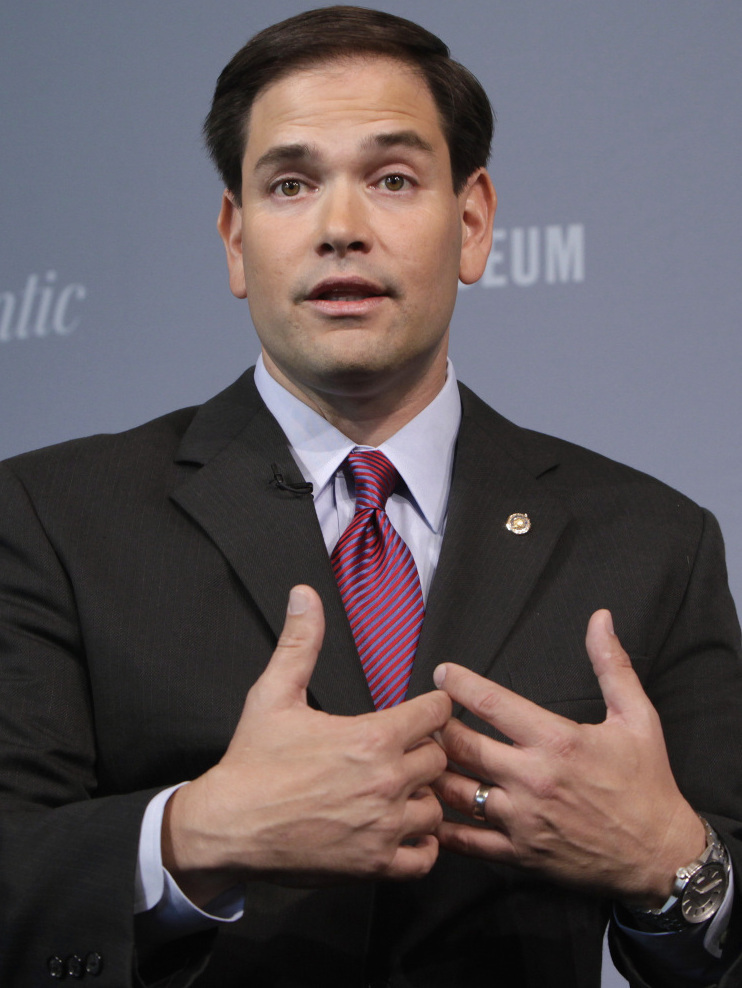 Nearly half of the Latino voters in a new survey said nominating Sen. Marco Rubio as a vice presidential candidate would have no effect on their votes.

The overwhelming majority of Latino voters believe that the Republican Party ignores them or is outright "hostile," and that nominating Hispanic Sen. Marco Rubio as a vice presidential candidate might do little to change it, according to a national poll released Monday.

The December survey, conducted by impreMedia and the polling group Latino Decisions, is the first to test the popularity of the freshman senator from Florida with America's Hispanics.

Since his election in 2010, the 40-year-old Rubio, with his considerable political talents and Tea Party support, has emerged as a figure expected to help improve the Republicans' outreach to Hispanics — whose population growth gives them a pivotal role in the 2012 elections.

But Rubio and his party may have a difficult time of it. (And not just because Rubio earlier stirred controversy when reporters raised questions about his background as a Cuban exile.)

The survey of 500 Latino registered voters found that Hispanics continue to lean toward President Obama and other Democratic candidates, and that they feel alienated by Republicans because of their general support for tougher immigration enforcement instead of a path to legal status.

Forty-six percent of Latino voters said Republicans "don't care too much" about Hispanics, and another 27 percent said they "are being hostile," the poll found.

Pollsters say the strongest opinions — in this case, those "much more likely" to vote Republican if Rubio is nominated — tend to provide the most accurate indicator of voting habits.

"I think they have a very serious problem," Matt Barreto, the principal pollster for Latino Decisions, says of the Republican Party. "And Rubio is still new on the scene and not extremely well known. Over the last five years, a lot of Latinos have been upset and moving away from the party because of the hard stance on immigration. So the Republican Party has a lot of work to do."

Now the nation's largest minority group, Latinos are expected to factor heavily in next year's elections. Some 22 million or more Hispanics are projected to be eligible to vote in 2012. And Latino turnout could reach a record 12 million, according to the National Association of Latino Elected Officials.

For 2012, strong Hispanic turnout could easily determine Election Day outcomes in several battleground states with large Latino populations, such as Florida, Nevada, Colorado and possibly Virginia (all states that Obama won in 2008).

"I think most [Republican] strategists look at the arithmetic and realize they have to do a little better with Hispanics if they want to win the mountain states and some others," says Jack Pitney, a political science professor at Claremont McKenna College in California. "If Mitt Romney is the nominee, he will probably consider Rubio or [New Mexico Gov.] Susana Martinez as his running mate. That wouldn't bring the Hispanic vote as a bloc, but it could reduce Obama's advantage. ... If Mitt Romney could shift maybe 5 points among Latinos from Democrats to Republicans, that could tip several close states to the Republicans."

Latino Decisions says the nominee first has to shore up support among Latino Republicans, who have drifted away. The group's research analyst, Gabriel Sanchez, cites poll numbers showing that Rubio, as the running mate, could help accomplish that.

"Having Rubio on the ticket will probably galvanize Latino Republicans and get more of them out to vote, but it probably won't have much effect in getting crossover votes from Latino Democrats," says Sanchez, also a political science professor at the University of New Mexico.

Both parties are devising Hispanic outreach strategies. The Democratic Party is counting on Hispanics to be an important part of a coalition of support that includes African-Americans and women.

The Republican Party is trying to mobilize in part by increasing its support of promising Latino candidates. The Republican State Leadership Committee plans to invest $3 million to recruit 100 Hispanic candidates to run for state legislative seats across the nation in 2012.

But the GOP has an uphill climb. In addition, the 2010 midterm elections found that Latinos bucked the Republican wave as roughly 60 percent of them voted for Democrats running for House seats.

As expected, the poll found Latinos far more supportive of Democrats than Republicans. For the first time since February, more than 50 percent of Latino respondents said Democrats are doing a "good job" reaching out to them.

But that support remains soft, particularly for Obama. While the president's overall job approval among Latinos was 67 percent, only 32 percent "strongly approve." (Still, that's much higher than the roughly 44 percent of voters overall who approve of the job Obama is doing as president, according to the Real Clear Politics polling average.)

Latinos remain frustrated at Obama for failing to push immigration reform or the DREAM Act through Congress. More recently, Latino leaders and pro-immigrant activists have railed against the record number of deportations carried out by the Obama administration.

The feelings of dissatisfaction with both parties appears to explain the lack of enthusiasm Latinos expressed for next year's election. The poll found that 44 percent of respondents were "very enthusiastic" about voting, far lower than in 2008. Barreto says that rate must rise to 65 percent to ensure that Latino turnout approaches that of 2008, when roughly 9.7 million Hispanic voters cast ballots.