Accessibility links
Romney Regains Stride; Gingrich Shows Old Newt At Sioux City Debate : It's All Politics Mitt Romney returned to form in the final Republican presidential debate before the Jan. 3 Iowa caucuses. Romney, who had perhaps his shakiest debate performance in Des Moines over the weekend, appeared to regain his composure in Thursday night's debate in Sioux City, Iowa. 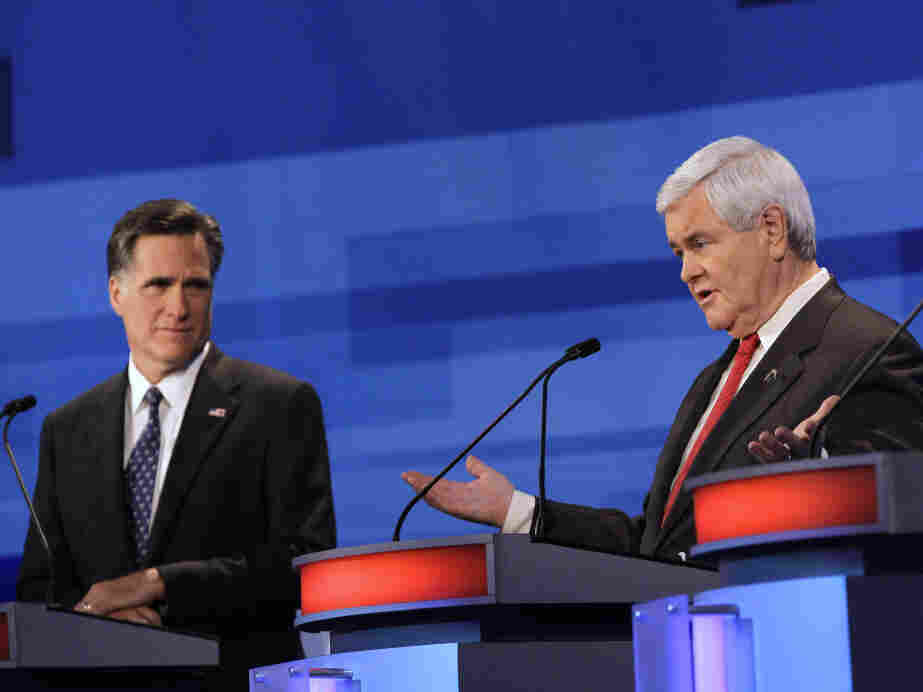 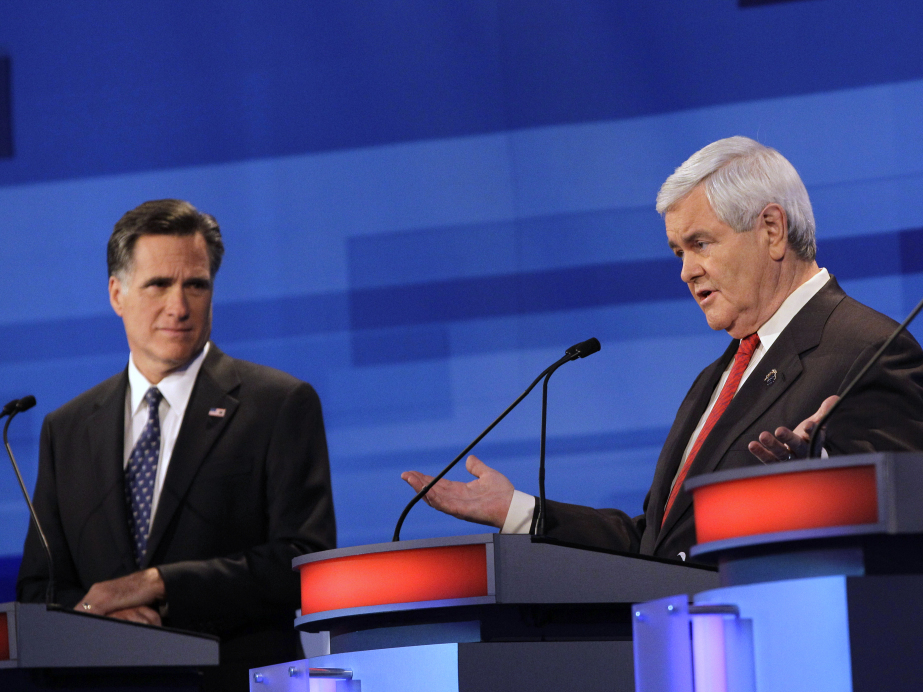 Mitt Romney returned to form in the final Republican presidential debate before the Jan. 3 Iowa caucuses.

Romney, who had perhaps his shakiest debate performance in Des Moines over the weekend, appeared to regain his composure in Thursday night's debate in Sioux City, Iowa.

He managed to once again convey the sense that he was the one GOP candidate of the seven remaining who could credibly stand on the same stage with President Obama next fall, the most electable of the candidates running for the Republican presidential nomination.

That being the case, Romney could said to be the debate's winner since he appeared to get his groove back and didn't add a new gaffe to the $10,000 bet offer of the last debate.

If the former Massachusetts governor came out the better for the debate, Newt Gingrich didn't.

Gingrich maintained his cool even though, as the race's latest frontrunner, he was the target at several points during the debate from his rivals. That was the new Newt on display.

But there were times when old Newt, the consummate Washington insider or proposer of crazy ideas, made an appearance.

At those moments, he did little to appeal to the conservative voters he needs in the primaries or the independents he would need in the general-election.

While there were no high-stake bets or utterances of "oops", the last debate had its moments.

There was the moment when Romney was asked about President Obama's response to the U.S. intelligence drone that somehow fell into Iranian hands. Romney ridiculed the Obama Administration's request of the Iranians to return the unmanned drone.

"The — this is a president — with the — the spy drone being brought down, he says pretty please? A foreign — (laughter) — a foreign policy based on pretty please? You got to be kidding."

"So I would suggest to you actually, as a historian, I may understand this better than lawyers. And as lawyers, those two attorneys general are behaving exactly like law schools, which have overly empowered lawyers to think that they can dictate to the rest of us." (Cheers, applause.)

It was red meat for the conservatives in the audience who have come to blame much of what's wrong with America on so-called activist judges. But as Rep. Ron Paul of Texas explained to Gingrich, there's this little notion called the constitutional separation of powers.

Speaking of Paul, he and Michele Bachmann provided some of the debate's most electrifying moments. Neither one has much of a chance of being president, but a back and forth they had over Iran was nonetheless riveting.

Paul made his familiar argument that it's the hawkish talk of U.S. politicians that's the problem, not Iranian intentions of getting a nuclear weapon. Bachmann vehemently disagreed.

PAUL: You know what I really fear about what's happening here? It's another Iraq coming. It is war propaganda going on. (Applause.) And — and we're arguing — to me the greatest danger is that we will have a president that will overreact, that we will soon bomb Iran.

BACHMANN: And with all due respect to Ron Paul, I think I have never heard a more dangerous answer for American security than the one that we just heard from Ron Paul. And I'll tell you the reason why. (Cheers, boos, applause.) And the reason — the reason — the reason why I would say that is because we know without a shadow of a doubt that Iran will take a nuclear weapon, they will use it to wipe our ally Israel off the face of the map, and they've stated they will use it against the United States of America.