Accessibility links
With Iowa Vote Looming, Gingrich Struggles To Stay Atop GOP Field : It's All Politics Republican presidential candidate Newt Gingrich got front-runner treatment during the final GOP debate before that state's crucial Jan. 3 caucuses, taking a pounding for his years as a highly-compensated Washington influence peddler. 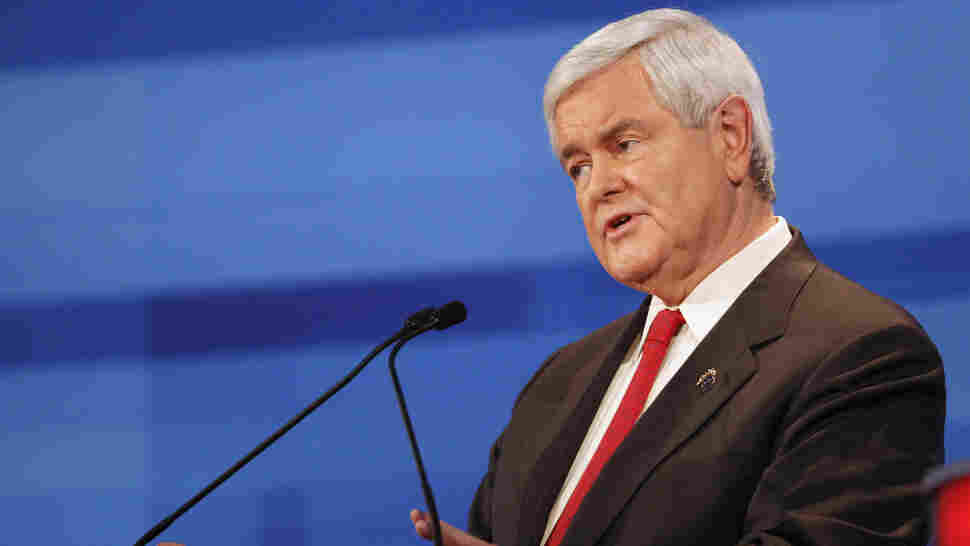 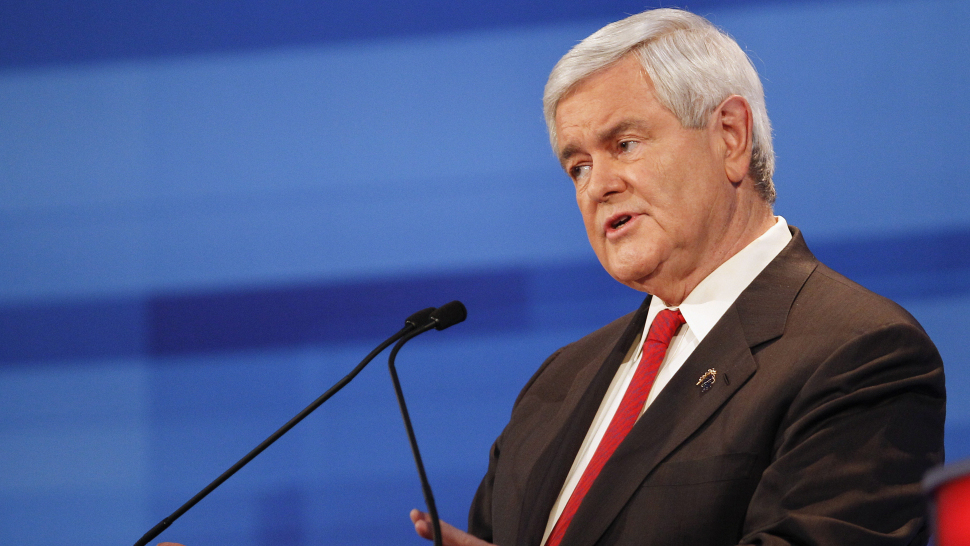 Republican presidential candidate Newt Gingrich got front-runner treatment Thursday night in Iowa during the final GOP debate before that state's crucial Jan. 3 caucuses, taking a pounding for his years as a highly-compensated Washington influence peddler.

Romney, a Mormon who has never appealed to the state's influential Christian conservative voting bloc, nonetheless drew strong applause for his sustained attacks on President Obama, characterizing him as a timid world leader.

"This has to be the American century," he said.

With his challengers staking out positions that ranged from abolishing courts and subpoenaing judges (Gingrich) to challenging reports that Iran is developing a nuclear capability (Texas Rep. Ron Paul), Romney appeared to re-emerge as the candidate best positioned to do well against the incumbent president.

He is expected to get a key Republican endorsement Friday morning from South Carolina Gov. Nikki Haley, Politico reported after the debate. That state holds its primary in January.

The Fox News event had been anticipated as a potential game changer in Iowa, with opportunities for struggling candidates like Texas Gov. Rick Perry and former Pennsylvania Sen. Rick Santorum to gain last-minute traction with undecided voters.

But there was little to suggest that their performances, even Perry's growing comfort on stage, would translate into much movement in the polls. And fireworks expected between frontrunners Gingrich and Romney, who this week characterized the former speaker as "zany," never ignited.

Romney may have been content to let other candidates and a barrage of anti-Gingrich television ads do the attacking on his behalf.

What Thursday's event in Sioux City did provide, in addition to a double-down by candidates on their anti-abortion and anti-same sex marriage positions, was a stark look at why so many Republicans, in Iowa and beyond, desperate to make Obama a one-term president, are struggling to commit to any of the candidates.

It was the issue that Fox News host Brett Baier raised first in the debate: electability. The question of who of the seven candidates can defeat Obama is paramount in the minds of Republican voters, he said.

Under tough questioning from Baier and the rest of the Fox News panel, Gingrich defended his conservative record, and pushed back on Bachmann's characterization of the $1.6 million he earned from taxpayer-backed mortgage giant Freddie Mac as a typical Washington scam.

Gingrich continued to insist, as he has in the past, that he never worked as a lobbyist, and that he believes in the goal of helping families buy homes.

"He cashed paychecks from Freddie Mac," Bachmann said, adding that she was "shocked" when Gingrich defended the agency as a government-sponsored enterprise akin to a credit union.

"You don't need to be within the technical definition of a lobbyist to be an influence peddler," said Bachmann.

It was a bad stretch for Gingrich, who rallied by the end of the debate with his conservative crowd-pleasing call to dismantle courts that, he says, have become "grotesquely dictatorial."

Bachmann expressed similar anti-judicial branch sentiments, but Paul cautioned that getting rid of courts and subpoenaing judges whose decisions one might not like is "opening up a can of worms" and "an affront to the separation of powers."

The proper procedure for removing judges, Paul said, is impeachment.

Bachman also mixed it up vigorously with Paul over the issue of Iran's nuclear capabilities and U.S. military spending.

The anti-war Paul, who has been picking up steam in the polls, may have frozen his movement with Iowa Republicans Thursday with his emotional — almost angry — assertion that saber-rattlers are selling "propaganda" that Iran is close to developing a nuclear capability to justify another war.

"You cannot solve these problems," he said, "with war."

Though Iowa's likely GOP caucus-goers, dominated by Christian conservatives, heard the candidates underscore their anti-abortion and anti-same sex marriage bona fides, this was not new information.

It was Romney, with his focus on Obama and with his challengers seemingly disinterested in attacking him, who came away from the debate appearing strengthened.

Under vigorous questioning by debate moderators, Romney, who made millions as head of a private equity firm that bought and sold companies, defended his record there despite the failure of some of the enterprises.

And he also attempted another explanation of his changing position on abortion, for example. He once supported a women's right to legal abortion.

"Where I was wrong," he said, "I've tried to correct myself."

Though Gingrich rallied, and joked that he'd been editing himself so as not to appear "zany," — a reference to Romney's description of him in a recent New York Times interview — Bachmann's sustained attack and sharp questioning from the debate moderators may contribute to what appears to be his weakening in the polls.

Bachmann, who won the Iowa GOP straw poll in August, had a strong night, but has a lot of ground to make up. She has been running a distant fourth or fifth in most recent polls.

Game changer? Not Thursday night. But there are still 19 days to go before the official Iowa start of the 2012 presidential contest season.