Accessibility links
Perry Asks Federal Court To Halt Virginia Primary Ballot : It's All Politics The Texas governor asked a federal court to stop Virginia from printing its March 6 GOP primary ballots while it considers a legal challenge to the ballot qualification measures, which would leave only two candidates on the official Republican ballot. Newt Gingrich also is considering action. 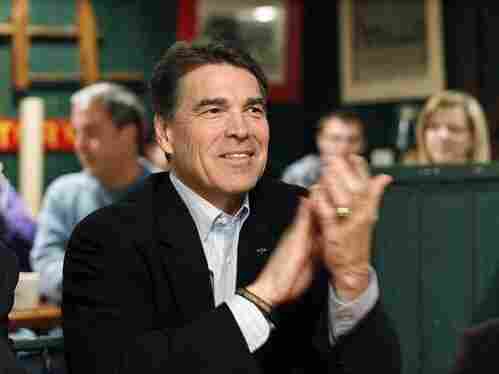 Texas Gov. Rick Perry on Wednesday asked a federal court in Virginia to halt the printing of ballots for the state's March 6 Republican primary unless his name is added.

Perry, who filed suit Tuesday in U.S. District Court for the Eastern District of Virginia against the Virginia State Board of Elections and the state's Republican Party chairman, on Wednesday asked the court to issue a temporary restraining order.

As of now, Republican voters in the state's Super Tuesday primary will have only two choices — former Massachusetts Gov. Mitt Romney and Texas Rep. Ron Paul.

Former House Speaker Newt Gingrich also has objected to the requirements to get on Virginia's Republican primary ballot.

"Virginia ballot access rules are among the most onerous and are particularly problematic in a multi-candidate election," Ray Sullivan, a spokesman for Perry, said in a statement, Bloomberg News reported Wednesday. "We believe that the Virginia provisions unconstitutionally restrict the rights of candidates and voters by severely restricting access to the ballot."

The Virginia Republican Party announced this weekend that only Romney and Paul had qualified for the ballot. But Monday night, the Citizens for the Republic — a national conservative group based in Virginia — announced it was joining forces with former Virginia Democratic Party Chairman Paul Goldman to fight the decision.

While many states have minimal requirements for qualifying for a primary ballot, Virginia requires 10,000 signatures (with at least 400 from each of the state's 11 congressional districts), and a policy that those obtaining signatures be state residents.

In Wednesday's request for a temporary restraining order and preliminary injunction, Perry asked that the court stop enforcement of the state-residency requirement for those gathering petitions, to stop the state Board of Elections from conducting a drawing to set the order of names on the ballot, and to order the board to print ballots with Perry's name included.

"Voters deserve the right to vote for any top contender, especially leading candidates," Gingrich campaign director Michael Krull said in a statement, in which he vowed to pursue an "aggressive" write-in campaign.

Write-ins are allowed "at all elections except primary elections," the state code says. "There is no ability for a candidate to be written in," confirmed Christopher Piper, manager of election services with the State Board of Elections.

Goldman, a Richmond, Va., attorney, said: "The question isn't whether something is right or wrong. It's when you see something that's wrong whether you have the gumption to change it."

Asked why a Democrat would take up this fight, Goldman said: "This is about the right of the people to exercise their right to vote. ... The super partisanship that we have today is not helpful."