Accessibility links
Perry Sees 'No Viable Path Forward': The Fall Of A Once Promising Front-Runner : It's All Politics Rick Perry garnered instant front-runner status in some polls when he joined the GOP presidential race. But he slid to the back of the pack after embarrassing debate performances. All along, his bid for the nomination seemed outsize. So, too, were the expectations, which ended Thursday.

Perry Sees 'No Viable Path Forward': The Fall Of A Once Promising Front-Runner

Perry Sees 'No Viable Path Forward': The Fall Of A Once Promising Front-Runner 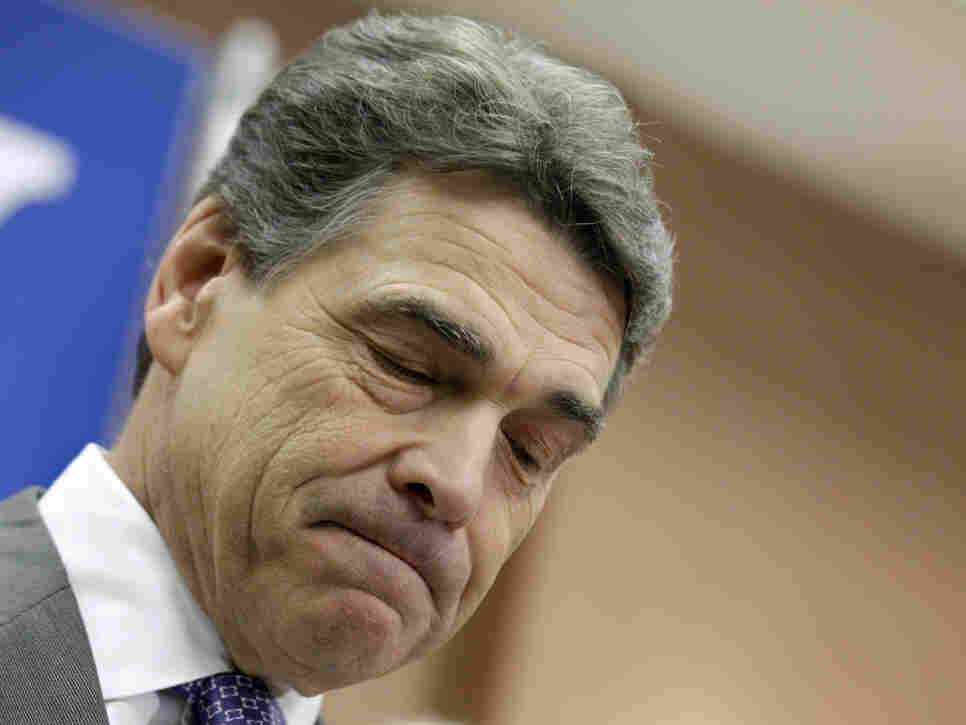 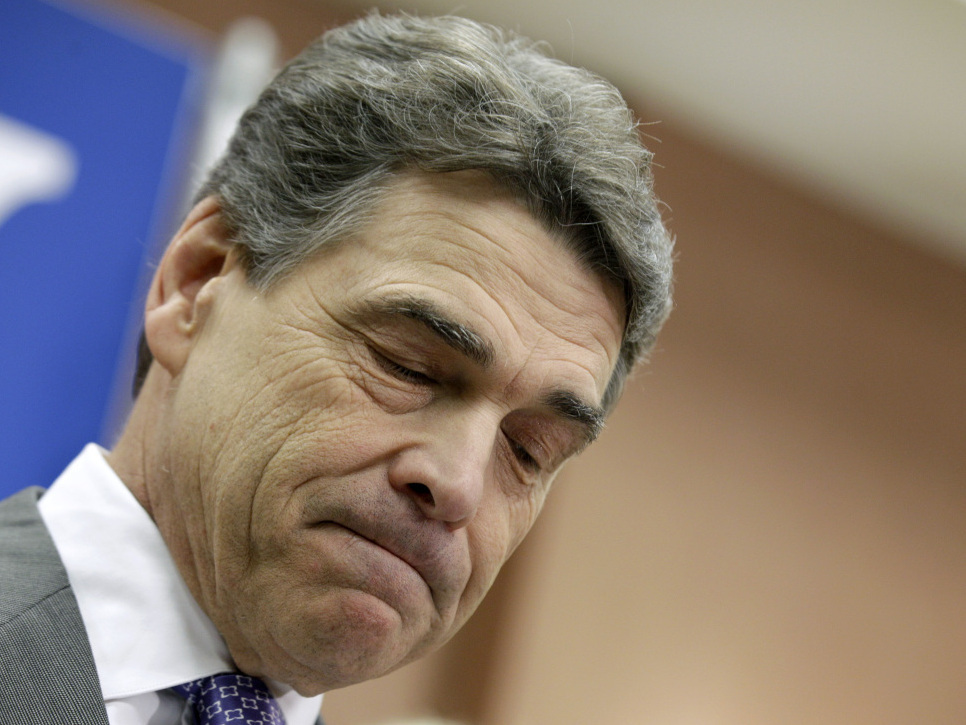 Perry pauses while announcing he is suspending his campaign and endorsing Newt Gingrich, Thursday in North Charleston, S.C.

Like the saying goes in his home state, everything about Texas Gov. Rick Perry's presidential campaign was big.

From the start of his candidacy, when he garnered instant front-runner status in some polls, to his embarrassing debate performances and his slide to the back of the pack, Perry's bid for the Republican nomination seemed outsized. So, too, were the expectations.

Perry's endorsement of Gingrich was clearly meant to blunt the momentum of former Massachusetts Gov. Mitt Romney ahead of Saturday's South Carolina primary.

Calling Gingrich "a conservative visionary who can transform our country," Perry said his objective is "not only to defeat President Obama, but to replace him with a conservative leader who will bring about real change."

Of his own candidacy, Perry said: "There is no viable path forward. ... I know when it's time to make a strategic retreat."

In a Republican field of candidates with glaring shortcomings, Perry presented a promising mix of attributes when he launched his campaign in August. He was a favorite of evangelicals and the Tea Party, the three-term governor of a large and electorally important state, and a prodigious fundraiser.

He had the charisma and enough of a populist streak that might help him fare well in a general election. And he had a timely campaign message — claiming that his low-tax, low-regulation approach to governing had created more than 265,000 Texas jobs over the past two years.

But, as it turned out, his long public record also provided grist for withering attacks against him. And then there were his gaffes, so many of which piled up that voters quickly cooled on him as a candidate apparently ill-prepared for the scrutiny and rigor of a presidential campaign.

An early problem was Perry's moderate position on illegal immigration, a commonly held stance in Texas given that Republicans there tread carefully on the issue to avoid alienating the large Latino population. But he stood out as a target among the GOP contenders, nearly all of whom took a hard line against extending government services to illegal immigrants.

Perry struggled to convincingly defend his signing of a Texas law that gave in-state college tuition to the children of illegal immigrants. Under intense attack during a debate in September, Perry shot back at his detractors: "I don't think you have a heart." The audience erupted in boos.

The following day, Romney pummeled Perry: "If you are opposed to illegal immigration, it doesn't mean you don't have a heart. It means you have a heart and a brain," he told a gathering of the Conservative Political Action Conference.

Perry also took fire for mandating that young girls in Texas receive the vaccine for the human papillomavirus, or HPV, a sexually transmitted disease. Many conservatives oppose the move as government overreach and a tacit approval of premarital sex.

In debates, Perry repeatedly defended his decision as an effort to prevent girls infected with the virus from contracting cervical cancer. But later, and still under heat, he backtracked slightly, saying he "would have done it differently" by working with state lawmakers instead of acting unilaterally.

Perry also took flak when a Washington Post story disclosed that his family owned a West Texas hunting camp with a name that included the N-word. The name was once painted in block letters on a large, flat rock at the front of the property.

The more Perry stumbled over his words, the further he sank in the polls. By October, with his campaign foundering, Perry had shaken up his staff, hiring veteran operatives with national campaign experience, including Joe Allbaugh, a longtime aide to George W. Bush.

But they couldn't stop Perry from making his most infamous goof. During the CNBC debate in November, he forgot the name of one of the federal agencies he vowed to eliminate: "The third agency of government I would do away with ... let's see," he said. "I can't. The third one, I can't. Sorry. Oops."

Some observers blamed Perry's stumbles on back surgery that he endured in July. Perry himself first said the surgery and its aftereffects had no effect. 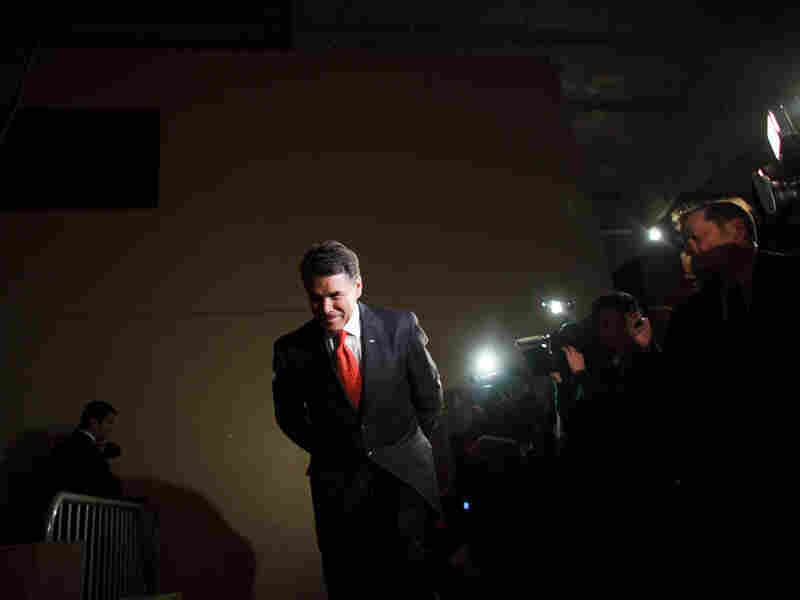 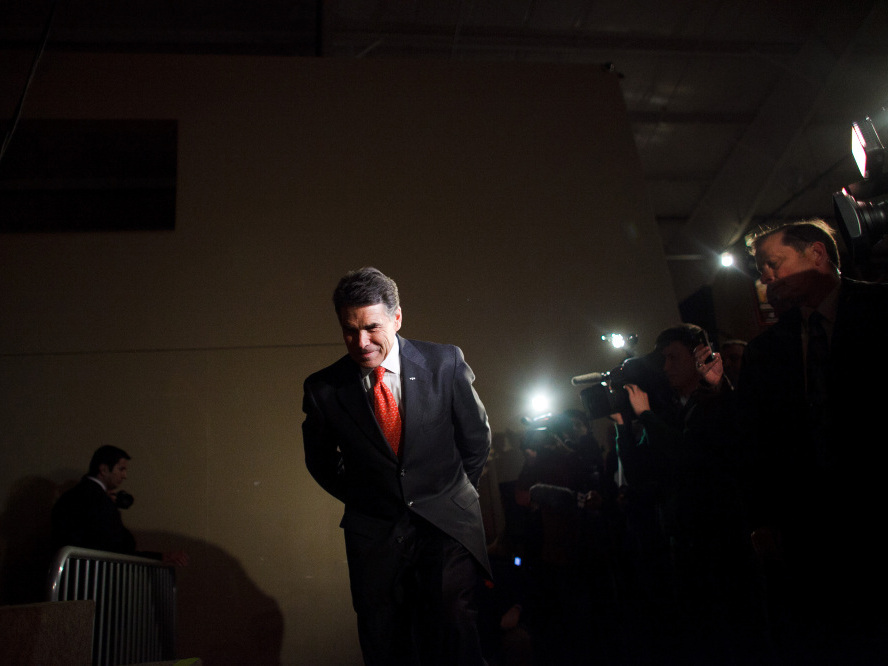 Perry prepares to speak with voters attending the West Des Moines caucus in Iowa on Jan. 3.

"That was probably too many days on the road. It had nothing to do with medication," he said at one point. But later he admitted it might have taken a toll.

But the string of poor debate performances took a toll on Perry's fundraising, too.

In the final days before the Iowa caucuses, Perry's new team had retooled the candidate's message and poured millions into TV advertising to essentially reintroduce the governor to Iowans. 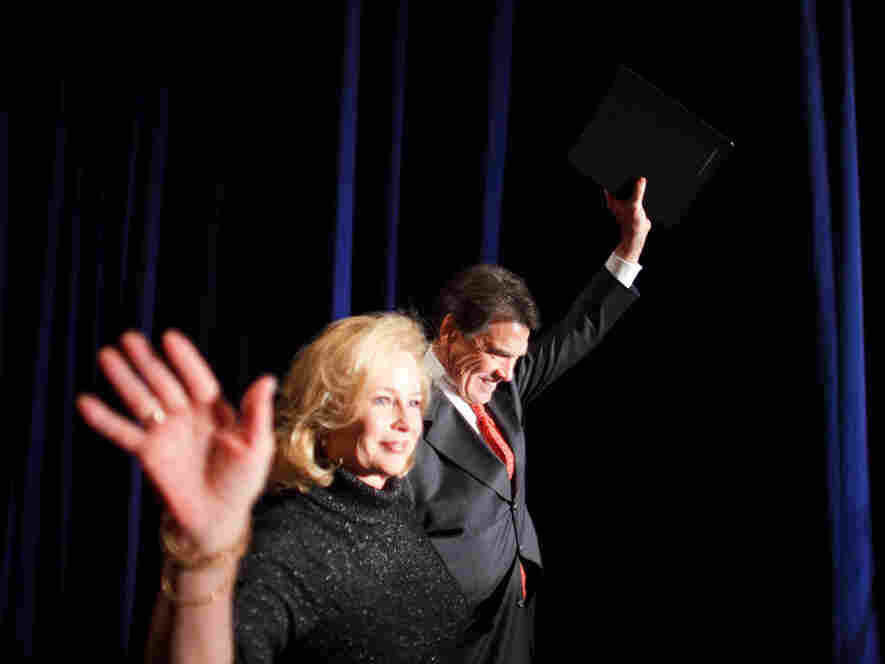 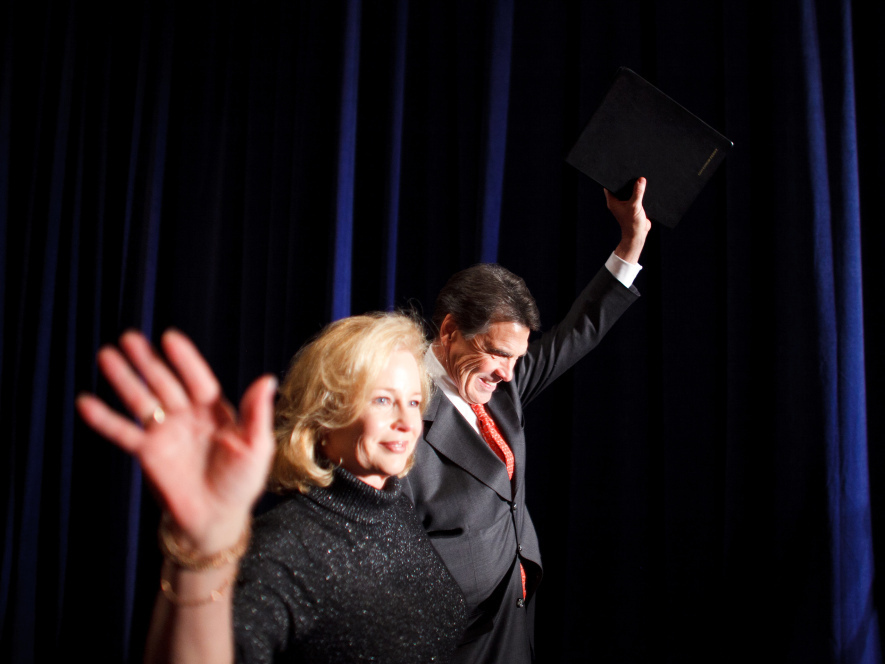 He sharpened his rhetoric and took aim at his opponents. He billed himself as "the only Washington outsider." And he questioned the conservative credentials of other candidates, directly taking on Rick Santorum, the former Pennsylvania senator, in a battle for Iowa's evangelical Christian voters.

But it wasn't enough to persuade caucus participants to give Perry another look. Santorum, once at the bottom of the field, already had overtaken Perry in the polls. Once projected to finish in the top three in Iowa, Perry placed fifth, gaining only about 10 percent of the caucus support.

"I've decided to return to Texas and assess the results of tonight's caucus," Perry told supporters late Tuesday, as final results trickled in.

Hours earlier, before caucus results were reported, an unbowed Perry told CNN: "This election is far from decided. ... South Carolina will give us a better clue who will be the nominee."

The Perry campaign decided to skip the New Hampshire primary. Few expected his folksy style and solidly conservative message to resonate in the New England state. And most polls showed as much.

Making His Stand In The South

Perry chose to make his stand in South Carolina, home to the first Southern primary and an electorate expected to be more open to him. His campaign had begun to build a field organization in South Carolina before the Iowa caucuses occurred.

But Perry was never really able to regain his stride. Mired in the low single digits in South Carolina polls, Perry decided to cut his losses just two days before the state's primary.