Accessibility links
Time Is Running Out To Knock Romney Down : It's All Politics Front-runner Mitt Romney was hardly bruised in Saturday night's debate, though his rivals exchanged their share of blows. Time is tight to hurt his campaign with the New Hampshire primary bearing down on Tuesday.

Time Is Running Out To Knock Romney Down

Time Is Running Out To Knock Romney Down 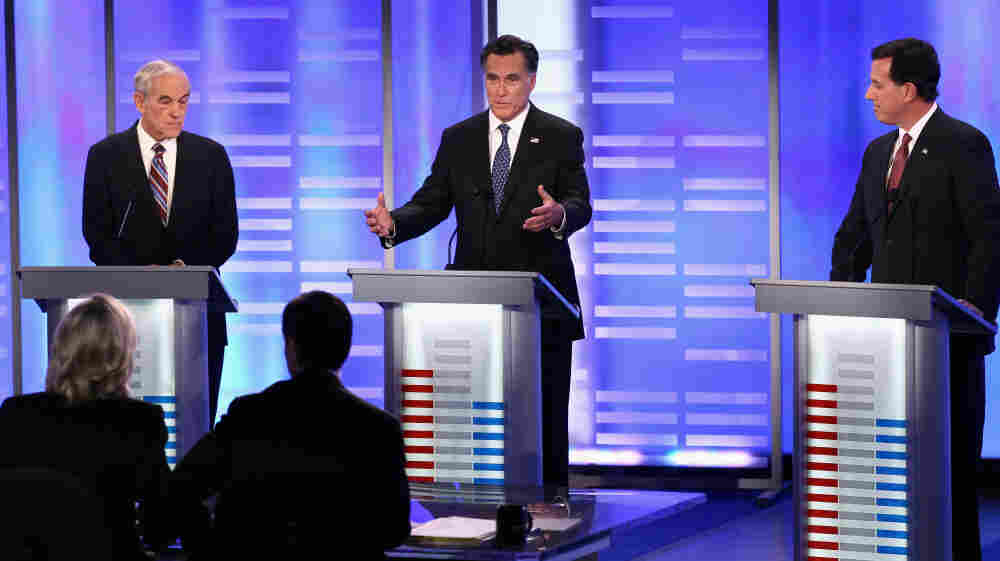 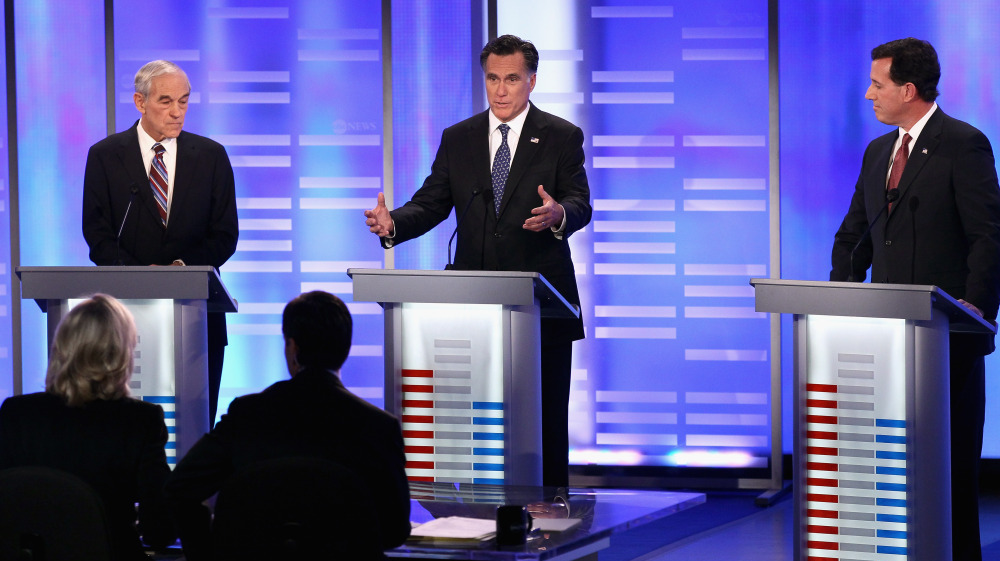 Once more, the great media consensus was confounded. Saturday night's debate at St. Anselm's College in Manchester, N.H., produced another battle among half a dozen presidential contenders, much like a dozen before it. Front-runner Mitt Romney was neither knocked out nor even knocked down. He was scarcely even knocked around.

Once again, the evening ended with the bruises pretty equally distributed among the contestants. And with the New Hampshire primary bearing down on Tuesday, virtually no time remains for Romney's rivals to bring him down.

It was not supposed to be like this. Not this time. Since the Iowa caucuses earlier in the week, every reporter, commentator and kibitzer paying attention to the Republican presidential decathlon predicted Romney's five remaining rivals would gang tackle him at St. Anselm's. Myself included.

But it didn't happen.

The debate was over before any of Romney's rivals had landed the big haymaker. Far from catching him in a crossfire, they took just as many shots at each other.

So what was it that stayed the hands of these supposed co-conspirators? Was it the format? Or were the moderators too intent on distributing the confrontations among various pairings?

Within the first half hour, the liveliest interchange was between Rick Santorum, the former senator, and Ron Paul, the current congressman. They feuded over federal spending and size of government and true conservatism. Later they went at it again over who was more truthful about the other. When given a chance to repeat his own denigration of Romney as a manager rather than a leader, Santorum hemmed and hawed.

The biggest disappointment for those expecting Romney to be roughed up was the performance of Newt Gingrich. The former speaker has been fuming for weeks about the way Romney's independent allies knee-capped him with TV attack ads in Iowa. He has spoken of Romney himself as a liar. But at St. Anselm's, the meanest Gingrich got was a reference to a New York Times story questioning Romney's claims of job creation in his days at Bain Capital. Romney had his ready answer prepared and unloaded it in rapid-fire fashion. It might not have been charming, but it seemed to work.

Texas Gov. Rick Perry, who nearly quit the race earlier in the week, roared back with several strong assertions designed to return attention to him. One was a promise to send U.S. troops back into Iraq if he's elected. Perry said it was a huge mistake to leave that country now. Inevitably, this reminds voters of another Texas governor, who recently served as president (and invaded Iraq in the first place). It is also a position at odds with more than two-thirds of American voters' views. In fact, it is hard to think of any policy decision President Obama has made that has been more popular (except perhaps the decision to go after Osama bin Laden and kill him). So Perry was clearly prepared to roll the dice. But he wasn't rolling them on any attacks on Romney.

In one of the sharper moments of the evening, Romney turned on Jon Huntsman, calling him out for carrying Obama's water in China — failing to stop Chinese mischief. Huntsman may not have helped himself much by responding in Mandarin about starting a trade war. Romney won the exchange in the hall and probably among likely Republican primary voters too.

For his part, Paul was more intent on backing up his attacks on the conservatism of Santorum and Gingrich. His best moment came when Gingrich unspooled a lengthy apologia for his own lack of military service. Said Paul in terse rebuttal: "When I was drafted, I had a wife and two kids, and I went."

But in a sense, the man most on the hot seat Saturday night was not Romney but Santorum, the surprise co-winner in Iowa. Santorum has had the last of all the surges among the anti-Mitt contestants. And he has been campaigning the hardest the past few days to raise his third-place numbers in New Hampshire.

Santorum says we shouldn't talk about "middle class" because we don't have classes in America. It was a remarkable statement, and one that speaks to Santorum's potential as a different kind of Republican. He is not anti-union and he is not opposed to a governmental role in supporting manufacturers and U.S. jobs. He talks about his immigrant, blue collar, Catholic roots. He is trying to redefine the party to acknowledge its new base among white, working-class males who are religious and social traditionalists.

In so doing, the former senator makes his campaign meaningful in historic terms. But he is way too late to win the nomination with this thrust in this cycle unless he first finds a way to make Romney less inevitable. Just talking about Santorum is not enough.

The same is true now for all the would-be alternatives to Romney. Time is running out.