Accessibility links
Don't Get Your Hopes Up Over This Political Coverage : It's All Politics Pundits, reporters and campaigns have put a lot of energy into setting expectations for the candidates' performances. But playing the expectations game doesn't always land you on top or, for that matter, anywhere at all. 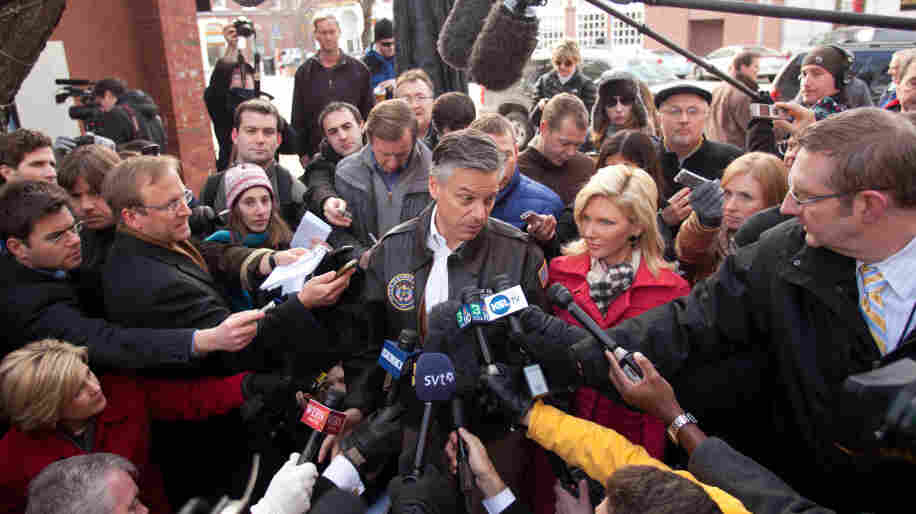 Former Utah Gov. Jon Huntsman speaks to reporters before a campaign stop in Concord, N.H. In interviews, Huntsman has said that his goal in New Hampshire is to "beat market expectations." Matthew Cavanaugh/Getty Images hide caption 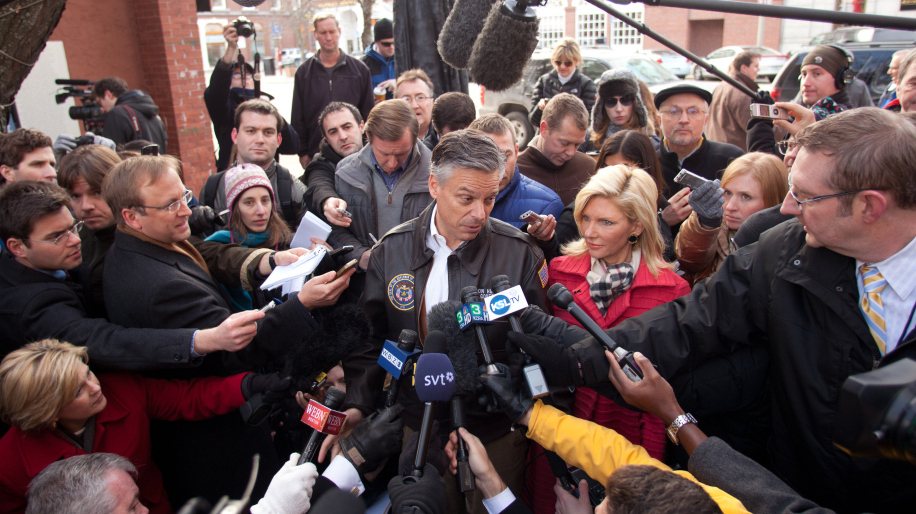 Former Utah Gov. Jon Huntsman speaks to reporters before a campaign stop in Concord, N.H. In interviews, Huntsman has said that his goal in New Hampshire is to "beat market expectations."

This may well be the worst story you've come across yet on politics.

Really, I beg you: You should have very, very low expectations for this story.

And this expectations thing is important stuff.

Pundits, reporters and the campaigns themselves have devoted a lot of energy to setting expectations for the candidates' performances.

For example, former Republican strategist Mark McKinnon told Bloomberg TV that Rick Santorum was the hot political property, coming off his close second in the Iowa caucuses to Mitt Romney. "You know, a few weeks ago ... we would have thought that a first- or second-place finish would have been huge," McKinnon said. "But the bar got raised, and Rick Santorum came out of nowhere, beating expectations."

Ah, expectations. They are invoked on every network, in every major paper and every political blog tracking what happens in this primary season. And the candidates themselves are not immune.

Last Friday, Republican candidate Jon Huntsman explicitly cited his intention to beat expectations four times in 33 seconds. This morning, he was at it again.

If only Huntsman were facing a guy named Expectations, he might actually have a chance at winning.

In N.H., Romney's Real Rival May Be Expectations

As far as what I have to offer, it's almost better just to check out Wikipedia. Seriously.

"What both candidates and journalists are trying to figure out is, 'Is one of these candidates gaining strength?' " says Jeff Greenfield, who covered presidential politics for three different television networks and is now host of PBS's Need to Know. "Is he or she performing better than we thought and particularly better than the numbers suggested a week or two ago?"

Greenfield argues that primary season expectations can create a looking-glass world where a win quickly becomes a loss — as it did for Edmund Muskie, whose weaker-than-expected win in New Hampshire in the 1972 Democratic primaries dealt his campaign a mortal blow.

"You're pulling these numbers out of your head, or another body part, and it doesn't mean anything," Greenfield says. "[Primary] voters are so much more volatile and so much less measurable than in the November general election that it's almost a fool's errand."

Earlier in his campaign, Newt Gingrich pointed to polls and boasted that he'd be the nominee. All he could muster after poor results in Iowa was the faint hope that third or fourth would be enough to rally supporters: "Remember, people in June and July said I was dead."

Candidates need to preserve their plausibility. And reporters are on a quest for some drama — especially now that the drama is quickly draining from this primary season.

But, people of America, you deserve better. You deserve something more rousing, like the call South Carolina Gov. Nikki Haley made for voters to deliver a "landslide" for Romney in New Hampshire.

It seems Haley didn't get the memo, but Ron Paul did. When Fox News' Bret Baier asked him about expectations, Paul served up a classic of the genre:

You know, or not. Hey, as long as Ron Paul finishes, he just about meets those expectations.

But all this stuff can get tricky. If you know someone is lowering expectations, does that then raise your expectations? And if a reporter like me explicitly points that out in a story like this, do all those expectations go back down again?

I'm sorry. I've made this whole thing more confusing. I really am a bad, bad reporter.