Accessibility links
'Down And Dirty,' South Carolina Has History Of Quashing Challengers : It's All Politics Ever since 1980, the state's voters have correctly chosen the eventual Republican nominee, who has invariably been the candidate the party's establishment types have chosen to rally around. It's not for nothing that it's called the South Carolina Firewall.

'Down And Dirty,' South Carolina Has History Of Quashing Challengers

'Down And Dirty,' South Carolina Has History Of Quashing Challengers 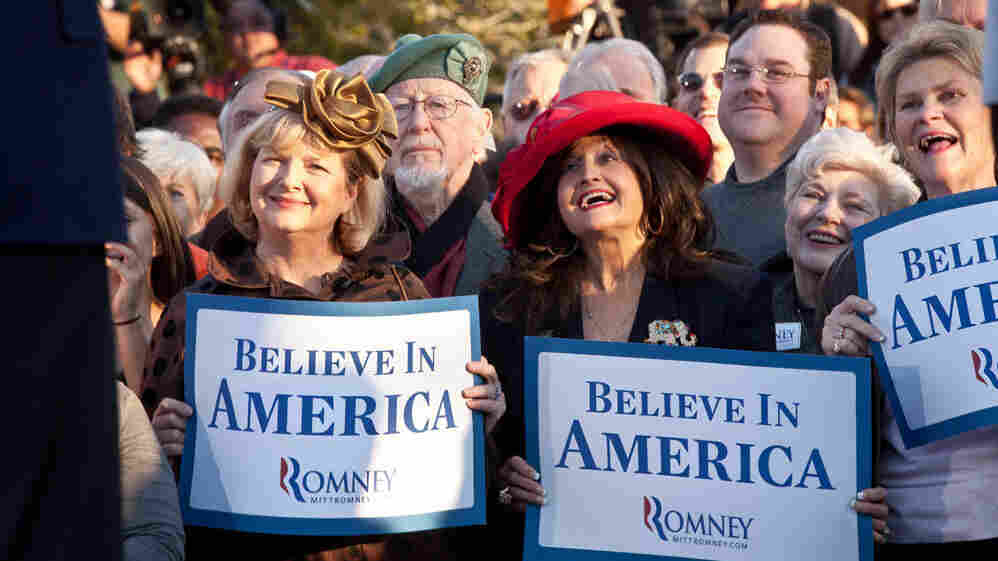 If the Palmetto State, the "First in the South" primary, plays its traditional role in the Republican presidential nomination process, it will be where the White House hopes of virtually every candidate except the eventual nominee will go to die in about 10 days.

It's not for nothing that it's called the "South Carolina Firewall." And at this moment, it's looking like it's Romney's firewall.

Ever since 1980, the state's voters have correctly chosen the eventual Republican nominee, who has invariably been the candidate the party's establishment types have chosen to rally around.

The state's primary was intended to be the place where the candidate with the imprimatur of most GOP movers and shakers could stop a surging challenger. It's meant to end candidacies that catch fire in Iowa and New Hampshire but are viewed as weak general-election prospects.

With his wins in Iowa and New Hampshire, Mitt Romney now heads to South Carolina in an enviable position. Some earlier front-runners, Bob Dole in 1996 and George W. Bush in 2000, for instance, pivoted to South Carolina after their rivals won New Hampshire — Patrick Buchanan in the former case, Sen. John McCain in the latter.

Romney, by contrast, will arrive as the first non-incumbent Republican to have won both the Iowa caucuses and the New Hampshire primary.

Romney's challengers have indicated they nevertheless plan an all-out assault on the former Massachusetts governor in South Carolina, questioning his conservative credentials in a very right-of-center state.

South Carolina is likely the last chance some of them will have to upend Romney before the contest moves to Florida, a sprawling state whose numerous media markets favor a campaign with a huge war chest like Romney's.

That growing sense of desperation on the part of some of Romney's rival campaigns, coupled with the state's reputation for vicious campaign tactics, suggests South Carolina will be a raucous, bare-knuckle affair.

It is, after all, the state where Lee Atwater, the hardball political strategist who was one of the most aggressive admen of 20th century American politics, perfected his craft.

"We have a history of being pretty down and dirty here in politics," said David Woodard, a Clemson University political science professor. "You can go back to 2000. Almost every race you can find something that was pretty unsavory about it. And so I don't think this is going to be any Sunday school picnic over here."

The 2000 presidential race, of course, featured a South Carolina whisper campaign that McCain had fathered a black baby out of wedlock. The rumor apparently mutated from the fact that McCain and his wife, Cindy, adopted a Bangladeshi child.

As a former governor of Massachusetts, the very epitome of a Yankee — who once professed views far more moderate than he claims now — Romney was bound to face serious opposition in what is a deeply conservative Southern state.

Indeed, his GOP opponents like Newt Gingrich argue that Romney isn't a reliable conservative, a serious knock in a state where Tea Party sympathies run high.

Romney also faces some resistance in a state where evangelical Christians form a large part of the electorate. In 2008, they constituted nearly 60 percent of Republican primary voters.

Not only are many of those religious voters suspicious of Romney because of his past, more moderate stands on social issues, including abortion; many also take a dim view of his Mormon faith, believing it to be a cult.

But while Romney has some vulnerabilities as his campaign decamps New Hampshire and descends on South Carolina, he also has some advantages.

Aside from having the most money, Romney also has the luxury of a deeply divided opposition. Rep. Ron Paul of Texas, Rick Santorum, Newt Gingrich, Texas Gov. Rick Perry and Jon Huntsman are all splitting the anyone-but-Romney vote, with Santorum, Gingrich and Perry particularly fracturing the conservative vote. And that opposition has little time to unify before the primary on Jan. 21.

It could be reminiscent of the 2008 South Carolina Republican primary. That's when Fred Thompson siphoned enough social-conservative voters away from Mike Huckabee, who had recently won the Iowa caucuses, to allow McCain to win. That effectively ended the most significant threat to McCain's winning the nomination.

The average of the most recent three South Carolina polls shows Romney with a 9.3 percentage point lead, a significant turnabout in a race in which he just a few weeks ago badly trailed Gingrich.

Gingrich, the former House speaker, acknowledged Tuesday that his last chance at the nomination is South Carolina. He's hoping his career as a former congressman from neighboring Georgia and an early Tea Party supporter will allow him to regain lost ground on Romney.

But Gingrich and his allies aren't leaving it at that. Along with Perry, they hope to damage Romney in South Carolina, a state with a 9.9 percent jobless rate, by charging that as the head of Bain Capital, a private-equity firm that invested in other companies, Romney bore responsibility for laying off U.S. workers.

Romney will be greeted in South Carolina when he arrives there Wednesday with a 30-minute mini-documentary called "When Mitt Came To Town."

The movie portrays the Republican front-runner as a onetime corporate predator. It's part of a relatively massive $3.4 million advertising blitz by a pro-Gingrich super PAC to stop Romney. Perry, who sidestepped New Hampshire to focus on South Carolina, has joined Gingrich in recent days to raise doubts about Romney's business past.

Romney, however, clearly has the all-important political momentum behind him as he heads south. That's an entirely different situation from four years ago when, after coming in second to McCain in New Hampshire, Romney quit campaigning early in South Carolina before the primary, eventually finishing fourth there.

Now, he looks like a winner of the sort South Carolina GOP primary voters have a track record of choosing. And that's despite the fact that he's not inspiring a lot of excitement.

"You don't see a whole lot of enthusiasm ... but I'd say [Romney's] looking pretty good," said Andy Marion, who took a few minutes to chat with me last week after the Republican club luncheon in Columbia, S.C.

Marion, a retired entrepreneur, actually likes Huntsman but thinks Romney will most likely win South Carolina. "People are for him without being jumping-up-and-down excited."