Accessibility links
The Huntsman Saga: Another Media Favorite Takes The Fall : It's All Politics The former Utah governor had a bankable blend of looks, charm, money, conservative karma and international street cred. Best of all, perhaps, was his ability to sit down with a big-time journalist and talk a good game.

The Huntsman Saga: Another Media Favorite Takes The Fall

The Huntsman Saga: Another Media Favorite Takes The Fall 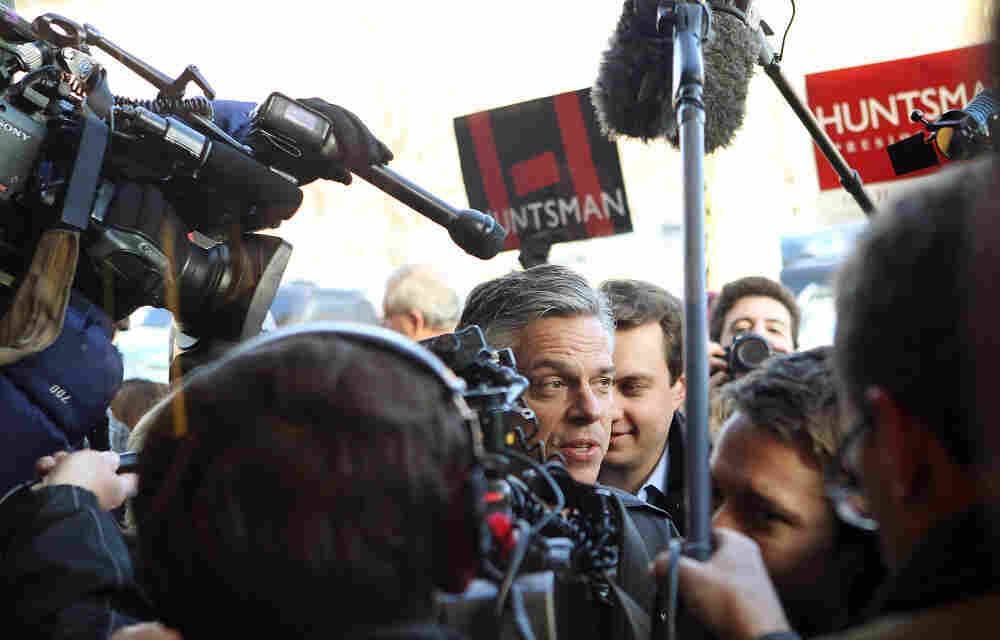 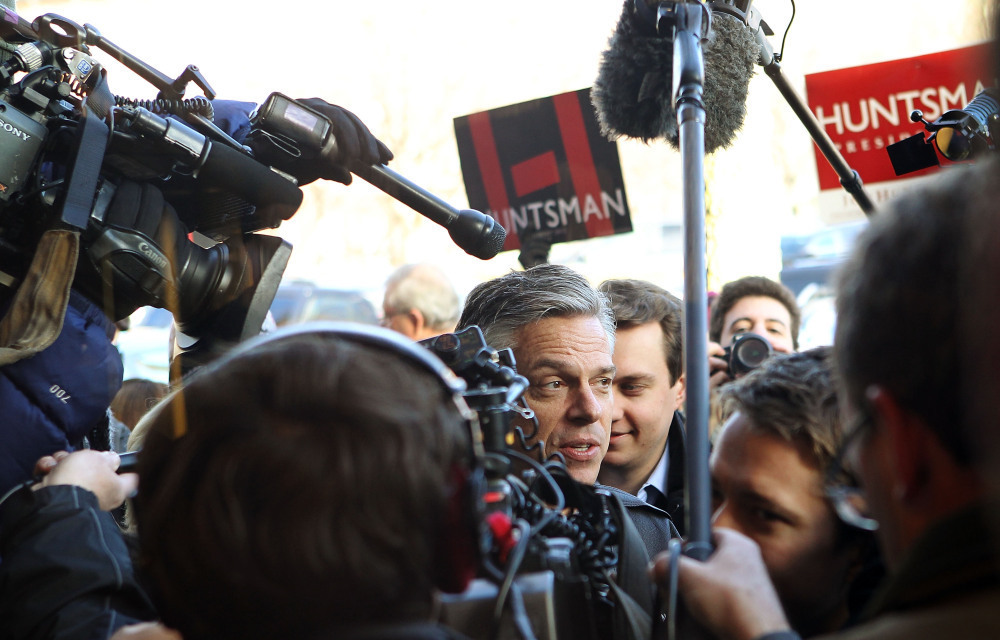 Former Utah Gov. Jon Huntsman was surrounded by members of the media during a campaign stop earlier this month in Dover, N.H.

There could not have been more apt an epitaph. The once-promising campaign of former Utah Gov. Jon Huntsman came to an end within hours of his being endorsed by The Columbia State, South Carolina's largest and most influential newspaper, within days of that state's Republican primary.

The woman who wrote the State's endorsing editorial said she felt as if she'd been wooed and won and abandoned by her newly betrothed. Indeed, over the course of his campaign, Huntsman left more than a few journalists feeling jilted.

Why? Because the former governor of Utah and ambassador to China was clearly the media darling of the 2012 Republican field — a romance that failed to include many voters. You could say it did Huntsman about as much good as it's done for others in the past.

Back in the spring of 2011, when campaign consultant John Weaver (the man who gave us John McCain) was shopping his new candidate around to his old friends, many media outlets found Huntsman a ripe subject for profile. Newspapers and magazines, broadcasters and cable channels all got in line for The Interview and the photos.

While largely unknown outside Utah and the State Department, Huntsman had a bankable blend of looks, charm, money, conservative karma and international street cred. He even spoke Mandarin. He and his family were photogenic to a fault, and he had that spark of intelligence and wit that seemed to set him apart.

Best of all, perhaps, was his ability to sit down with a big-time journalist and talk a good game. He could make people believe he really believed he would be the next president, or at least the next interesting presidential candidate. For campaign gurus and reporters alike, finding the latter can be almost as good as finding the former.

So for all these reasons, people in my business bought into the Huntsman idea, or fantasy, or whatever it was. And we overlooked what he lacked: experience, organization and a practical strategy for getting around Mitt Romney. All these mattered, but beating Romney mattered a lot.

As former governors and successful scions of famous and wealthy Mormon families, Huntsman and Romney shared too many characteristics. They were locked into the same lane. It was hard to imagine Huntsman prevailing unless Romney disappeared. And Romney, for all his faults, was not about to disappear.

Even as the GOP searched high, wide and woefully for an alternative hero, Romney motored along in his slow but steady race. He showed that he had been around the track once before, knew when to cruise and when to gun the engine.

And so Jon Huntsman is now officially the latest in a long line of Former Media Favorites who have taken the long plunge. You could even say he was right about on schedule.

Go back over the years, back to Howard Baker and John Anderson in the 1970s and to Bruce Babbitt and Paul Simon in the 1980s, to Paul Tsongas in 1992 and Richard Lugar in 1996 and Bill Bradley in 2000. All held special fascination for the political press. All seemed to have much to offer the Oval Office.

And yet all were swept away in the early primaries or soon thereafter. None could match the party's front-runners in money or charisma or issue power. And in truth, few of them ever developed the kind of connection with voters that their opponents did.

So it was with Huntsman, who could describe a scenario by which lightning might strike but could not make it happen.

Some believe Huntsman has been running for 2016, and that is surely possible. But will the Republican Party of that year look much different from the raucous, hard-line activists who thronged the Myrtle Beach Convention Center for Monday night's debate? (This crowd not only booed answers it didn't like; it booed questions it didn't like.)

A faster and more likely way for Huntsman to return to presidential politics lies in the alternative party machinations of the group called Americans Elect. Founded by a rich investor and funded by as-yet-unnamed sources, this group is working to achieve ballot access in all 50 states for this coming November.

It says it will hold a "national online convention" to choose a nominee and running mate (of different parties) to challenge the two major parties in November. Disavowing any intention to help or harm either party, Americans Elect argues it can find an electable moderate or centrist candidate who could inspire voters and beat the Democrats and Republicans alike.

They could do worse than to nominate Huntsman, a man who might well have appeal to general election voters — if he could find a way to get that far. Maybe if he could muster a second-time-around affair with the media, we might make Huntsman the return of the comeback kid. It might make a good story. Watch for it, coming soon to a screen near you.