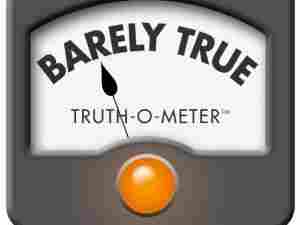 Monday's South Carolina debate had the feel of a well-traveled Broadway touring company. The cast, winnowed to five after some recent departures, had their lines memorized but included enough improv to keep the show fresh.

Some lines were borrowed from the Democrats. Newt Gingrich used one we've heard from David Axelrod, President Barack Obama's political adviser, that when Mitt Romney was governor, Massachusetts was 47th for job creation. We rated that Half True.

Ron Paul emphasized the need to reduce the American military presence overseas and noted that despite that position he still got the most contributions from people in the military. "I get twice as much money from the from the active military duties than all the other candidates put together," he said. PolitiFact Texas checked that back in July and rated it True.

Romney was critical of Obama's trade policy, saying, "This president has opened up no new markets for American goods around the world in his three years, even as European nations and China have opened up 44." We've rated that False.

Rick Santorum cited the value of marriage, a high school diploma and a job at fighting poverty. We've checked the marriage angle and gave it a Half True.

Gingrich criticized ads from a pro-Romney superPAC that claimed he co-sponsored a bill with Nancy Pelosi that supported China's one-child policy. Gingrich called it "an absurdity." We called it Pants on Fire.