Accessibility links
Will Backing Of Anti-Immigration Movement's 'Dark Lord' Haunt Romney? : It's All Politics Maybe you've never heard of Kris Kobach. But some immigration advocacy groups say an endorsement from the Kansas secretary of state is going to cost Mitt Romney the Hispanic vote and — should Romney become the Republican nominee — the general election. 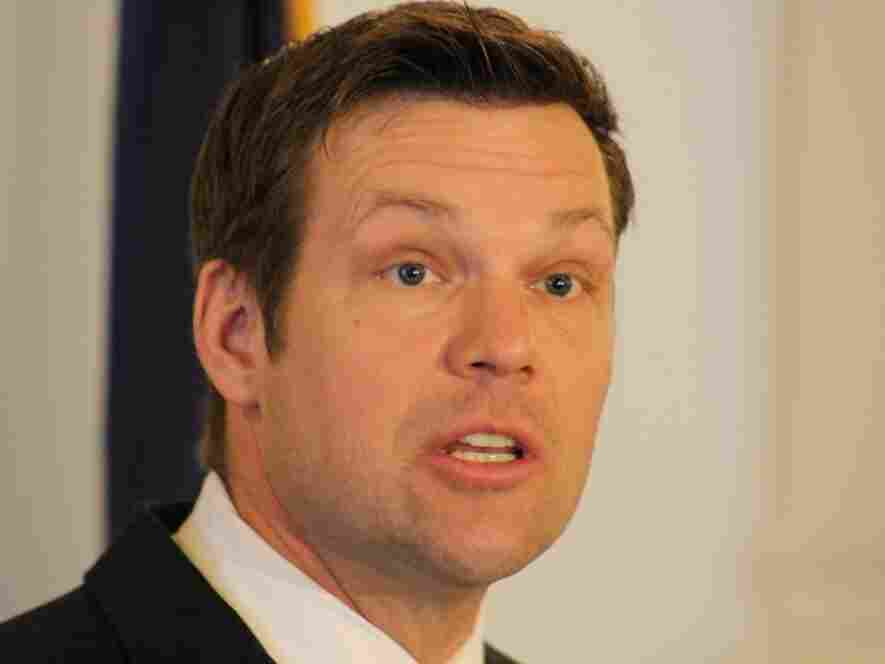 Kansas Secretary of State Kris Kobach has endorsed Mitt Romney — an endorsement that some say could be toxic to the Republican presidential candidate. John Milburn/AP hide caption 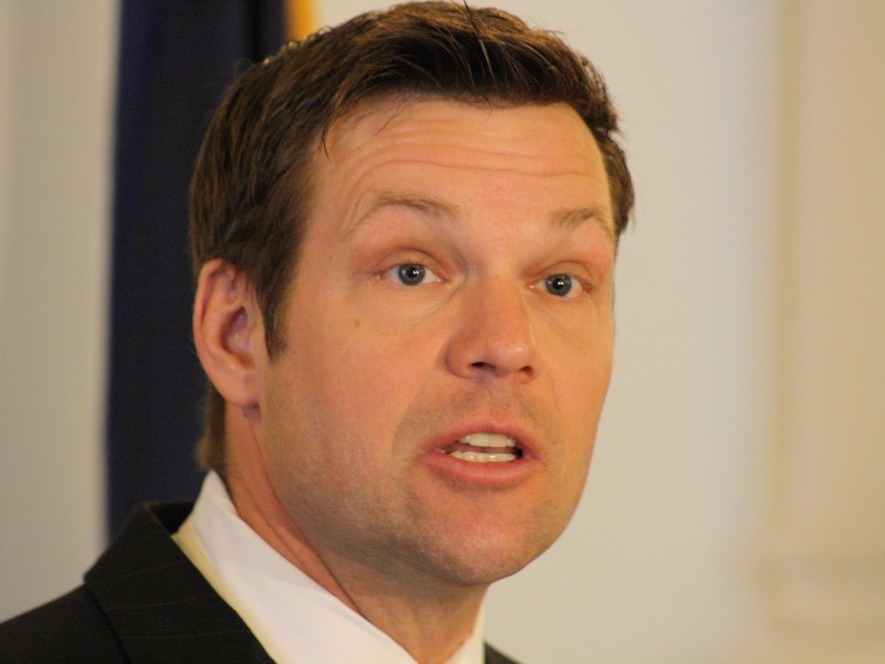 Kansas Secretary of State Kris Kobach has endorsed Mitt Romney — an endorsement that some say could be toxic to the Republican presidential candidate.

Maybe you've never heard of Kris Kobach. To hear some immigration advocacy groups tell it, however, Kobach is going to cost Mitt Romney the Hispanic vote and — should Romney become the Republican nominee — the election.

Kobach is serving as the Kansas secretary of state. He remains better known in some quarters for his work as an adviser to legislators around the country drafting immigration laws — including the 2010 Arizona law that is being reviewed by the Supreme Court this spring.

If upheld, that law will require local law enforcement officials to check the immigration status of anyone they have "reasonable suspicion" to believe is in the country illegally.

That provision remains so controversial that the liberal blogosphere and some advocacy groups are contending that Kobach's recent endorsement of Romney will prove politically toxic to the former Massachusetts governor.

Rep. Luis Gutierrez, an Illinois Democrat, called Kobach the "dark lord of the anti-immigration movement," while John Wester, the bishop of Salt Lake City's Catholic archdiocese, said he was "sad" that Romney had accepted support from such a divisive figure.

"I did not anticipate when I first started working on this issue that someday I would be seen as a hero by some and a horrible villain by others on a national scale," Kobach said during an interview in his Topeka office.

Kobach served as Romney's top immigration and border security adviser for the 2008 campaign. It's not clear whether he'll play as prominent a role during this cycle, but he did appear as a campaign surrogate in a "spin room" after a GOP debate in South Carolina.

Kobach says he knew his endorsement would largely be viewed through the prism of illegal immigration, which was the major reason he gave Romney his support.

Especially with the departure of Minnesota Rep. Michele Bachmann from the race, Romney has the most consistent record on immigration, Kobach says, including his veto as governor of a bill to provide in-state tuition rates to illegal immigrants, and his use of Massachusetts troopers to assist federal immigration authorities.

In other words, Romney will have earned the opposition of anyone who opposes him on immigration issues himself, not because of Kobach's support.

Kobach says he's been "emboldened" by the attacks. "If people are saying those horrible things about me, I'm going to push even harder," he says.

Because of Kobach's prominence in crafting immigration policy — as well as new requirements in Kansas and other states that voters show photo identification and even offer proof of citizenship — he could potentially become a useful symbol for Romney's opponents throughout the campaign.

"Certainly the Hispanic community knows the name of Kris Kobach," says Tim Owens, a Republican state senator in Kansas, "and the people of Arizona know his name."

But Kobach is not a known quantity to most Americans. And just because some groups on the other side of immigration issues view him as an opponent doesn't mean all Hispanics will sour on him and, by extension, Romney.

Indeed, a new poll suggests that Romney has a double-digit lead among likely Hispanic voters, at least in Florida.