Accessibility links
Live By Debate, Die By Debate: Gingrich Challenge To Romney Stalls Where It Began : It's All Politics From his assault on food stamps to his eviscerating of the news media, Newt Gingrich literally brought crowds to their feet during last week's debates in South Carolina. For a moment, you could almost hear the rebel yell. But Florida has been a different matter.

Live By Debate, Die By Debate: Gingrich Challenge To Romney Stalls Where It Began

Live By Debate, Die By Debate: Gingrich Challenge To Romney Stalls Where It Began 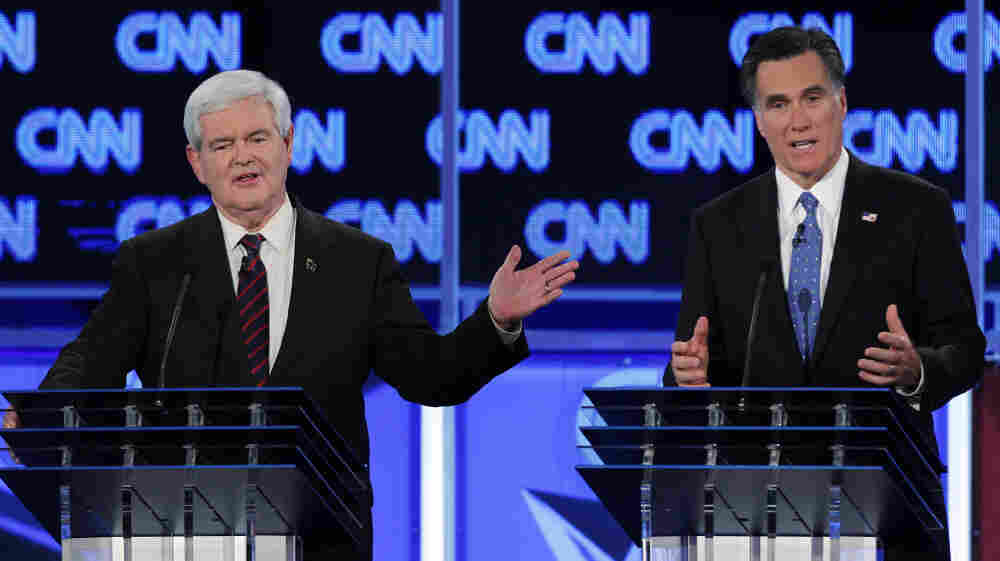 On Thursday night in Jacksonville, Fla., Mitt Romney (right) went after Newt Gingrich from the start on topics such as immigration and colonizing the moon. Matt Rourke/AP hide caption

We still don't know who'll win the Florida primary Tuesday, but after the past two debates it seems far likelier to be Mitt Romney.

Why? Because Newt Gingrich had vaulted from the margins to the forefront of the Republican presidential race in South Carolina on the strength of two debate performances. And that weapon has ceased to work in his favor.

The NBC and CNN debates this week in Tampa and Jacksonville went a long way toward neutralizing the impression created by debates the previous week in Myrtle Beach and Charleston.

Yes, you can find other reasons why South Carolina went with Gingrich on Jan. 21. The Palmetto State breeds a fundamentally different kind of Republican from that indigenous to Iowa or New Hampshire. And the state has long been inclined to stick it to the national powers that be.

But no one can doubt the importance of debates in promoting Gingrich's connection with South Carolina's core Southern conservatives. From his assault on food stamps to his eviscerating of the news media, the former House speaker literally brought the local crowd to its feet last week. For a moment, you could almost hear the rebel yell.

But the ferocity with which debate audiences embraced Gingrich in the Palmetto State has not been replicated in the Sunshine State.

One reason is that Mitt Romney looked at the debacle of those South Carolina debates and made a crucial adjustment. He brought on a new debate coach. And not just any debate coach, but Brett O'Donnell, who in recent years raised Jerry Falwell's Liberty University to the top ranks of college debate. Not just the top ranks among religious schools but the top ranks, period.

More recently, O'Donnell had advised Michele Bachmann. Say what you will of that candidacy, what life it had emanated largely from her early debate performances in the summer of 2011.

We do not know what advice O'Donnell might have imparted or how much time he might have spent reshaping Romney's debate persona.

But Romney himself was quite transformed in the Florida debates and, more important, in the televised version of those events.

On Monday night in Tampa, Romney was far more assured than he had been since the earliest debates of last year. The crowd had been silenced, and Romney took advantage of the more subdued exchange to hold his own against his more aggressive, voluble rival.

On Thursday night in Jacksonville, CNN unleashed the crowd noise again, but Romney was thoroughly prepared. He went after Gingrich from the start on the content of his rival's ads regarding immigration. Romney called the epithet of "anti-immigrant" leveled against him "repulsive" and a symptom of the politics Americans dislike.

Again and again, Romney managed to find ways to score. He rebuked the idea of a colony on the moon and said if Gingrich had worked for him and proposed such a thing, he would have fired him. He also ripped Gingrich for promising big NASA projects in Florida and other local-pandering projects in other states.

"That's the kind of thing that's gotten this country into trouble in the first place," he said.

And this time the crowd was with him.

Even when CNN's Wolf Blitzer called Romney on his ad accusing Gingrich of calling Spanish "a ghetto language," Romney managed a recovery that left the onus once more on Gingrich. "Let me just ask," he said, turning to Gingrich. "Did you say it?"

When Gingrich protested that it had been taken out of context, Romney could turn away with a smile and know he had won yet another debating point.

The hiring of an effective debate coach will not cure all the problems Romney has in connecting with voters. It is possible his high income and low tax rate will combine to undercut his standing, even in a GOP that likes wealth and low taxes. We can also wonder whether Romney will ever overcome his Massachusetts health care plan and other baggage from his years as governor of that liberal state.

But the Gingrich thrust that has most recently imperiled a Romney nomination was a wound inflicted almost exclusively in TV debates. And based on the two debates of this week, that particular thrust has now been parried. Any further deterioration in Romney's standing will have to be laid to some other, more fundamental weakness in his candidacy.