Accessibility links
Florida GOP Primary Lets Romney Show Skill In Political Knife Fight : It's All Politics One big question about Romney was whether he would be able, if he became the nominee, to stand toe-to-toe with Obama on the presidential debate stage, especially after some gaffes (think the $10,000 wager or "I'm running for office, for Pete's sake.") 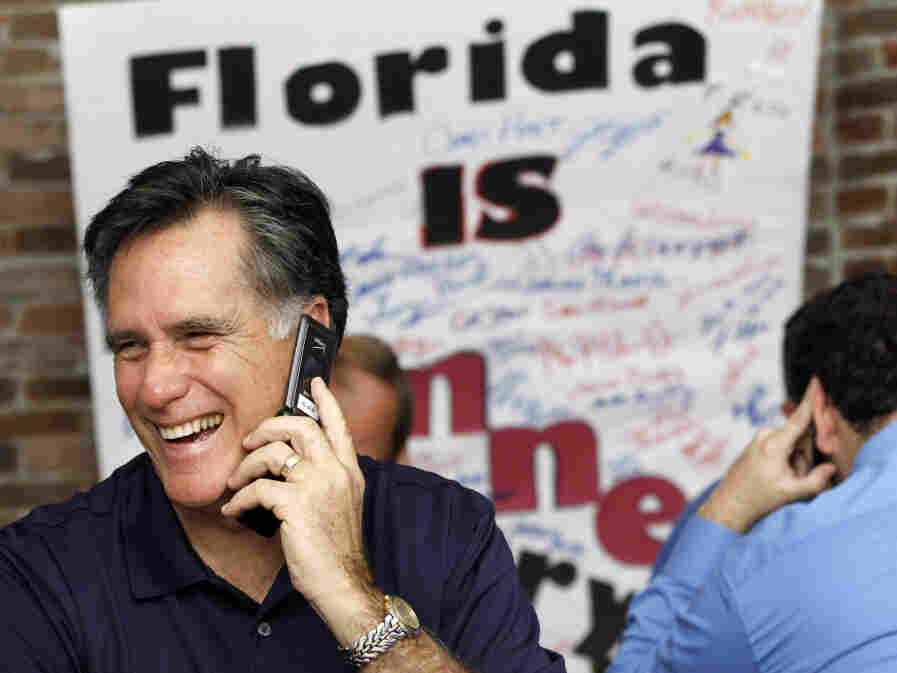 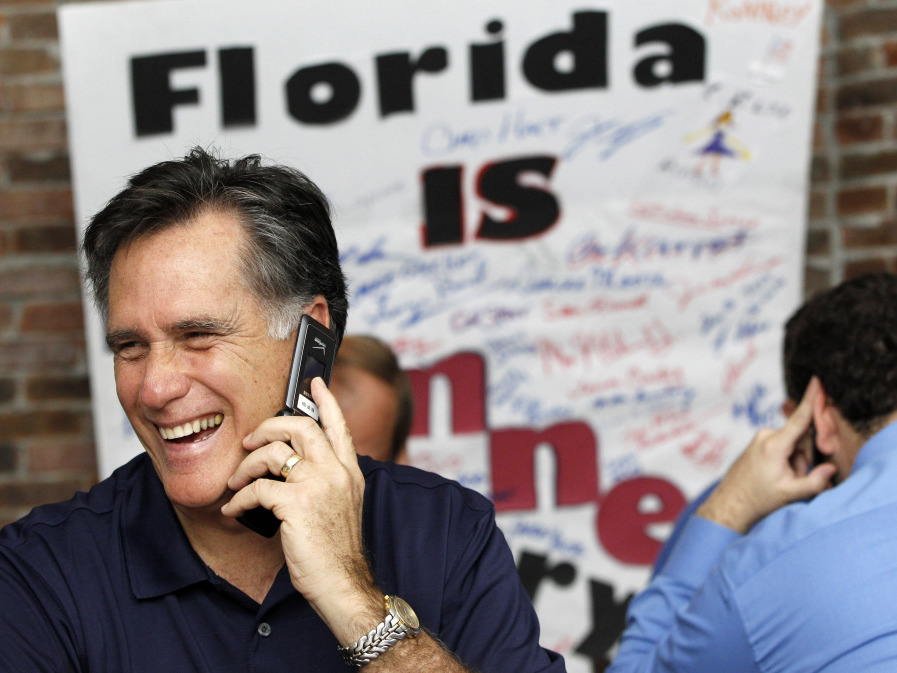 With virtually all polls giving him a solid lead among Florida's Republican voters, Mitt Romney is expected to handily win the Sunshine State's GOP primary Tuesday, putting him back on course for his party's presidential nomination.

Not that the contest is over. Newt Gingrich, Rep. Ron Paul and Rick Santorum have vowed to keep fighting, with the former speaker promising to stay in all the way to the Republican convention this summer, and the Texas congressman expected to go at least that far as well.

But Romney does appear to be gliding toward the kind of victory in Florida, the largest and most demographically varied state yet, that should rehab a candidacy whose aura of inevitability was badly dinged by Gingrich's resounding South Carolina primary victory.

Still, Romney's problem remains that many Republicans clearly would rather he not be their party's standard-bearer in November against President Obama. While the Real Clear Politics average for Romney's support is 41.8 percent, a majority of Florida Republicans — 52.1 percent — collectively support Gingrich, Santorum and Paul.

However, anti-Romney Republicans holding out for someone else to be the nominee, either one of his current rivals or someone who would jump in the race late, are likely going to have to come to terms with Romney being the nominee.

Josh Putnam, a political scientist at Davidson College who blogs at Frontloading HQ, examined the question of whether someone who isn't in the race now could enter and possibly win the nomination, given the deadlines, and determines that the candidate field Republicans see now is pretty much the extent of their choices. Putnam writes:

"Who is the candidate who can not only successfully enter the race late, but who can also marshal the organization necessary to cobble together enough delegates to take the nomination or throw enough of a monkeywrench into the process and still maintain support in the party to win the nomination at the convention? Let's think about this for a moment. There are people in this race now actively seeking the nomination (and who have been running for president for quite some time) who cannot get on the ballots in some states. And we are expecting someone to come in and immediately be able to beat these deadlines, organize write-in efforts and uncommitted slates of delegates to get within shouting distance of 1144 or a lower total held by the frontrunner.

Which gets us back to Romney. One of the big questions about Romney was whether he would be able, if he became the nominee, to stand toe-to-toe with Obama on the presidential debate stage, especially after some gaffes (think the $10,000 wager or "I'm running for office, for Pete's sake.") Could he handle himself in a political knife fight especially against the combative Gingrich?

Romney's performance against Gingrich in the Florida debates in which he pummeled the former speaker, seeming to at times leave him apoplectic, proved that Romney, when he is prepared, can more than hold his own against a formidable debater.

Gingrich had repeatedly made a case for his getting the nomination based on his supposed debating prowess and greater adherence to conservatism. That would make him the bigger threat to Obama during the fall debates.

But with his Florida debate performances, Romney knocked the legs out from under that argument, then essentially mocked Gingrich afterwards, more proof that he may have the kind of hard edge many Republicans have wanted in whoever eventually takes on Obama.

And as though that weren't proof enough of Romney's will to win, Romney and his superPAC allies unleashed a torrent of negative ads in Florida, in a race in which more than 9 out of 10 of the ads on TV and cable were negative. Of course, not all were pro-Romney but many were.

Writing in The Daily Beast, John Avlon quotes president of Kantar Media CMAG, which tracks political advertising, as saying the level of negative ads leading into the Florida primary has been unprecedented.

" 'For as long as I've been in politics, 14 years, journalists call me and ask if this is the most negative election ad atmosphere I've ever seen,' says Kenneth Goldstein, president of Kantar Media CMAG, which tracks content and targeting of political advertising. 'And every year I say, Don't be ridiculous.'

" 'But this year it's true. This primary season is the most negative it's ever been,' asserts Goldstein. 'I have absolutely never seen television advertising so negative in a Republican presidential primary.' "

So it would seem that the crucible of this year's Florida presidential primary should have gone a long way to erase many of the doubts in Republican minds about Romney's willingness to do what it takes to win not just the nomination but the White House.

Whether that will be enough for him to consolidate more support within his party remains to be seen.

By the way, Micah Cohen, writing for the FiveThirtyEight blog, provides a very useful understanding of Florida's political landscape. For those watching the returns from Florida on Tuesday night who want to get an early feel for how the evening will end, he suggests focusing on the I-4 corridor in central Florida. Cohen writes:

"The I-4 Corridor is usually a swing area in primaries and general elections and is considered the state's bellwether. It might be possible to win Florida without winning the I-4 corridor, but it would not be easy. Indeed, if Mr. Romney is running up large margins in counties in the Tampa area (which usually are among the first to report their results), then it may be an early night for politicos."