Accessibility links
Campaigns Embrace Twitter: Who Let The Snark Out? : It's All Politics Twitter has become the latest medium for campaign spin. It's a stream of barbs over debates, crowd estimates and ad wars. And even the candidates' dogs are not off-limits. 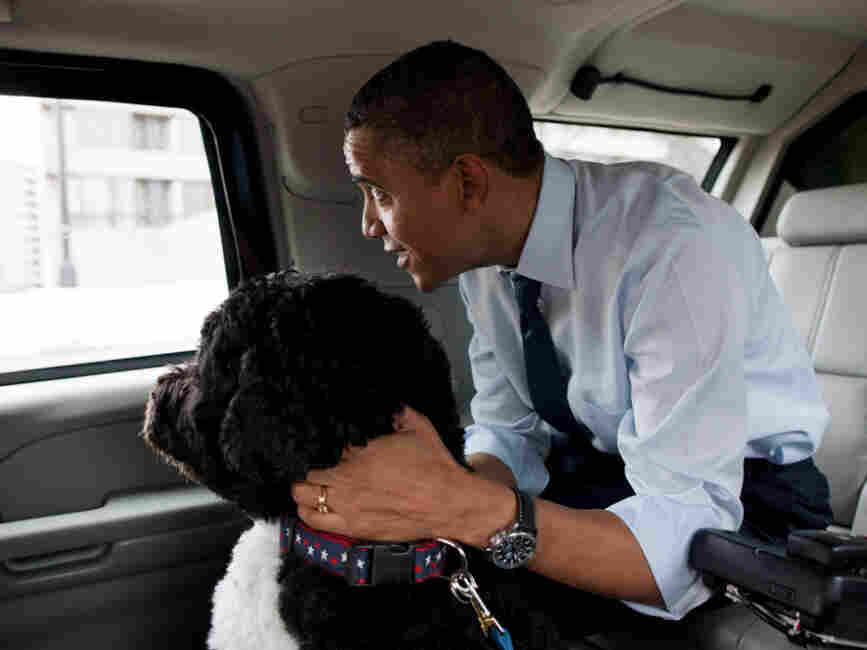 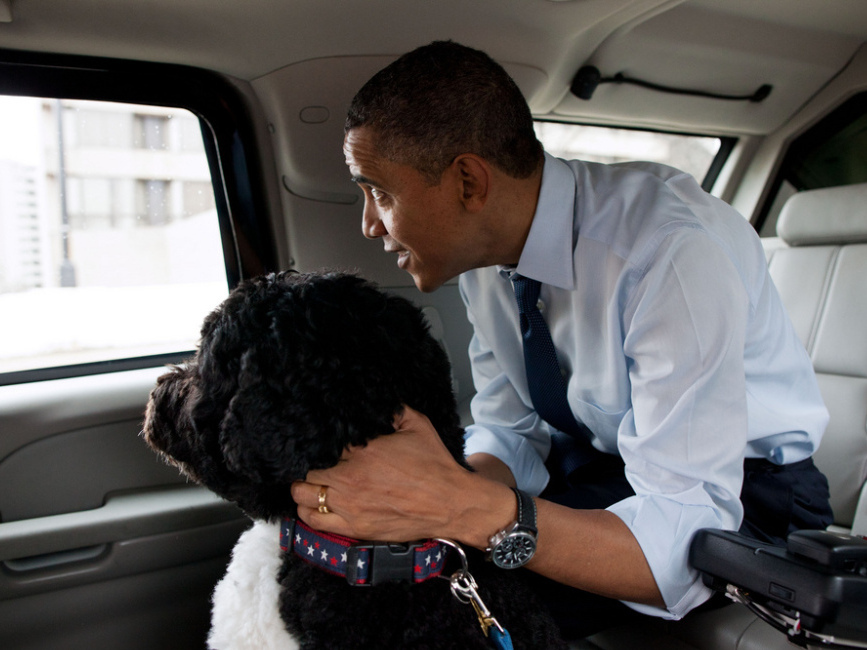 President Obama traveled in the presidential limo with his dog, Bo. Adviser David Axelrod tweeted this photo from the White House Flickr account to tweak the Romney campaign.

O, for the love of Fido. In the messaging wars between presidential campaigns, there's no hiding the women (Newt Gingrich's ex-wife) or the children (as school janitors), and now not even the pets.

On Monday, top Obama campaign adviser David Axelrod needled Mitt Romney for his infamous past mishap with his family dog by tweeting a photo of Obama riding in the presidential limousine with the first dog, Bo.

First, the oft-recounted tale of Romney and his Irish setter, Seamus: Packing the car for a family vacation back in 1983, Romney loaded Seamus in a portable kennel and strapped him to the roof for a 12-hour drive to Canada. Seamus' tummy didn't appreciate the ride, and the dog succumbed to diarrhea. Romney pulled into a gas station, hosed off the dog, kennel and car, and put the dog back on top of the car and finished the trip.

Though family members had recounted the story as proof of Romney's pragmatism, critics used it to call him emotionless and out of touch. Now the Seamus story is back, as fodder for opponents in both parties. New York Times columnist Gail Collins has vowed to mention the incident in every column about Romney.

In Axelrod's tweet, the photo shows Obama seated and patting Bo, as they both look out the car window. Axelrod writes, "How loving owners transport their dogs."

Axelrod also has Romney's GOP opponent Newt Gingrich to thank for the inspiration. Earlier this month, the Gingrich campaign released a scathing Web ad of Romney gaffes that includes the dog mishap. The ad shows Fox News' Chris Wallace asking Romney, "What were you thinking?"

The barking continues. New anti-Romney Web sites have appeared, such as Dogs Against Romney. ("I ride inside," spokesdog "Rusty" claims.) And Facebook now has a Pet Lovers for Obama page.

Twitter has become a battleground of barbs traded between the campaigns. An infrequent tweeter, having sent about 250 dispatches, Axelrod has amassed more than 53,000 followers.

He's saved much of his powder for shots at Romney, like this one from Jan. 4 following Rick Santorum's surprisingly strong finish in the Iowa caucuses: "The sound Santorum is hearing right now is not the buzz of victory. It's the whirring of the Romney Super PAC, preparing to carpet bomb him."

Axelrod has also engaged in a heated tweet-for-tweet with Romney adviser Eric Fehrnstrom. At one point, he tweeted on Jan. 24, in between the two Florida debates: "@EricFehrn last time we did this, you missed debate prep and your guy tanked. I don't want to distract you. You have your hands full."

The Romney camp is no different. On Monday, Fehrnstrom delivered a snarky reply to a reporter's tweet from a Gingrich campaign stop in Florida: "[Gingrich will be] Speaking to empty chairs?"

Later on Monday, Fehrnstrom aimed to show Romney had no such problems in his own Florida stop: "Crowds are getting bigger for Romney. This is from Naples, happening now," he tweeted, attaching a photo.

Not satisfied, he then tweeted: "Wish I had panorama camera. Only way to do justice to size of Romney crowd." Finally, he posted: "Here's a better picture of Romney's Dunedin crowd that does it justice," with this photo.