Accessibility links
Why Romney's Shaggy Dog Story Won't Die : It's All Politics Will the tale about Mitt Romney strapping the family Irish setter to the roof of his car actually hurt him with voters? 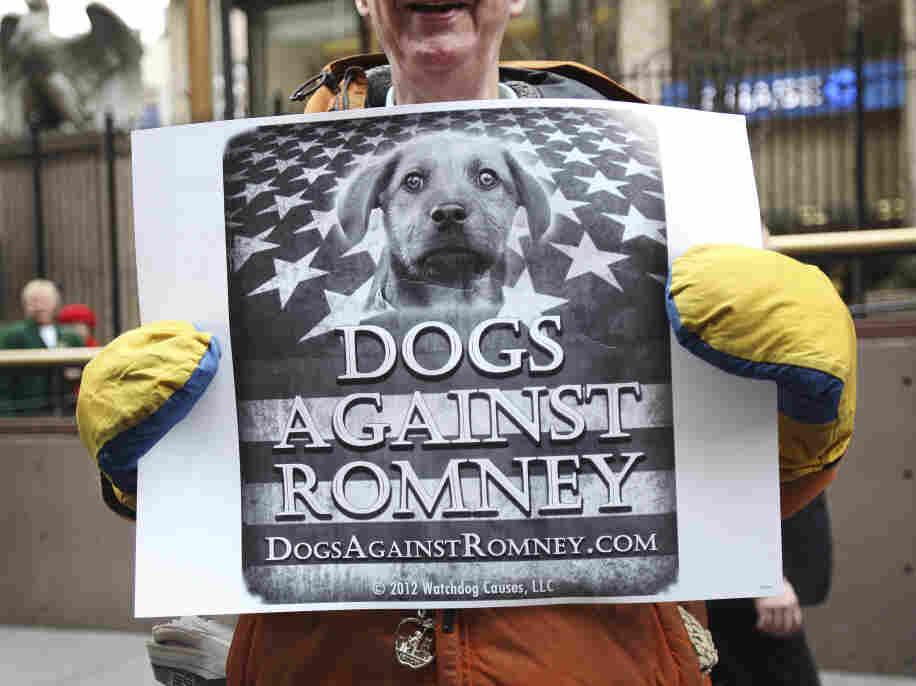 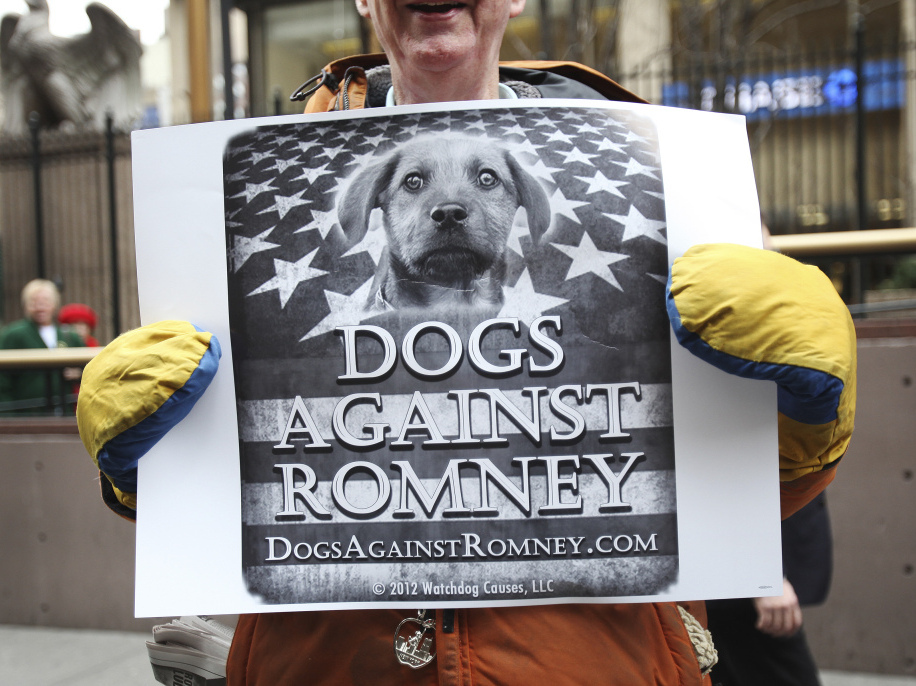 A man holds a sign during a "Dogs Against Romney" demonstration outside the 136th Westminster Kennel Club Dog Show at New York's Madison Square Garden, on Tuesday.

It's the story that continues to, well, dog Republican presidential front-runner Mitt Romney. And, according to some experts, it could jeopardize his standing with voters who care about animals. And yes, it turns out, that is not an insignificant voting bloc.

The incident happened back in 1983, and it's been public since 2007. But it seems that only now a critical mass of voters is hearing it for the first time.

The dog story was told by a Romney son and published by The Boston Globe as part of a multipart series on the former Massachusetts governor. The anecdote was intended to highlight his problem-solving skills.

It seems that during a 12-hour car ride from Massachusetts to Canada back in 1983, there wasn't enough room in the family station wagon for the five Romney sons as well as Seamus, the Irish setter. So Romney put the dog in a crate on the roof instead. "He'd built a windshield for the carrier, to make the ride more comfortable for the dog," according to the story.

But what has really outraged dog lovers is what happened next, according to the story, when the first sign of trouble was spotted by oldest son Tagg. "'Dad!' he yelled. 'Gross!' A brown liquid was dripping down the back window, payback from an Irish setter who'd been riding on the roof in the wind for hours," the now infamous story reads.

At that point, Romney pulled into a gas station, borrowed a hose, washed down both the dog and the car, returned the dog to the roof, and the family continued on its way.

Among those who professed shock at the story was Fox News host Chris Wallace. "I have a yellow lab named Winston. I would no sooner put him in a kennel on the roof of my car than I would one of my children. Question: What were you thinking?" Wallace asked the former governor.

Replied Romney with a nervous laugh, "This is a completely airtight kennel, mounted on the top of our car. He climbed up there regularly, enjoyed himself, he was in a kennel at home a great deal of the time as well. We loved the dog, it was where he was comfortable and we had five kids inside the car and my guess is he liked it a lot better in his kennel than he would have liked it inside."

That was Romney's explanation in 2007. Flash forward to 2012, however, and the story is back with a vengeance. Partly thanks to New York Times columnist Gail Collins, who has kept the story alive in her columns, a small band of protesters has been following Romney around at campaign stops with stuffed dogs in crates attached to the roofs of their cars. One was even pulled over by Colorado police recently on suspicion of animal cruelty.

All of this has been chronicled with a hint of a smile by Scott Crider, a social media specialist from Gulf Shores, Ala., who founded the blog Dogs Against Romney.

But Crider, whose blog today has received millions of hits and sells bumper stickers and T-shirts with catchy slogans like "Mitt Is Mean" and "I Ride Inside," says he wasn't smiling when was moved to start the blog back in 2007.

"I just thought that [part about washing down the dog and putting it back on the roof] was particularly cold," he said. Crider said he and his wife, who now helps him with the blog, "both feel that this just speaks to this guy's character."

Crider says he's still surprised at how many people have not yet heard the story. "Every day about five or six people on the Facebook page write 'WHAT?' in all caps," he says. "People that were previously leaning toward supporting Mitt Romney and it totally makes up their mind that they just can't support this guy."

At a recent pet expo at the Maryland State fairgrounds, most of those who had heard the story had pretty much the same reaction.

"How could you do that to a dog?" said Ray DeMaris, who brought his golden retriever, Ripley, from New Hampshire to compete in the agility competition. "I just can't think of anybody doing that."

"If you're going to treat your animal that way, what do you think of people?" said Janice Gianforte, who was at the expo selling pet nutrition supplements.

Not everyone was convinced that how Romney treated Seamus is an example of how he'd act as president. "I don't know whether I'd vote for him or not, but I don't think that would be an issue," said T-shirt vendor Kevin Crocker.

But Romney's opponents clearly see the story as a potential weakness. Newt Gingrich used Seamus in one of his attack ads against Romney, and has launched a "Pets with Newt2012" Web page.

And David Axelrod, President Obama's campaign communications director, recently tweeted a picture of first dog Bo riding inside the presidential limousine with the president and the caption "how loving owners transport their pets."

"Two-thirds of American households have pets," he said. "And the pet care industry is a $51 billion a year industry. That's more than movies, recorded music and video games combined."

At the same time, he adds, "there are more than 20,000 animal protection groups in the U.S.," that support local animal shelters or wildlife or breed rescues. "And they collectively raise about $2 billion a year. It's an incredible expression of philanthropy from people who care about animals and want to see them protected from harm."

And many of them won't vote for someone who they perceive mistreated his dog, regardless of party. About the only good news for Romney and his dog story? Last year President Obama got only a C minus from the Humane Society for his work helping animals.

Rovner, who usually covers health care for NPR, is also the proud owner of a Pembroke Welsh Corgi.