Accessibility links
Obama's Manufacturing Push Meets Skepticism From Experts : It's All Politics Obama has proposed using the tax code to create incentives for manufacturers to create jobs in the U.S. rather than abroad. Rick Santorum, who is running for the Republican presidential nomination, has also proposed tax-based incentives for manufacturers. But it's worth noting that some economists see risks in politicians and other policymakers making such a big fuss over manufacturing. 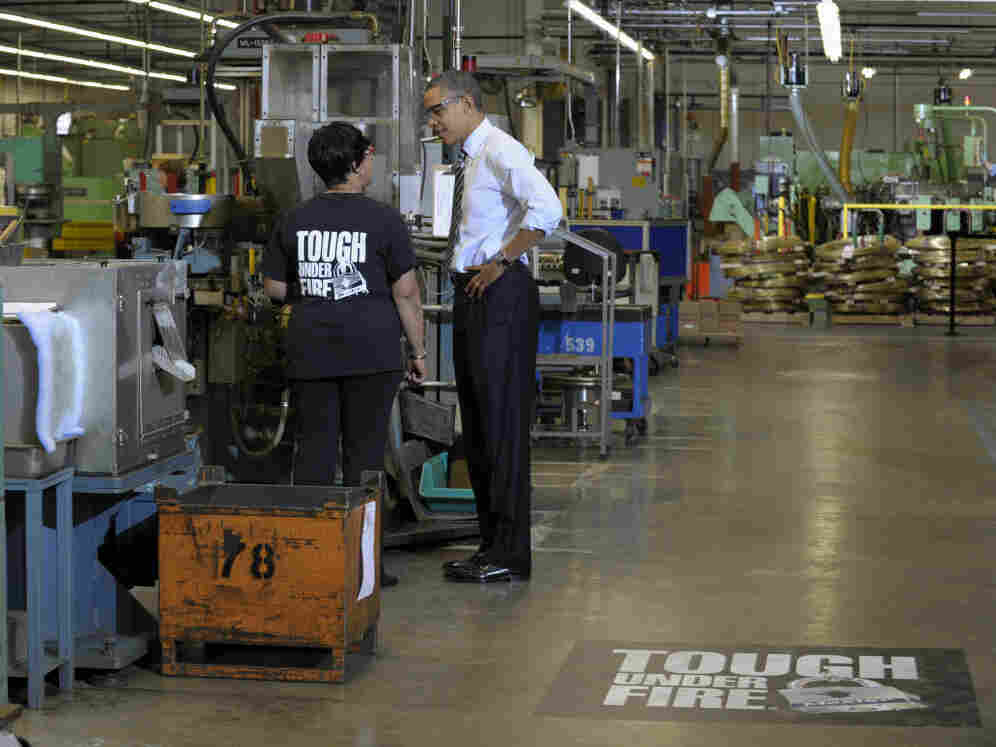 President Obama extolled U.S. manufacturing at Master Lock in Milwaukee as some experts said a return to the nation's industrial past may not be the best path forward. Susan Walsh/AP hide caption 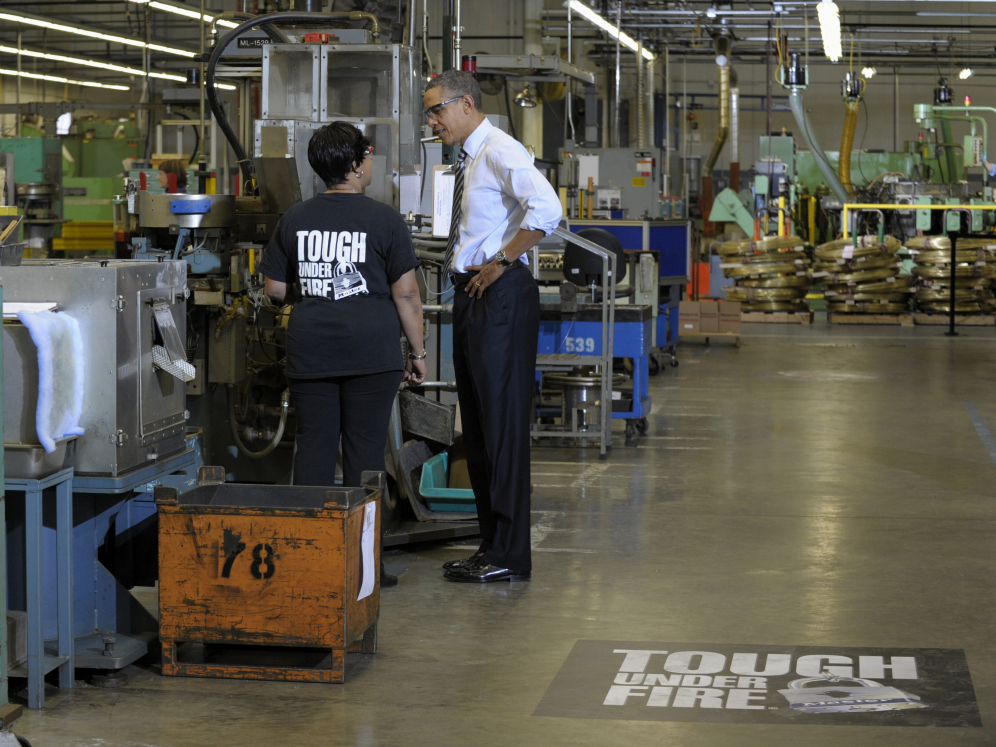 President Obama extolled U.S. manufacturing at Master Lock in Milwaukee as some experts said a return to the nation's industrial past may not be the best path forward.

Manufacturing is as American as motherhood, baseball and apple pie. Who could be against Americans making more of what they consume and exporting more to the rest of the world?

Which is why President Obama was hardly taking a political risk Wednesday by going to a Master Lock factory in Milwaukee and extolling the company for repatriating manufacturing jobs from China.

"Today you're selling products directly to customers in China, stamped with those words "Made in America." (Cheers, applause.) And the good news is, this is starting to happen around the country. For the first time since 1990s, American manufacturers are creating new jobs. That's good for the companies, but it's also good up and down the supply chain, because if you're making this stuff here, that means that there are producers and suppliers in and around the area who have a better chance of selling stuff here. It means the restaurant close by suddenly has more customers. Everybody benefits when manufacturing is going strong.

That's music to the ears of many voters in swing states with large populations of blue-collar workers and sizable manufacturing sectors, like Wisconsin, Ohio and Michigan, for instance.

Obama has proposed using the tax code to place incentives in front of manufacturers that create factory jobs in the U.S. rather than abroad. Rick Santorum, who is running for the Republican presidential nomination, has also proposed tax-based incentives for manufacturers.

But it's worth noting that some economists see risks in politicians and other policymakers focusing so much on manufacturing.

As Scott Horsley reported on Morning Edition Wednesday, one of those skeptics is Christina Roemer who for a while headed Obama's Council of Economic Advisers.

An excerpt from Scott's report:

SCOTT: ... "Romer... says since factory jobs are no longer a gateway for unskilled workers to the middle class, they may not deserve special treatment from the government.

CHRISTINA ROMER: "I don't think any of us know sort of what the future of the American economy is. I think we have to be careful not to hold onto sort of this idea that it was good in the past. It must be, you know, what's going to be good in the future."

That view was seconded and expanded on by Jeffrey Bergstrand, an economist at the University of Notre Dame, said in a comment distributed by the university. Of what is being called "factory nostalgia" by some, he said:

"It's an understandable sentiment, but probably not a realist(ic) economic plan. Further, the future of manufacturing in America is far different from the heavy, assembly-line operations of the past, and this has vast implications for the country's worsening education gap.

"The romance associated with it is actually economically legitimate because it reminds us of the period of the greatest growth that we had in the U.S. economy which is basically 1950 to 1973, that 23 year period.

"And that was a period where we had the fastest growth and real income, something we have not seen for the last now 40 years. It's also, at the same time, an association with the boom in the middle class..

"... What I see it as is a slowing down of the rate of loss of (U.S.) manufacturing, almost a stabilization of the decline of manufacturing in this country. The last 25 years, 30 years, companies would be heavily going into China because it was much less costly in labor to produce product, plus this is an enormous market, so it simply made sense. But the subsequent (per) capita income growth has meant a rise in the relative price of their labor, and so the differential has been alleviated.

"Once that differential alleviates and diminishes, the rate of manufacturing decline has to slow down...

"There's a significant problem associated with that, though, which is that the widening gap in educational access in this country is a very serious problem for us to maintain our lead or our status in high technology in manufacturing. That gap in education is more serious for high technology manufacturing than it is for services. And that's a serious problem we're facing..."