Accessibility links
Santorum's Problem With Women Could Be His Glass Ceiling : It's All Politics Attracting the votes of women was already the No. 1 affliction for the Republican Party in 2012. Nominating a candidate who personifies the gender gap in American politics is not a likely antidote.

Santorum's Problem With Women Could Be His Glass Ceiling

Santorum's Problem With Women Could Be His Glass Ceiling 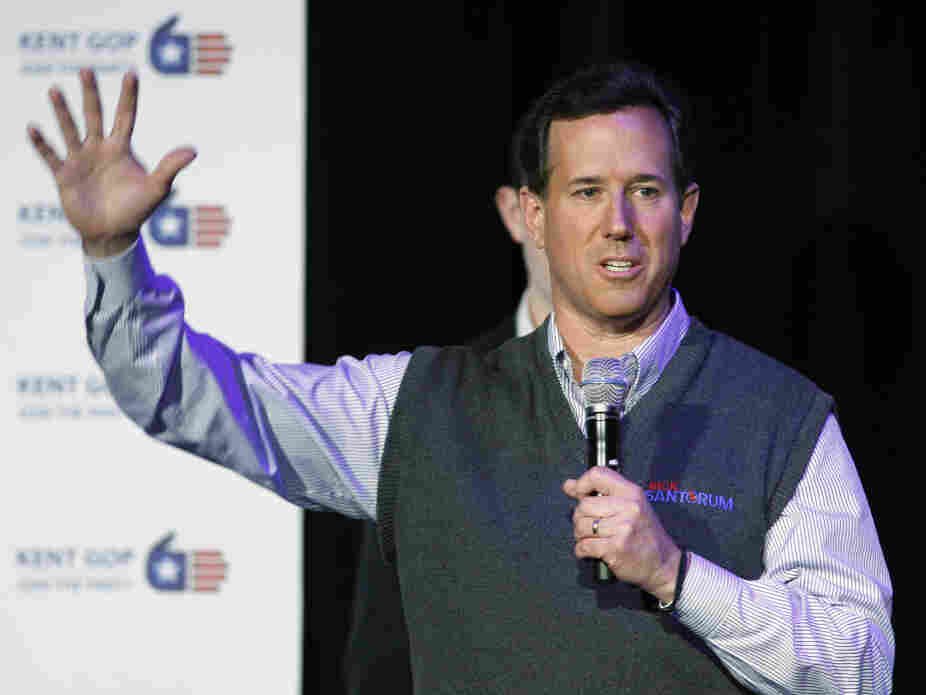 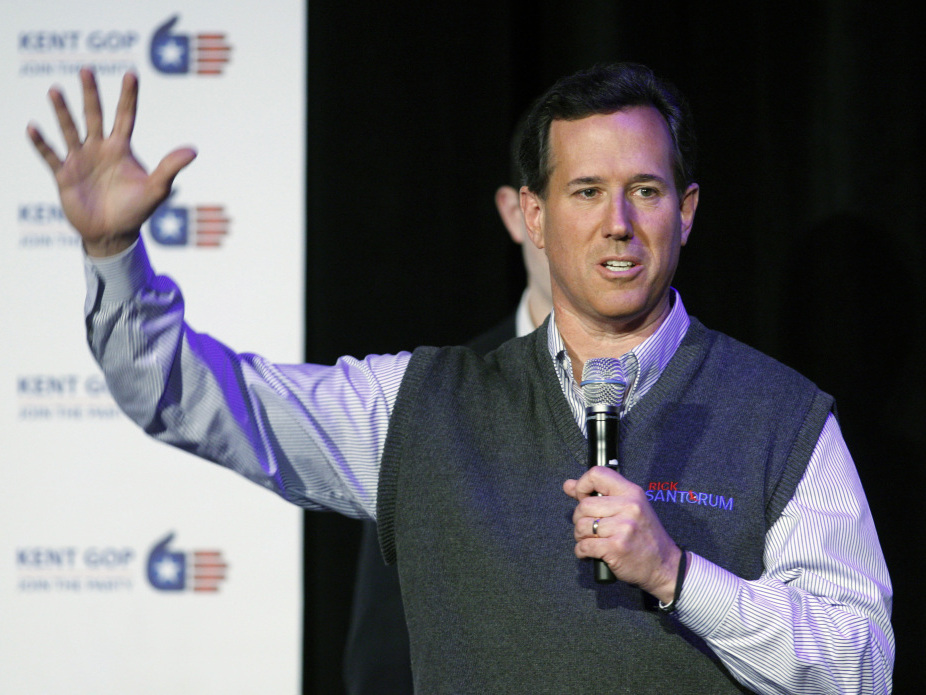 As February began, Rick Santorum's presidential bid was polling in the mid-teens among Republicans. Now, we find ourselves two weeks deep in the Santorum Era. His national polling number has doubled since he won the Trifecta Tuesday events in Colorado, Minnesota and Missouri.

Those were small contests with few participants and zero delegates at stake. But Santorum threatens to win far larger and more meaningful tests in Michigan and Arizona a week from now, and in Ohio a week after that.

If he does, he will close out Mitt Romney's claims of inevitability and unite the party factions that have searched for months for an alternative to the man from Massachusetts.

That feat has eluded all the other Romney rivals who have had brief moments atop the polls. In this, the most topsy-turvy primary season since polling began, we have seen Rick Perry, Herman Cain and Newt Gingrich all peak and fade. At this point, Gingrich is the only one of them left in the race, and his star has fallen so fast that the panic he briefly caused the establishment has passed.

The establishment must now cast a wary eye on the former senator from Pennsylvania, whom voters there rejected in 2006 by 18 percentage points. Party pros watch as Santorum doubles down on his statements regarding social issues from education and the environment to abortion and contraception. They wince as he speaks of the president's "phony theology ... not based on the Bible," and his spokeswoman alludes to "radical Islamic policies."

But the new front-runner's words should not be what worries Republicans most — Santorum's biggest problem lies in his numbers.

He might well win the Republican nomination if he remains the hero of the Tea Party and the social conservatives who include many white evangelicals and traditional Catholics.

Attracting the votes of women was already the No. 1 affliction for the GOP in 2012. Nominating a candidate who personifies the gender gap in American politics is not a likely antidote.

Four years ago, John McCain of Arizona had trouble with several categories of voters: people younger than 30, people of color and women. But women mattered most because women cast a majority of the total vote.

That's right. In 2008, women cast nearly 8 million more votes than men did: 53 percent of the total. And that was a big problem for McCain because he got only 43 percent of the female majority.

To counter that deficit, he would have needed a big majority of the men, bigger than the 55 percent George W. Bush had among men in 2004. He would have needed to be in the neighborhood of the first President Bush's showing among women in 1988: Bush beat Michael Dukakis that year by a single percentage point among women, but ran away with the men's vote by 16.

McCain fell far short of those marks. Instead, he narrowly lost to Barack Obama among men, finishing with just under 49 percent.

Let's remember that McCain could boast the first female running mate in GOP history: Sarah Palin. He was a hawk on the wars and an opponent of abortion, but so was George W. Bush when he got 48 percent of women's votes in 2004 with Dick Cheney as his running mate.

Where would Santorum fall on this scale?

It is possible he might name a woman as his running mate. New Mexico Gov. Susana Martinez has been mentioned as one possibility, particularly given the swing state she represents and her appeal to Hispanic voters.

But Santorum also would face a powerful headwind because of his positions, longstanding and often repeated, on hot-button issues among women. While he has done well among women who turn out for GOP primaries and caucuses, the November electorate will include far larger numbers of independents, Democrats and Republican women who were not active in the nominating contests.

Santorum will have a problem on abortion, not because he is anti-abortion (as all the Republican candidates are) but because he gives the issue a pre-eminence in his array of causes that makes many Americans uncomfortable. The same could be said for his virulent opposition to gay marriage and to women's current and proposed role in the military.

But his crusade for the restoration of traditional mores goes further. Santorum says he would not ban contraception, but he opposes it. The overwhelming majority of American women use or have used contraception and want access to it. Santorum also opposes the inclusion of prenatal testing in insurance plans, arguing that too many prenatal tests lead to abortions. He also has been outspoken on public schools, calling them "factories" and choosing to home school his own seven children. His disapproval of women working outside the home when their children are young is also well known.

Many of these issues have been regarded as settled law or settled politics for a generation. The notion that they are to be reopened and revised disturbs many women, including many who do not consider themselves liberals. Such women may not prevail — or even participate — in Republican caucuses and primaries, but their votes will be crucial to the GOP in November.

So what happens if Santorum is nominated and does worse among women than McCain did in 2008? In all likelihood, defeat happens.

The last Republican nominee to fall below 43 percent of the female vote was Bob Dole, who despite the bolstering support of his wife, Elizabeth, got just 38 percent of women's votes against Bill Clinton in 1996. That was just about what George H.W. Bush got in 1992 in his loss to Clinton. In fairness to both Dole and Bush, their numbers were lower because of the third-party challenge of H. Ross Perot, who got 17 percent of women's votes in 1992 and 7 percent in 1996.

This year, if women again cast most of the ballots as they have been doing now for several cycles, a candidate who got 40 percent or less of their vote would need to exceed 60 percent of men's votes in order to win. The only candidate in either party to do that in recent history was Ronald Reagan, who got 62 percent of men's votes in his 49-state landslide in 1984. (Reagan, it is important to note, got 62 percent among men while also getting 56 percent among women.)

It is hard to imagine anyone exceeding 60 percent among men and only 40 percent or less among women. Such a gender gap of 20 percentage points or more would be twice the largest gender gaps we have seen to date.

That history sets the bar imposingly high for the former senator from Pennsylvania, should he become the nominee of his party.