Accessibility links
Santorum Spends Debate Fighting Off Attacks From Romney, Paul : It's All Politics Romney was successful in painting Santorum as an intimate part of an unpopular Congress. The former Pennsylvania senator, who found himself center stage for the first time, was on the defensive all night. 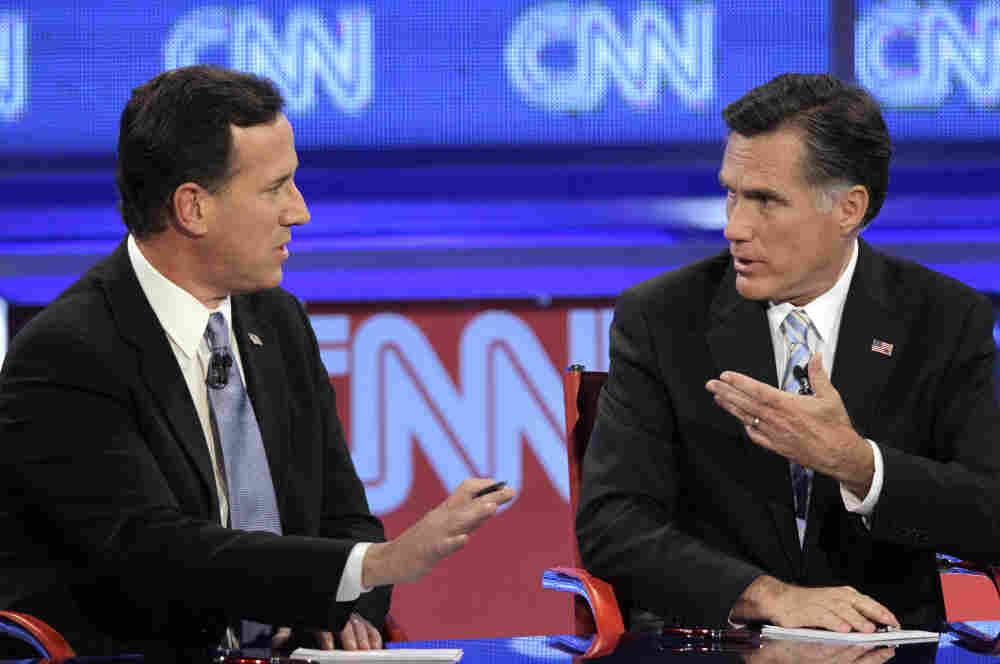 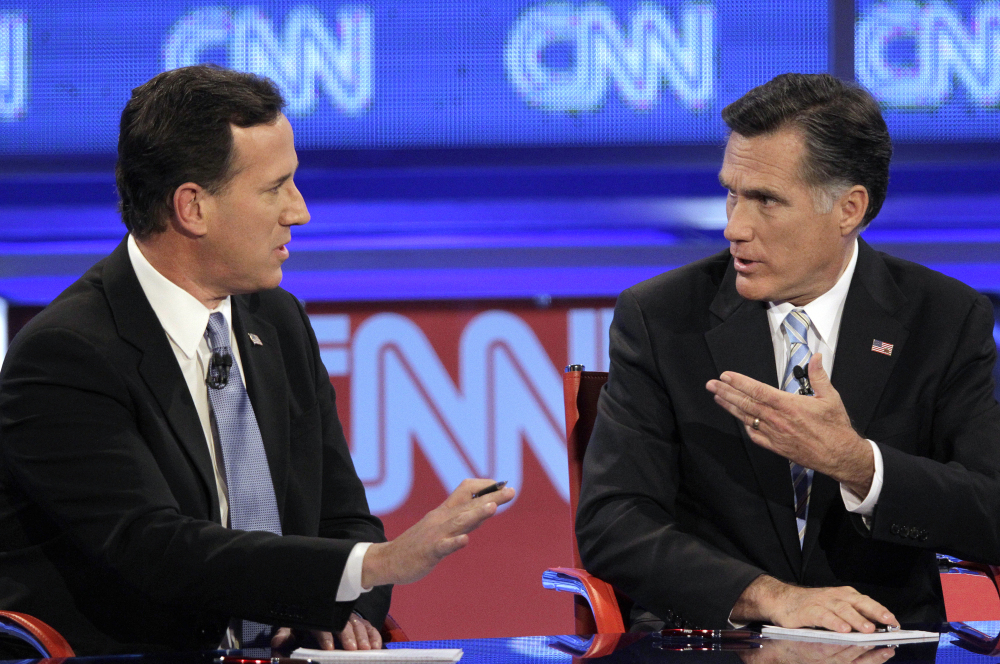 Mitt Romney debates a point with Rick Santorum during a Republican presidential debate on Wednesday.

As expected, Wednesday's Republican presidential debate began with sharp jabs between the candidates. Former Pennsylvania Sen. Rick Santorum, who is coming off a three-state sweep, was the recipient of plenty of attacks.

For the first time, Santorum found himself at center stage, but he was caught in the middle of attacks from former Massachusetts Gov. Mitt Romney and Texas Rep. Ron Paul.

It felt like Santorum was on the defensive all night.

Perhaps one of the most memorable moments of the debate came when Paul called Santorum a "fake."

Paul said he found it curious when candidates first vote for legislation then run for president saying they will repeal it. Santorum voted to pass the Bush-era education reform law No Child Left Behind, said Paul, but now says he would try to repeal it as president.

Romney continually jumped on that thread, tying Santorum to a very unpopular Congress over and over again.

Romney said Santorum embraced earmarks, and Santorum accused Romney of being a hypocrite on the issue because the governor sought earmarks during his time running the Salt Lake Olympics.

Paul helped Romney out again about midway through the debate when he accused Santorum of voting for Planned Parenthood funding.

When Santorum tried to defend himself by saying the funding was part of a broader bill, the crowd booed. And Romney jumped in to say that in a YouTube video, Santorum praised his vote on Title 10 — which funds programs like Planned Parenthood.

Santorum again got boos from the crowd when he said that he made the video to make the point that while he is against contraception morally, he could put that aside and vote for bills that include it.

The debate touched on foreign policy and social issues. It touched on immigration and women in combat. We live blogged it, so read on if you want a play-by-play of the the debate.

Ari Fleischer, who served as press secretary for President Bush, says on CNN that the bottom line is that Santorum came into this debate with all the energy and excitement, but "he didn't take advantage of it."

So how significant will this debate be for the the overall arch of the race. NBC's Chuck Todd tweets:

"BTW, not sure there's any moment tonight that will change trajectory of race which RIGHT NOW has Romney coming back again"

Todd also made the point that Gergen made, tweeting:

The CNN analysts are almost unanimously giving the night to Romney. Partially because Santorum was on the defensive all night with Romney on one side and Paul on the other.

David Gergen perhaps put it best when he said that both Romney and Paul were able to put Santorum on the defensive as a legislator and connect him to a very unpopular Congress. That was especially the case in the first half of the debate.

The candidates answer the last question. Santorum took his time to take some final shots at Romney.

If Americans want to do "a lot with a little," he's the one Republicans should vote for. He says that unlike Romney he ran a campaign based on "issues" and "convictions."

Romney made the point that he has the skills and background to succeed as president. Romney also had a testy exchange with John King, who tried to steer him back to the question of what misconceptions people had about him.

"You ask the questions you want, I give the answers I want," Romney said.

Congressman Paul continues his attack on Santorum. He once again comes back to the fact that Santorum was for No Child Left Behind until he decided to run for president.

He said he understands that Santorum had to "go along to get along."

"But that's the problem with Washington," he said, adding that politicians aren't bound to an oath to a party but to the American people.

Romney defends No Child Left Behind, saying there are things that should be changed, but that the law has the principles right.

"We have to put kids first and the unions behind," Romney said.

Santorum receives another set of boos from the crowd, when he said he "took one for the team" when he voted for the Bush-era education reform law No Child Left Behind.

Santorum says he doesn't understand why President Obama decided to help in Libya but not in Syria. Santorum says the U.S. has nothing to lose in Syria if the Assad regime is toppled.

But the Obama administration is afraid of Iran, he said, who controls Syria.

Gingrich jumped on it and said that with this president, "As long as you're America's enemy, you're safe."

Romney adds that Syria is a great pawn in relations with Iran. It's an opportunity to put pressure on Iran, said Romney.

Paul jumps in and says the United States simply doesn't have the money to fight another war in Syria.

Paul is the only candidate who disagrees on Iran. He says there is no evidence that Iran has nuclear weapons, and he adds that the U.S. has Iran surrounded and they "can't attack anyone."

If you want to go to war, he said, at least do it properly. "Ask the people and ask the Congress," said Paul. At least get a declaration of war.

Romney says Obama's biggest failure has been on Iran. "We must not allow Iran to have a nuclear weapon ... If I'm president that will not happen. If we re-elect Barack Obama that will happen," said Romney.

The candidates are asked what they think about moving women into combat roles. Romney said women are capable of those roles. Santorum, in the past, has expressed concern about women serving in the front lines.

Santorum said he didn't say women serving in the front lines was wrong. "I said I had concerns."

Asked to describe themselves in one word the candidates said:

Gingrich says comprehensive immigration reform is impossible. He says Reagan, Bush and Obama were unable to do it, so the only way to go about it is "step-by-step."

"The first step is to control the border," Gingrich said to applause.

"The right path for America is to drop the lawsuits against Arizona" and others "who are doing the job Barack Obama isn't doing," says Romney about immigration. Romney says states like Arizona are a model of how to deal with immigration.

Santorum is thrown on the ropes first by Paul and then by Romney.

When Santorum tried to defend himself the crowd booed. And Romney jumped in to say that in a YouTube video Santorum praised his vote on Title 10 — which funds programs like Planned Parenthood.

Santorum again got boos for the crowd when he said that he made the video to make the point that while he is against contraception morally, he could put that aside and vote for bills that include it.

Santorum seems to preview how he would handle questions about his comments about birth control and what it is doing for the American family.

"Just because I'm talking about it doesn't mean I want a government to do something about it," Santorum said.

The crowd boos a question that asks the candidates which of them believes in the use of birth control.

Gingrich, now Romney, are skirting the question by criticizing President Obama and his administration's mandate that religious organizations provide contraceptives to their employees.

We're at our first commercial break and so far while the debate has been heated, we haven't gotten to the social issues that have dominated the news in the past few days.

Santorum is asked about why he opposes the bailout of the American auto industry.

Romney responded strongly, saying there is "no way we would allow the auto industry" to disappear.

Santorum says he stands by his defense of earmarks. He said there are some good earmarks, but the system has been abused.

After he finished talking, the crowd was quiet and at least one person booed.

Romney said without uncertainty that he would ban earmarks as president and that led to our first ALERT for the night.

Paul just called Santorum "a fake," saying he finds it curious when candidates first vote for a legislation then run saying they will repeal it. Santorum voted for No Child Left Behind, but now says he would try to repeal it as president.

As expected, the debate has already featured a lively back and forth between Romney and Santorum. Interestingly, the sparring came on government spending.

Santorum tried to tie Romney to the Occupy Wall Street Movement and said Romney said he would raise the debt ceiling. Romney seemed annoyed, saying he was only for raising the debt ceiling if government found a way to pay for it.

The first question goes to Santorum. An audience member asks the candidates what they will do about the country's debt.

Santorum says under his administration defense would not see cuts, but he would cut entitlement programs which Santorum says are the problem.

Santorum defended his record, saying he took on entitlements and never raised taxes.

Paul introduces himself as the "defender of the Constitution."

Santorum says he's here to talk about a "positive solution" to the problems of the country.

Gingrich says that he has come up with an energy plan that will allow every American to look forward to $2.50 gas.

Candidates have one minute to answer and 30 seconds for a rebuttal.

CNN's John King will be moderating the debate tonight. He is also introducing the candidates: Gingrich is first on stage, followed by Romney, Santorum and Paul.

One interesting change on the stage is that the candidates will be seated tonight.

Courtesy of CBS' Political Hotsheet, this is how the candidates will line up tonight. From left to right:

"Paul, Santorum, Romney, Gingrich. Santorum's got to to feel good about that middle spot"

The New York Times points out that this will be the first time Santorum takes center stage.

"According to Arizona voters, Ron Paul is leading Obama in a head-to-head match up: http://ow.ly/9e2F3"