Accessibility links
Fred Who? He's Republican, He's Gay, And He's Competing For Michigan Delegates : It's All Politics As better-known candidates hunt for votes in Michigan's Republican primary, the first openly gay GOP presidential hopeful is plotting a minor upset. Fred Karger is focusing on one congressional district in the hopes of winning a few delegates to the national convention. 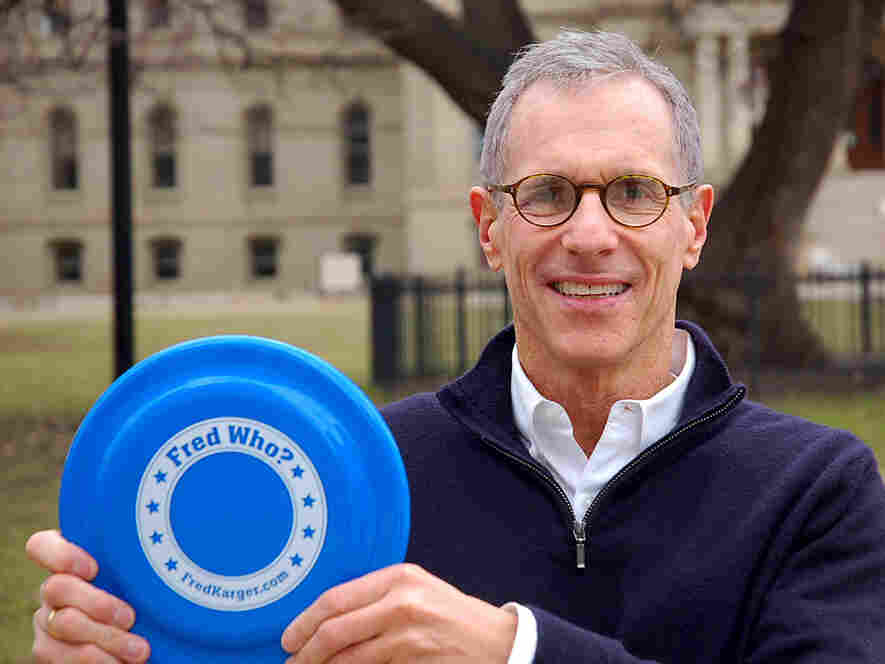 GOP presidential candidate Fred Karger hopes Michigan's primary rules will allow him to pick up a few delegates to the national convention. He's focusing on just one congressional district in the center of the state. Rick Pluta for NPR hide caption 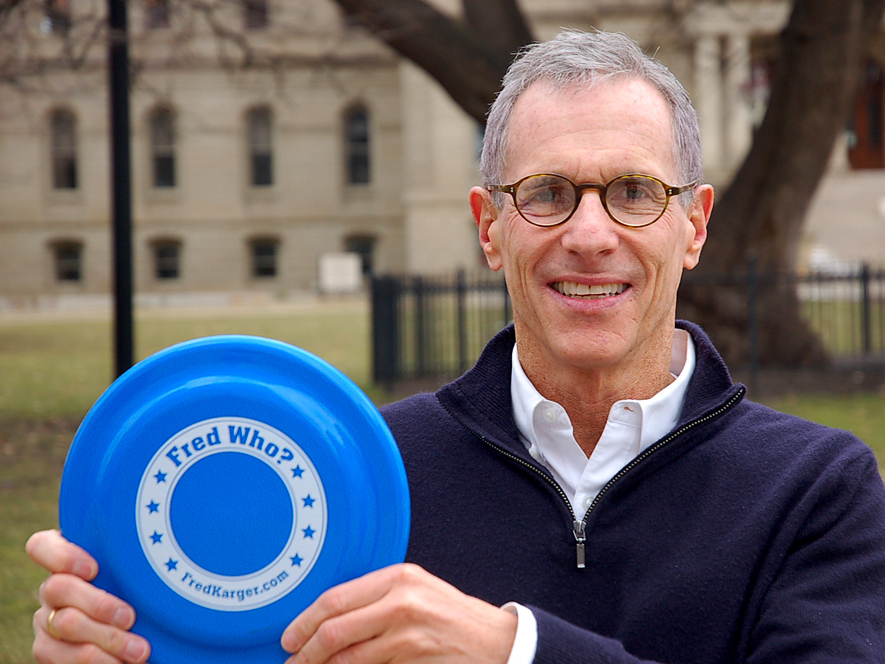 GOP presidential candidate Fred Karger hopes Michigan's primary rules will allow him to pick up a few delegates to the national convention. He's focusing on just one congressional district in the center of the state.

As better-known candidates trod the landscape and crowd the airwaves, pleading for votes in Michigan's Republican primary, the first openly gay GOP presidential hopeful is plotting a minor upset.

Fred Karger hopes the state's primary rules will land him a mid-Michigan miracle and a handful of delegates to the national convention.

The retired California businessman has had a lot of trouble getting to share a stage with the other Republicans running. In fact, his campaign slogan is "Fred Who?"

"You know, had I gotten on an earlier debate, things might be very different," Karger says, "because there is this lack of cohesion around a certain candidate. So I'm hopeful that still as the field narrows that I could get into a debate, and then everything would change."

Karger has filed complaints against Fox News for shutting him out of an early debate in Iowa and against the American Conservative Union for refusing him a spot at its annual convention. 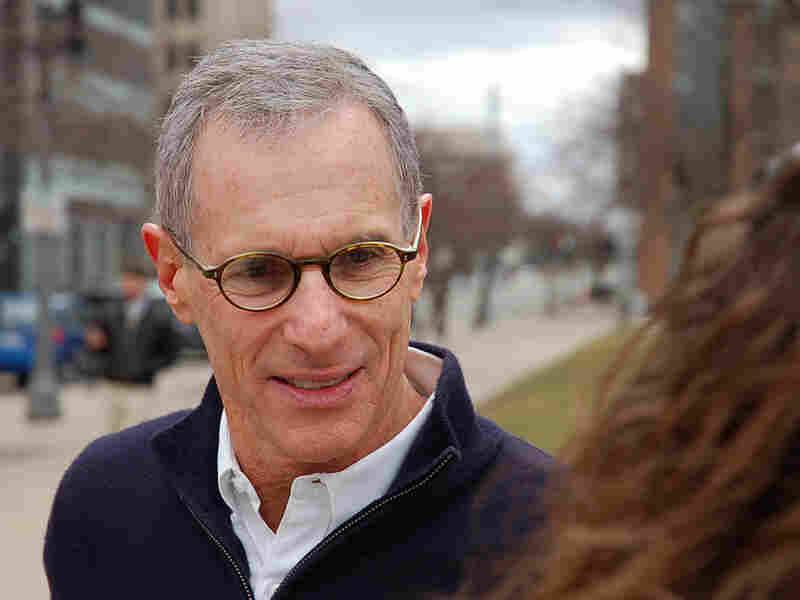 Karger has spent a lot of time at Michigan State University, where he's trying to appeal to supporters of President Obama. Any registered voter can cast a ballot in Michigan's GOP primary. Rick Pluta for NPR hide caption 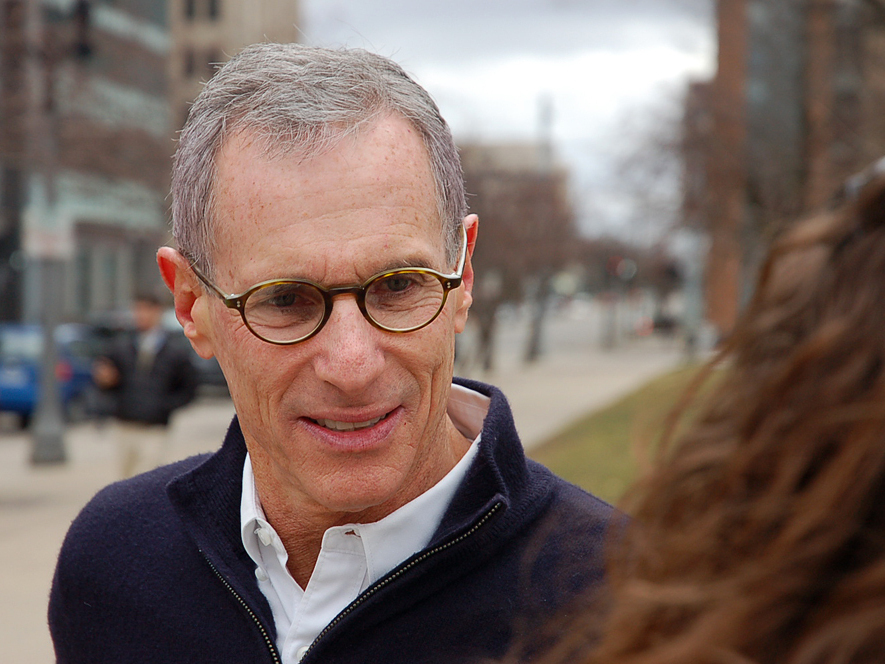 Karger has spent a lot of time at Michigan State University, where he's trying to appeal to supporters of President Obama. Any registered voter can cast a ballot in Michigan's GOP primary.

As a pro-choice, openly gay Republican, Karger acknowledges he's not in the GOP mainstream these days. And he's not really appealing to Republicans to vote in the Republican primary. Any registered voter can cast a ballot in Michigan's GOP contest.

"I am appealing, No. 1, to Obama supporters," Karger says. "A little unethical, a little unprecedented strategy for a Republican. But, as a moderate centrist who actually is to the left of Obama on certain social issues — like full equality, gay marriage, things like that — I am appealing to them. And my message is: Obama is unopposed, literally unopposed — vote for Fred Karger, grab a Republican ballot, make some history."

Karger thinks Michigan's primary rules give him that opening to, as he says, make history. Michigan's primary is actually a bunch of smaller contests. Most of the state's 30 national convention delegates will be determined by winner-take-all congressional district primaries.

"So my focus — and this I don't think has been done — is just in this district," he says.

That's Michigan's 8th Congressional District, in the center of the state — home to Michigan State University, where he's spent a lot of time.

As Karger walks through a food court on the Michigan State campus — shaking hands, passing out campaign souvenirs — Samantha Wilson is intrigued enough to do a quick check of Karger's website on her smartphone before dashing over for a brief conversation.

Wilson is a Democrat, but now that she's met him, she says, a primary vote for Karger is a possibility.

Karger's low-budget campaign does include a TV ad, airing in a relatively affordable market.

"It's done in a very strategic way," he says. "We do ... everything the big campaigns do, but we just do it on a much smaller scale. We've got the lawn signs, the bumper stickers."

Political campaigns used to be Karger's business. His resume includes working on Republican presidential campaigns going back to Gerald Ford's in 1976. He supported Hillary Clinton four years ago, but could not bring himself to vote for Barack Obama in the general election. He cast his ballot for Ralph Nader.

Karger says he knows he's more than a long shot and acknowledges his strategy is unconventional. Other political professionals agree.

"I can't remember the last time I've seen this," says David Doyle, a campaign consultant who once served as the chairman of the Michigan Republican Party. He says Karger is being vastly outspent by the other candidates and their superPACs in the one TV market where his ad is playing.

"And, in this election, the overwhelming majority of voters in the Republican primary are concerned about jobs and the economy, deficit spending and taxes. Social issues are relatively low on the list," Doyle says.

Win or lose here, Karger plans to apply his Michigan strategy to other states that will dole out delegates by congressional district. He's on the ballot in half a dozen states, and he's still trying for more in hopes of picking up some delegates.

He says even just a few would help him get into future debates and maybe get him some attention at the Republican convention in Tampa this summer.