Accessibility links
Casting Himself As Outsider, Santorum Benefited From D.C. 'Revolving Door' : It's All Politics According to his financial statement, in 2010 Rick Santorum brought in six-figure paychecks from a number of different sources, including lobbying groups. 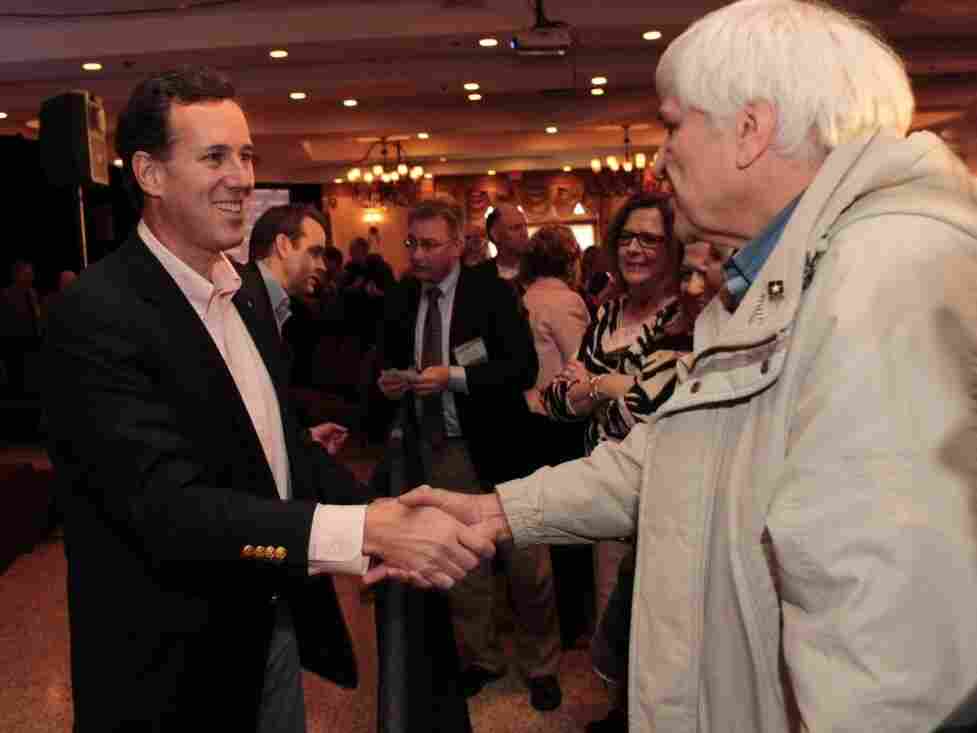 On the campaign trail, Rick Santorum portrays himself as a Washington outsider. But the former senator has made money from inside-the-Beltway pursuits. Jeff Kowalsky/EPA/Landov hide caption 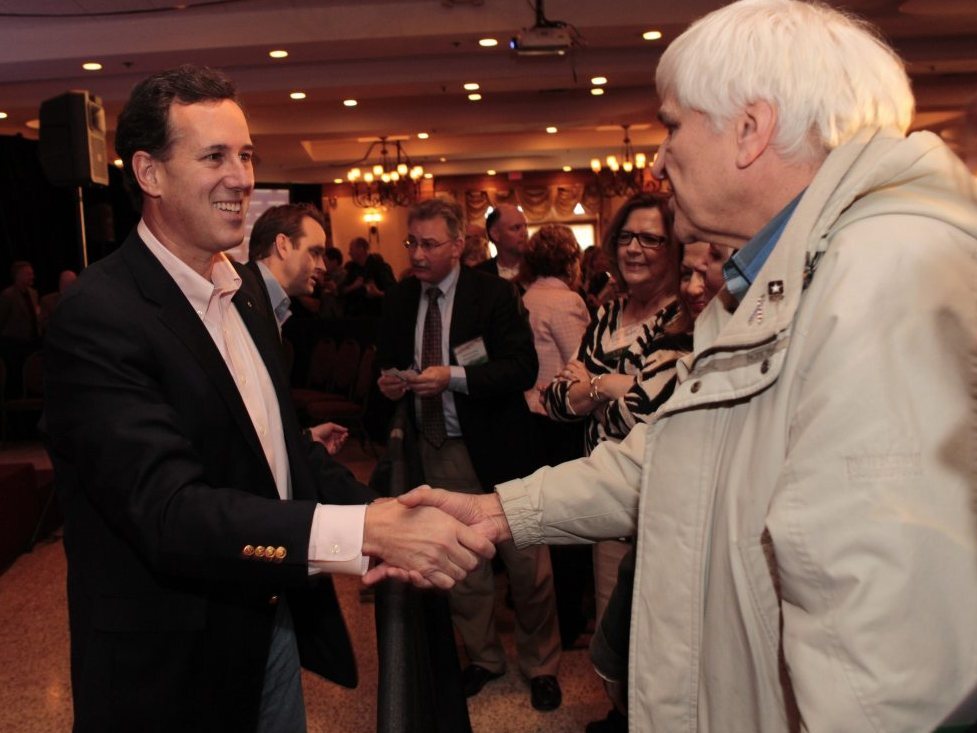 On the campaign trail, Rick Santorum portrays himself as a Washington outsider. But the former senator has made money from inside-the-Beltway pursuits.

Rick Santorum is trying to shake up the Republican primary by winning the primary Tuesday in Michigan — and many polls show him neck and neck with Mitt Romney. He's a former senator from Pennsylvania best known as a culture warrior. What's less well known is what he did after losing his re-election bid in 2006.

After 16 years in Congress, Santorum found himself in need of a new job. And like so many before him, he found work inside the Beltway. Santorum left Congress, but he never left Washington, though that would be hard to tell just listening to him on the campaign trail.

"I come from southwestern Pennsylvania, the heart of the steel country, the heart of manufacturing, and it's been devastated," Santorum said at an ABC debate in January.

On NBC's Meet the Press he spoke about Washington as if he were an outsider.

"I'm coming to change the entire nature of Washington, D.C.," Santorum said. "That's been one of the benefits, frankly, of being out and looking in."

What Santorum fails to mention is among his post-Senate jobs, he worked for a Washington lobbying firm called American Continental Group.

"He clearly was at least what I could call a stealth lobbyist," says Craig Holman, the government affairs lobbyist for Public Citizen, a watchdog group.

To be clear, Santorum wasn't technically a lobbyist. A financial disclosure form he filed last year lists $65,000 in income from American Continental Group for "consultant compensation."

After he left the Senate, Rick Santorum collected paychecks from a number of different firms and media organizations. According to his disclosure report (which you can see at OpenSecrets), here's a look at Santorum's earnings from 2010 through mid-2011:

"What we saw with Rick Santorum is the typical pattern where a member of Congress leaves Congress and immediately joins a lobbying firm and is employed by lobbying entities and lobbying clients," says Holman, describing what is often called the revolving door.

Holman has looked at the pattern and says more than 40 percent of former members actually register as lobbyists. But others, like Santorum and Newt Gingrich and many high profile Democrats too, avoid the unpopular title of lobbyist by consulting or calling themselves consultants instead.

Unregistered former members of Congress are "doing lobbying strategizing, organizing a lobbying campaign, and then perhaps having someone else pick up the telephone and do the actual lobbying contact on his behalf," says Holman.

According to his financial statement, in 2010 Santorum brought in six-figure paychecks from a number of different sources, including the Ethics and Public Policy Center in Washington, Consol Energy, and the Clapham Group. He was also on the board of Universal Health Services. Santorum's campaign didn't respond to requests for information about his consulting work.

"That's a lot of money to pay somebody for advice," says Kathy Kiely with the Sunlight Foundation. "They're providing you their expertise. What is Rick Santorum's expertise? Where does that lie? It lies on Capitol Hill."

Another thing that could challenge the former Pennsylvania senator's outsider status is his address. He and his family live on Creamcup Lane in the affluent Washington, D.C., suburb of Great Falls, Va. They moved there in 2007, less than a year after he lost his re-election bid.

"Most people don't really know what Rick Santorum has been doing since his last position as a U.S. senator," says David Doyle, a Republican political consultant at the Marketing Resource Group in Lansing, Mich.

He says that if more voters knew what Santorum has been up to, it could be a problem for him — depending on how he handles it.

"It's hard to claim that you're an outsider when you live in D.C. or one of the suburbs and all of your work is in Washington, D.C.," says Doyle.

The Romney campaign has picked up on this and is trying to use it against Santorum. Last week in Arizona, Santorum defended himself against these charges, saying he was an outsider even when he was in Congress.

"Going in there, not being one of the crowd, not being part of the establishment," said Santorum referring to his time in Congress. "Shaking things up and making a difference. That's the record I have."

This primary season it seems every candidate is looking to claim outsider credentials, because having Washington experience is seen by many as a burden rather than an asset.