Accessibility links
Santorum Could Lose Michigan Vote But Still Gain Delegates : It's All Politics Michigan's demographics and recent polling suggest there is a real possibility that Rick Santorum and Mitt Romney will each get 15 of the state's 30 delegates. 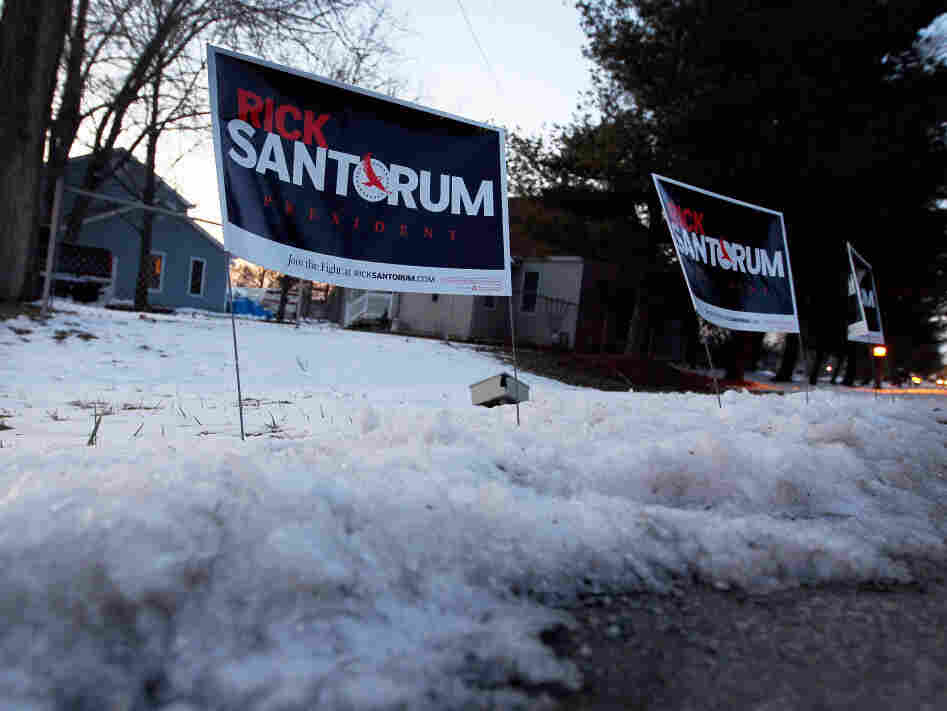 Polls show Rick Santorum and Mitt Romney in a tight race heading into Tuesday's Michigan primary. Santorum's campaign signs are stuck in the snow before his campaign stop at the The Colonial Valley Suites on Feb. 26 in Davison, Mich. Joe Raedle/Getty Images hide caption 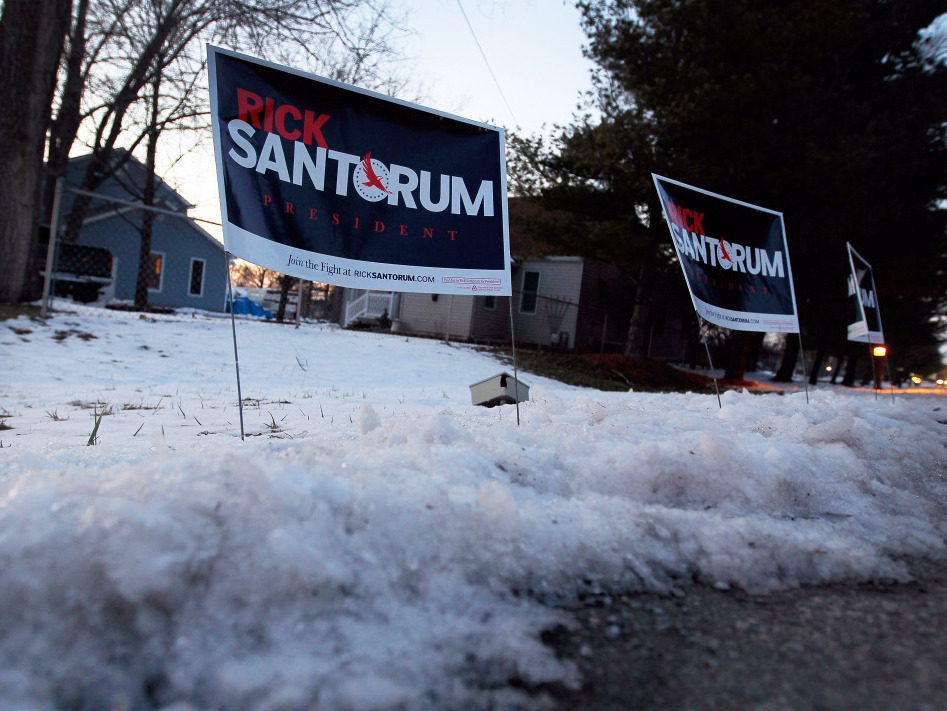 Polls show Rick Santorum and Mitt Romney in a tight race heading into Tuesday's Michigan primary. Santorum's campaign signs are stuck in the snow before his campaign stop at the The Colonial Valley Suites on Feb. 26 in Davison, Mich.

If primaries and caucus victories are still all about media attention and momentum, then, yes, it's critical who wins Michigan's statewide vote Tuesday. All the more so if that winner is not Mitt Romney, who grew up there and whose father was governor in the 1960s.

But as to collecting actual delegates for the actual GOP nomination? Tuesday's vote in Michigan probably will not matter much at all.

Because of an allocation formula that distributes almost all of its delegates by congressional district, neither Romney nor Rick Santorum is likely to gain more than a handful of delegates over the other, regardless of who wins the statewide vote. (There is also the possibility that Santorum could lose the statewide vote but nevertheless get more delegates.)

Each of Michigan's 14 congressional districts (the state currently has 15 but has lost one because of reapportionment following the 2010 census) will award two delegates to the top vote-getter in that district. Romney appears to be running better in the six or seven districts surrounding Detroit, while Santorum is doing better in the more rural areas.

Two additional delegates will be awarded statewide — but unless one candidate wins by an overwhelming margin, those will almost certainly be divided one to Romney, and one to Santorum.

Bottom line: Michigan's demographics and recent polling suggest there is a real possibility that Santorum and Romney will each get 15 of the state's 30 delegates.

Michigan has only 30 delegates despite its large population because it was penalized by the Republican National Committee for violating its calendar rule with its February date. That penalty also applies to Arizona, the other state voting Tuesday, which has been left with 29 delegates.

But because Arizona will award all of its delegates to the statewide winner, it, like Florida last month, has run afoul of a second RNC rule, one that prohibits winner-take-all primaries before April 1. And, like Florida, it faces a challenge at the summer convention — meaning that if the delegate count still matters then, both states' delegates could be reallocated by the Committee on Contests.

In other words, those tracking delegates at this stage would be wise to note that Arizona's 29 delegates and Florida's 50 could well be redistributed proportionally. Romney won Florida and is leading in Arizona but could see that 79-delegate margin shrink dramatically — right at the moment when he could be scratching for every last delegate.

That, certainly, remains an unlikely scenario. The Republican Party has not faced a contested convention since 1976, and the chances of Santorum or Newt Gingrich or Ron Paul quickly building a large enough and rich enough organization to mount a prolonged battle against Romney seem remote.

On the other hand, few GOP insiders anticipated that Romney, heading into March, still would be having trouble closing the deal with GOP primary voters.

Starting with Iowa, each primary or caucus day has brought the promise of clarifying the GOP race. So far, that has not been the case — possibly because so few actual delegates have been awarded. (In the caucus states, that number has been, with the single exception of Nevada, zero.) That could begin to change not Tuesday but a week later, when GOP voters in 10 states cast ballots on this election cycle's Super Tuesday.

In the nine contests so far, a total of 115 delegates have been awarded, with Romney getting 73, Gingrich 29, Paul 8 and Santorum 3. (Jon Huntsman, who has since dropped out of the race, received the other two.)

That total will increase by 59 Tuesday, but then will jump by 413 on March 6, when Alaska, Georgia, Idaho, Massachusetts, North Dakota, Ohio, Oklahoma, Tennessee, Vermont and Virginia all allocate delegates.

That larger number represents a significant fraction of the 1,144 delegates needed to clinch the GOP nomination. But because all the Super Tuesday states also have proportional schemes to distribute their delegates, it remains possible that the long slog will continue well into spring.