Accessibility links
Obama Gives Eventual GOP Nominee Taste Of Michigan Campaign Ahead : It's All Politics If Obama president sounded confident, maybe even a bit triumphant, some polling suggested he had good reason to feel upbeat, at least in Michigan. A recent NBC News/Marist poll found the president leading Romney in the state by 18 percentage points and Santorum by 26 points. 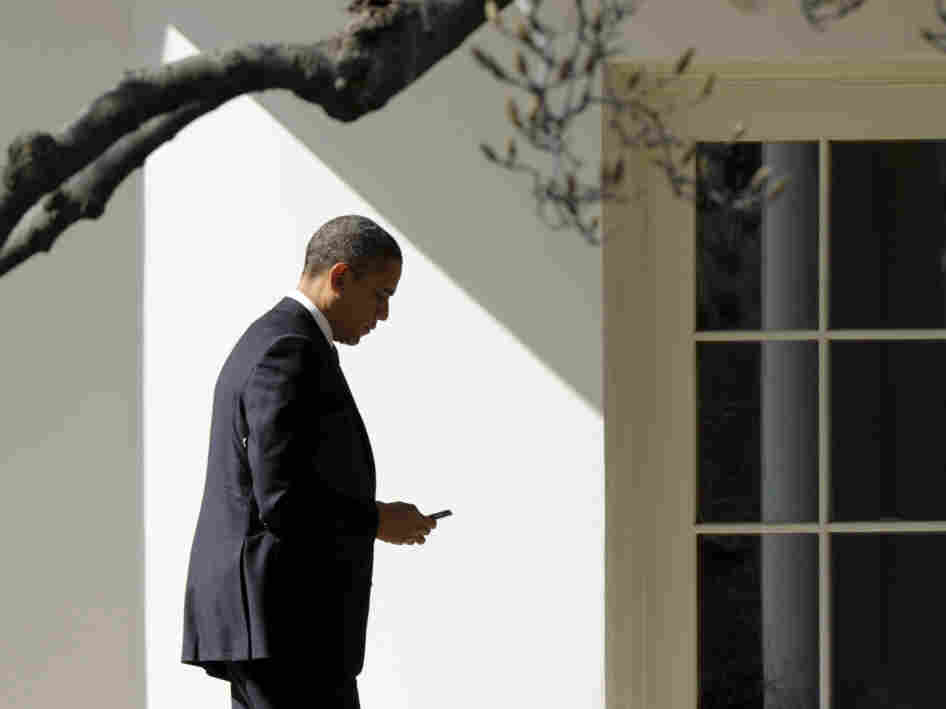 President Obama appears to check smartphone as he heads for the Oval Office after speaking to the UAW, Tuesday, Feb. 28, 2012. Susan Walsh/AP hide caption 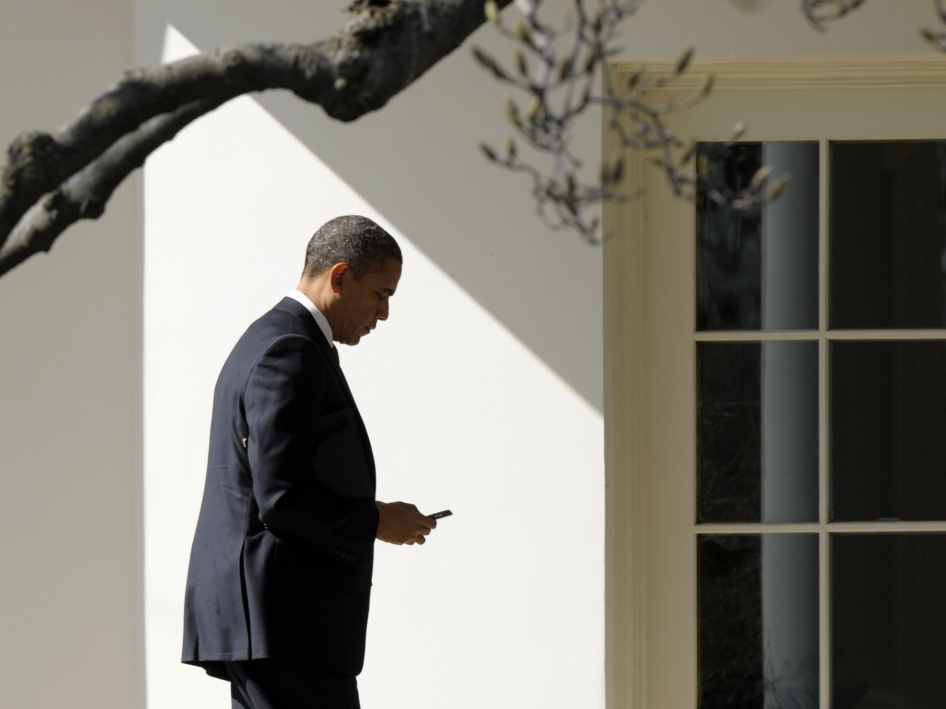 President Obama appears to check smartphone as he heads for the Oval Office after speaking to the UAW, Tuesday, Feb. 28, 2012.

President Obama never mentioned Mitt Romney, Rick Santorum or the other Republican presidential candidates by name in his speech before the United Auto Workers Tuesday.

He didn't need to; everyone knew whom he had in mind when he accused some critics of the federally financed auto industry bailout of peddling distortions.

As they campaigned in Michigan ahead of Tuesday's Republican primary, Romney and Santorum have continued to make their challenging counterfactual argument that the government should never have bailed out GM and Chrysler even if those companies are now enjoying a financial turnaround.

So even as voters were going to the polls in Michigan to vote in the primary, Obama was giving whoever becomes the eventual GOP nominee a taste of the general-election campaign to come.

OBAMA: "... I've got to admit, it's been funny to watch some of these politicians completely rewrite history now that you're back on your feet. These are the folks who said if we went forward with our plan to rescue Detroit, "you can kiss the American automotive industry goodbye."

"Now they're saying they were right all along. Or worse, they're saying that the problem is that you, the workers, made out like bandits in all of this; that saving the American auto industry was just about paying back unions. Really? Even by the standards of this town, that's a load of you-know-what.

"About 700,000 retirees saw a reduction in the health care benefits they had earned. Many of you saw hours reduced, or pay and wages scaled back. You gave up some of your rights as workers. Promises were made to you over the years that you gave up for the sake and survival of this industry, its workers, and their families. You want to talk about values?

"This notion that we should have let the auto industry die; that we should pursue anti-worker policies in hopes unions like yours will unravel – it's part of that same old you're-on-your-own philosophy that says we should just leave everyone to fend for themselves.

"They think the best way to boost the economy is to undo the reforms we put in place to prevent another crisis, and let Wall Street write its own rules again.

"They think the best way to help families afford health care is to undo the reform we passed that's already lowering costs for millions of Americans, and go back to the days when insurance companies could deny your coverage or jack up your rates whenever and however they pleased.

"They think we should keep cutting taxes for the wealthiest Americans so that billionaires can keep paying lower tax rates than their secretaries.

"I don't think so. That's the philosophy that got us into this mess. And we can't afford to go back. Not now..."

If the president sounded confident, maybe even a bit triumphant, some polling suggested he had reason to feel upbeat, at least in Michigan. A recent NBC News/Marist poll found the president leading Romney in the state by 18 percentage points and Santorum by 26 points.

Those results suggested that while the opposition of the GOP candidates to the auto bailout was a winner with Republican base voters, it played decidedly less well with the state's Democrats and independent voters.