Accessibility links
Romney Continues Hitting Santorum For Robocalls To Mich. Democrats : It's All Politics Romney's campaign was out with a new web video meant to remind Republicans in Ohio, Tennessee, Georgia with primary elections in less than a week that Santorum sough votes from Michigan Democrats. For Romney, it was a chance to gain the upper hand as each man in the struggle to persuade Republican voters that he is the truer conservative and his rival is merely a pretender. 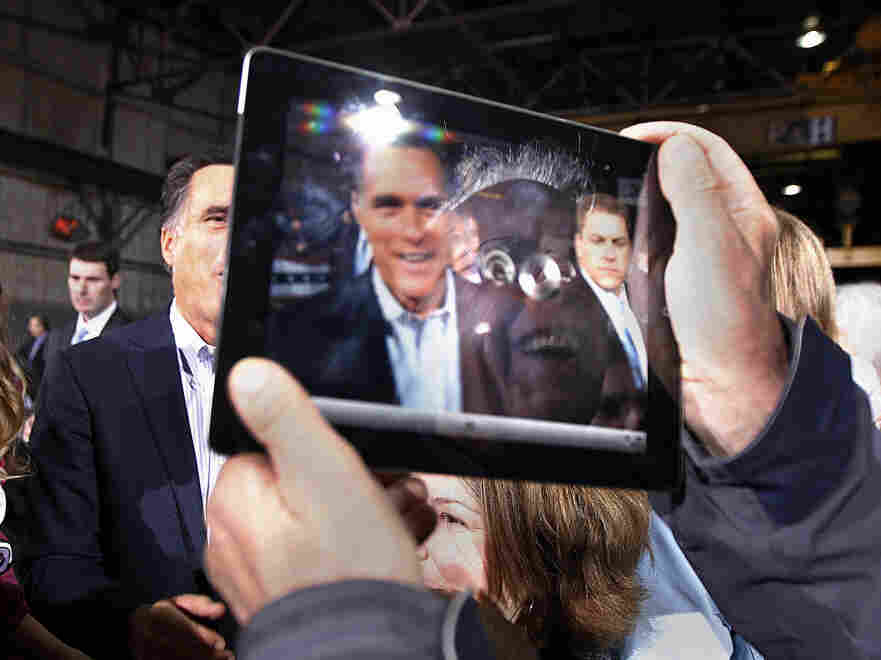 Mitt Romney was captured on the iPad screen held by a man at a campaign event in Toledo, Ohio, on Wednesday. Gerald Herbert/AP hide caption 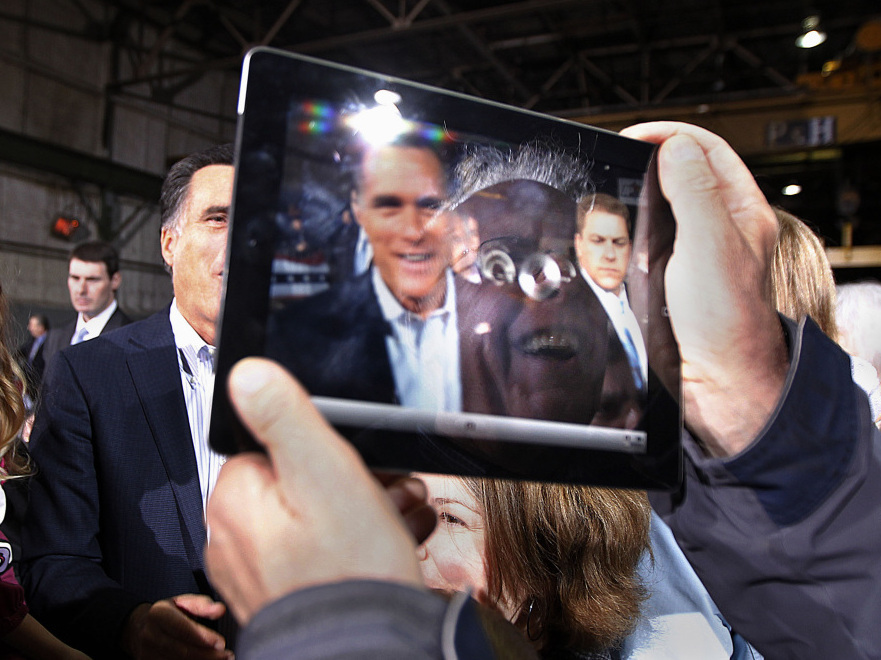 Mitt Romney was captured on the iPad screen held by a man at a campaign event in Toledo, Ohio, on Wednesday.

Mitt Romney's campaign isn't about to stop citing Rick Santorum's robocalls to Michigan Democrats, as the former Massachusetts governor continues to try to stoke a backlash against his chief rival for the Republican presidential nomination.

As the contest moves toward Super Tuesday next week, Romney's campaign was out with a new Web video meant to remind Republicans in Ohio, Tennessee, Georgia and other states holding votes a week from now that Santorum invited Michigan Democrats to vote for him instead of Romney.

For Romney, it was a chance to try to gain the upper hand in the struggle to persuade Republican voters that he is the truer conservative and his rival is merely a pretender.

The video features CNN news footage of Democrats explaining that they were voting for Santorum in Michigan's open primary to skew the Republican primary's results and lengthen the GOP's intraparty fight with an eye toward improving President Obama's re-election chances.

Asked about the new Romney video during a teleconference with journalists, John Brabender, a Santorum strategist, denied that the former U.S. senator from Pennsylvania was trying to create mischief. (Romney had accused Santorum of trying to "kidnap" the Michigan Republican primary.)

What Santorum was actually trying to do was attract Reagan Democrats, Brabender said.

"Part of our strategy, and I think it's probably a failure of their strategy, was to understand that in some of these congressional districts, there were going to be a lot of conservative Democrats that vote regularly in Republican primaries, who were going to show up. We certainly have said from Day 1, the senator said this at one of the debates, one of the reasons we are best suited to beat Barack Obama, was our appeal to Reagan Democrats and to get them to cross over.

"And I think, frankly, the hypocrisy here is, this is the same Mitt Romney, as you all know, who crossed over and voted in the presidential primary of 1992 to vote for the Democrat instead of choosing to vote for the Republican ..."

The reason the Santorum campaign held the call was to talk about the all-important delegate chase; specifically, to say that Romney may have won the popular vote in the Michigan primary but that Santorum's people were getting anecdotal information they might be tied with Romney for delegates in the state. Brabender pointed to a report in the Lansing State Journal. An excerpt from that report:

"Mitt Romney and Rick Santorum apparently each won seven of Michigan's 14 congressional districts — where most of the delegates to the national convention are allotted based on the state Republican Party's rules — in Tuesday's GOP presidential primary.

"Though results are not yet final, Santorum appeared to make it even in the battle for congressional districts by taking the last district to report its numbers — the 13th in Detroit and some western Wayne suburbs."