Accessibility links
Despite Mixed Polls, Gingrich Claims Lead In Southern States : It's All Politics Newt Gingrich will campaign throughout Alabama on Saturday. Ron Paul and Rick Santorum will spend the day in Missouri and Kansas. Mitt Romney has no public events scheduled. 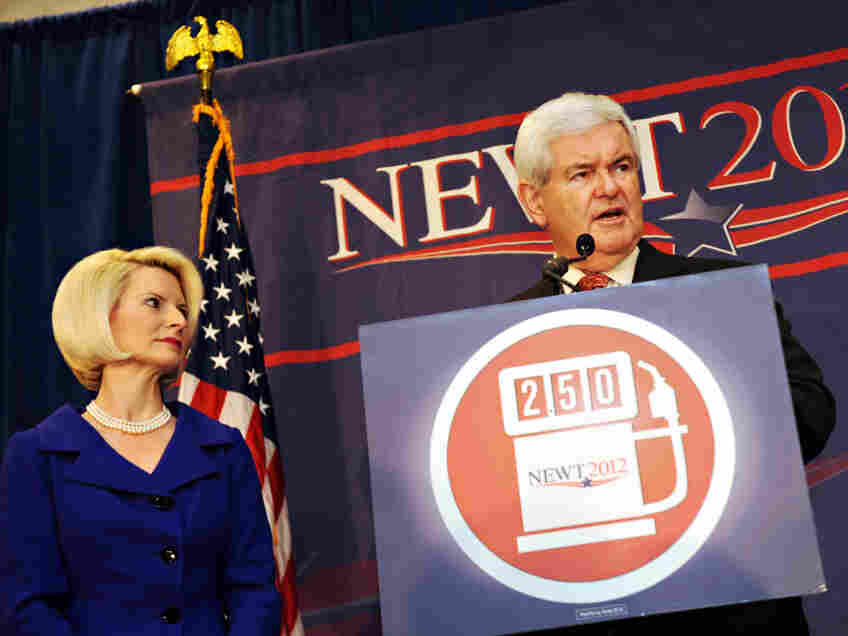 Former Speaker of the House Newt Gingrich speaks at a rally with his wife, Callista, on Thursday in Jackson, Miss. Marianne Todd/Getty Images hide caption 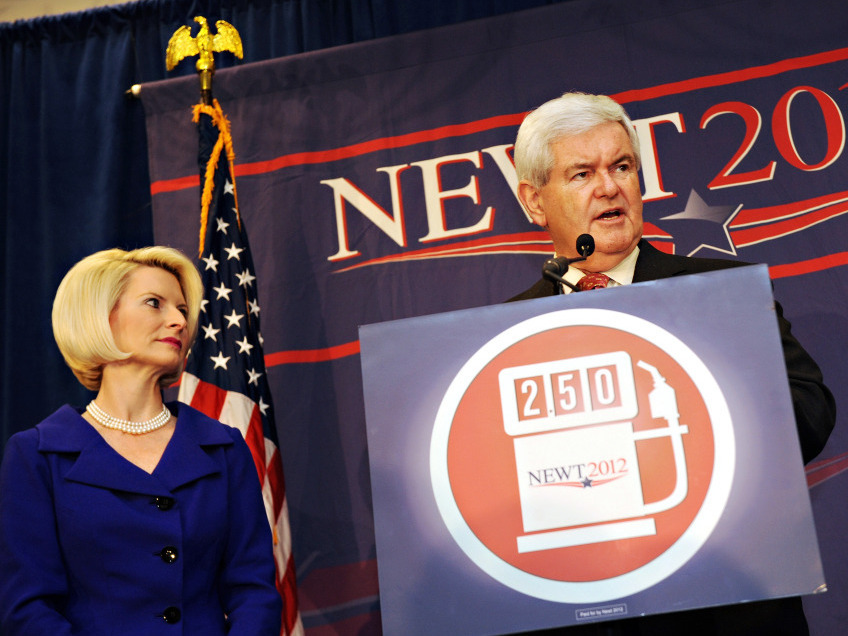 Former Speaker of the House Newt Gingrich speaks at a rally with his wife, Callista, on Thursday in Jackson, Miss.

Mitt Romney may consider the pair of primaries in Alabama and Mississippi on Tuesday an "away game," but Newt Gingrich is claiming a home court advantage.

Friday morning in an interview with WTOK-TV in Meridian, Miss., Gingrich said, "As a fellow Southerner, I understand Mississippi concerns, Mississippi values. And I think from a Georgia perspective I'm a lot closer to the average Mississippian than a Pennsylvania big union candidate or a Massachusetts moderate." He was presumably referring to former Pennsylvania Sen. Rick Santorum and Romney, the former governor of Massachusetts.

Gingrich will campaign throughout Alabama on Saturday. Ron Paul and Santorum will spend the day in Missouri and Kansas; Romney has no public events scheduled. On Sunday, Santorum has one event in Mississippi. No other candidate has announced any events that day.

While the candidates are all over the map, so are the polls in Mississippi and Alabama.

Friday morning, Gingrich's campaign highlighted a Rasmussen poll of likely Alabama Republican primary voters that shows the former House speaker in first place. But with a 4 point margin of error, it's a statistical dead heat among Gingrich (30 percent), Santorum (29 percent) and Romney (28 percent). Other recent polls in Alabama show Romney or Santorum leading.

The Gingrich campaign is also pointing to an American Research Group poll giving its candidate a 4 point lead in Mississippi. However, Rasmussen's latest Mississippi poll shows Romney with an 8 point lead in the Magnolia State, with Gingrich and Santorum tied for second.

In that local TV interview Friday morning, Gingrich characterized the national race for the GOP presidential nomination by saying, "We're now into a cycle where nobody knows what's going to happen."

In Alabama and Mississippi, at least, that certainly holds true.