Accessibility links
Heading Into Tuesday's Vote, GOP Candidates Seek Southern Comfort : It's All Politics Rick Santorum and Newt Gingrich have been working hard across the country to pry votes away from Mitt Romney. In the Deep South, it may be easier for the candidates to do just that. Over the weekend, both Santorum and Gingrich campaigned before enthusiastic crowds in Alabama and Mississippi. 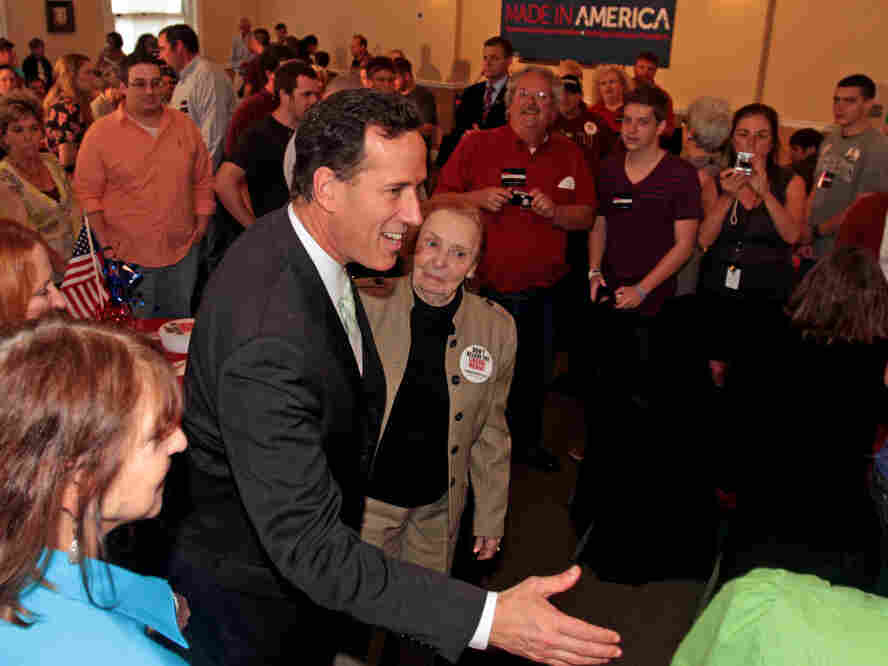 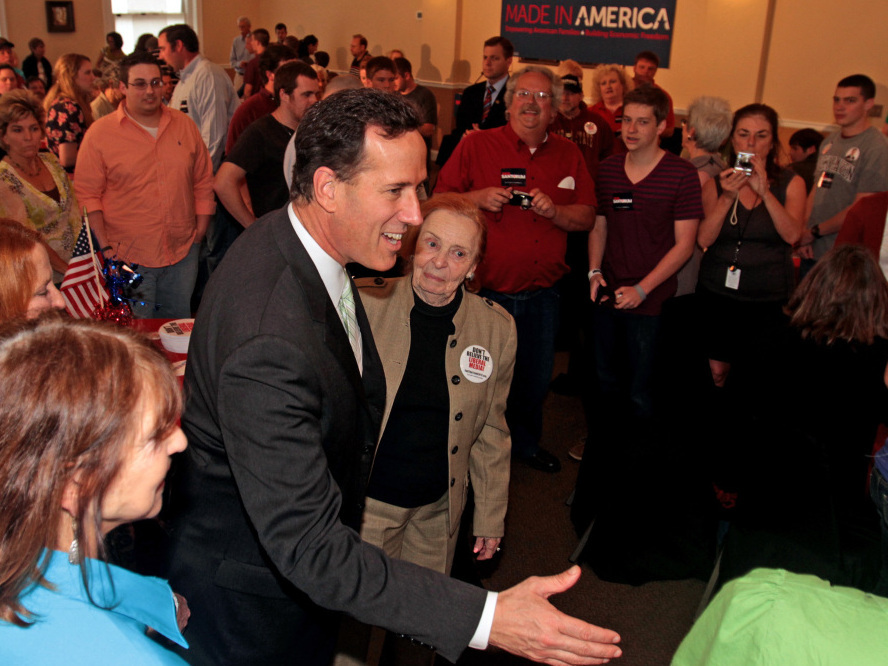 Rick Santorum greets supporters during a rally at Lookout Steakhouse in Gulfport, Miss., on Sunday.

With three wins on Super Tuesday, and a victory in the Kansas caucuses over the weekend, GOP hopeful Rick Santorum is on a high — and campaigning hard in the South.

"This is going to be a very close race here in Mississippi, and I know the same thing is true in Alabama. We've got lots of folks down here working hard," Santorum told a crowd at Weidmann's historic restaurant in Meridian, Miss., on Sunday.

The former Pennsylvania senator said he is the conservative candidate who can reduce government and provide the best contrast to President Obama. And Santorum urged voters to do their part in pushing his GOP rival Newt Gingrich out of the race.

"If we're able to do well here and in Alabama, then I think this race without question becomes a two-person race. I think it's already there, but some people don't recognize that yet," Santorum said, as the crowd laughed.

On NBC's Meet The Press on Sunday, Santorum refused to admit that former Massachusetts Gov. Mitt Romney has an edge in winning the GOP nomination.

"This race has a tremendous amount of dynamics," he said. "And we've got a lot of states coming up that are going to be great states for us."

Santorum says that includes Pennsylvania and Texas. But this week, it's still a battle for the South.

On Sunday night, Newt Gingrich took center stage in Brandon, Miss., outside Jackson with a stump speech very similar to Santorum's, saying he's the one with the experience to change Washington.

"And while I like and admire my friend Sen. Santorum, the fact is while I was speaker, we passed the Balanced Budget Act of 1997 and we got four consecutive balanced budgets," Gingrich said.

He said Santorum voted to raise the debt ceiling five times. And he again tried to put to rest any rumors that he might get out of the GOP race.

"I am in this race all the way to Tampa for a practical reason," Gingrich said.

That reason, he says, is that the non-establishment, non-Wall Street wing of the Republican Party deserves a candidate.

"I believe in Proverbs. Without vision, the people perish. And I believe we need a visionary, not a manager," he said.

As for Romney, many voters, like real estate developer Gary Harkins, say people here just don't trust him. And they didn't like Romney's attempt last week to act like he was one of them.

"I think that Gov. Romney will stop saying 'y'all' by Wednesday, and he probably won't ever eat grits again," Harkins said.

Harkins says he likes both Santorum and Gingrich, but plans to vote for the former speaker.

"I think he's got more experience and more knowledge, and I think he'll do a better job," Harkins said.

Robbie and Heather LaCoste say they could vote for either Gingrich or Santorum — but in the end, it's Santorum.

"You know he's got a big family," Robbie said. "We got a big family — we got four kids. We like what he stands for — his morals and his faith, his values and everything."

"The family is the strength behind our country," Heather added. "If you have strong families, then you have a strong country. I believe he has stronger values."

It's clear Santorum wants to do well here. But for Gingrich, Alabama and Mississippi are crucial.

"These states provide a direct challenge for both of these candidates who appeal to the same types of voter. Now who is going to be stronger?" asks Merle Black, a political science professor at Emory University and an expert in Southern politics.

"You can make an argument that Gingrich from the Deep South would have an advantage in these other Deep South states. On the other hand, in terms of viability as a potential Republican nominee, Santorum looks stronger than Gingrich," Black said.

Alabama and Mississippi could make or break Gingrich's Southern strategy.

And there's another scenario that could play out. If evangelical and conservative GOP voters split their support between Santorum and Gingrich, Romney could be the big winner. Heading into Tuesday's vote, polls show a tight race in both states.