Accessibility links
Analysis: Why It's Time For Newt Gingrich To Say Good Night : It's All Politics Rick Santorum, who won the Alabama and Mississippi primaries on Tuesday, has proven himself the conservatives' favored alternative to front-runner Mitt Romney.

Analysis: Why It's Time For Newt Gingrich To Say Good Night

Analysis: Why It's Time For Newt Gingrich To Say Good Night 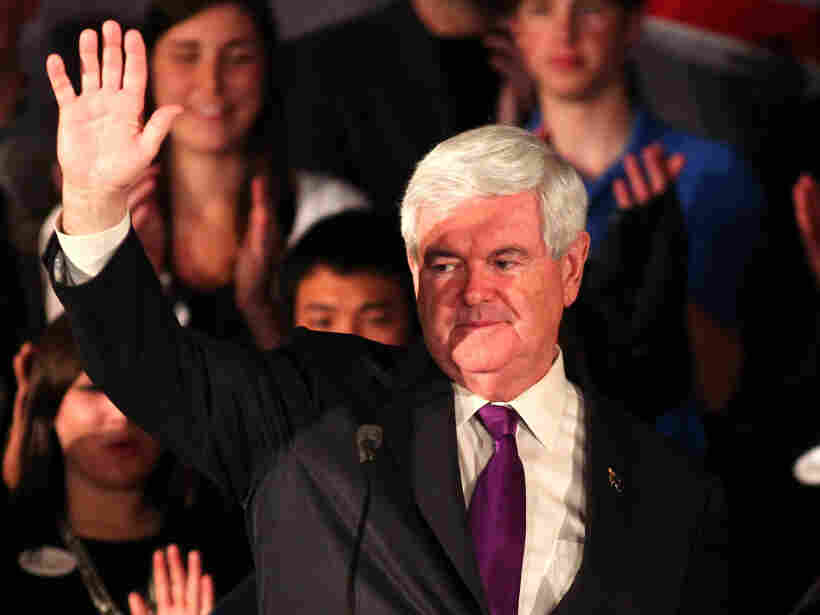 After his losses in Alabama and Mississippi on Tuesday, Newt Gingrich will face increasing pressure to drop out of the GOP race. Here he waves to supporters after speaking at a rally in Hoover, Ala., on Tuesday. Marvin Gentry /Reuters /Landov hide caption 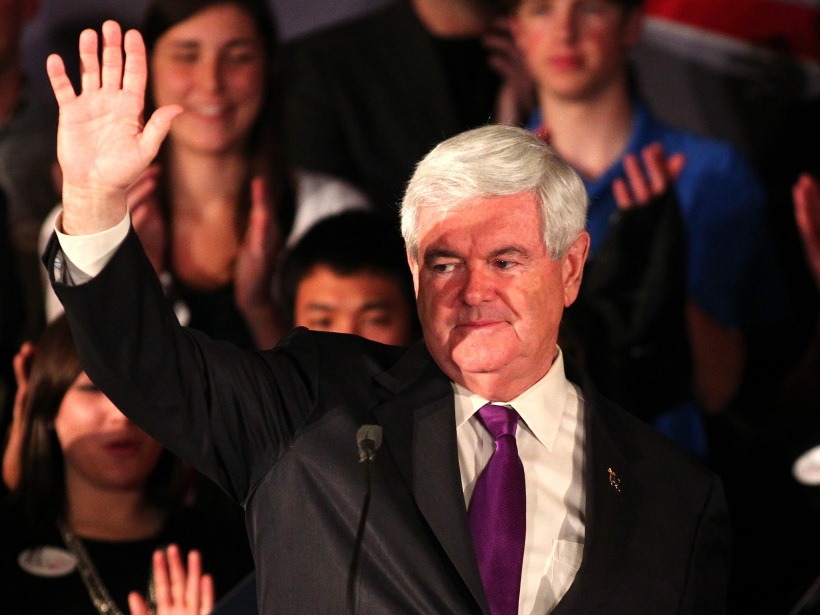 After his losses in Alabama and Mississippi on Tuesday, Newt Gingrich will face increasing pressure to drop out of the GOP race. Here he waves to supporters after speaking at a rally in Hoover, Ala., on Tuesday.

It is time for the much-winnowed field of Republican presidential contenders to shrink a little further. It is time for Newt Gingrich to bid adieu and wrap up his bid for the nomination.

If Gingrich had won these two states, he would be calling on Santorum to end his campaign and permit Gingrich to mount the kind of mano a mano challenge to Romney the party's rank-and-file clearly crave. Gingrich would be doing so all the more vociferously if he had won as many votes in other states as Santorum has to date. And if he had, he would have a good case.

But instead, Santorum has emerged as the white knight of the white evangelical voters. Though a Yankee and a Catholic, Santorum has swept many a Southern Protestant off his or her feet in recent weeks by connecting the economic troubles of the time to the social changes the culture has undergone in recent decades. This is a message that finds an audience, not just in rural Mississippi and Alabama but in the suburbs and exurbs of Middle America.

Santorum has the fire, he has the family, and he has the faith that says a hard-shell conservative can beat that man who somehow wound up in the White House four years ago.

Indeed, Santorum is now the only candidate other than Romney who can get to the 1,144 delegates needed for a nomination on the basis of generally recognized math. Gingrich has long been an advocate for thinking "outside the box," but lately he has moved outside the box where one finds the calculator, the abacus and the times table. His notion of a late surge now must assume that a deadlocked convention turns to him in a moment of frenzied passion. As a fallback strategy, it is a long shot to the point of irrationality.

Nonetheless, for the moment at least, the Gingrich inner circle continues to embrace defiance. There is much talk of the national debate, and the debate within the GOP, and the ultimate debate — the one with President Obama. This amounts to a final throwing down of the single trump card Gingrich has had from the beginning: his gift for spontaneous and incendiary rhetoric.

It was this talent that spawned the popular notion that Gingrich could and would humiliate the incumbent president one-on-one on stage come the fall. This notion, based in large measure on two debate performances in January, fueled the Gingrich surge in South Carolina — his only victory outside his home state of Georgia. Ask his team where they expect to win next and they mention Wisconsin, the home of Newt's third wife, Callista. This is a lovely notion, except that the last poll of Mrs. Gingrich's home state showed her hubby running a weak third there with 10 percent of the vote.

Gingrich needs to cash in now, not because he is running a weak third in Wisconsin but because he has not filled the inside straight he had to fill in his home region in order to be a legitimate contender at a contested convention in August.

After a stunning win in South Carolina, Gingrich cast himself as the candidate of the Deep South. But to win that laurel, one must win the states that were won by the region's heroes in the historic regional tests of the postwar era. These states form an arc from South Carolina westward to Georgia, Alabama, Mississippi and Louisiana.

These states represent the nation's anchor to windward, the portion of America most deeply resistant to change — not just for the past 50 or 100 years but all the way back to the Civil War. If you want to be the hero for the traditionalist strain in the national electorate, you must prove your bona fides in these states.

Strom Thurmond did it back in 1948, winning four of the five (Georgia went with the incumbent Democrat, Harry Truman) as the nominee of the splinter faction Dixiecrats. Barry Goldwater collected all five in 1964 after voting against the Civil Rights Act that same year (he won only one other state, his home state of Arizona). Then there was George Wallace, whose third-party candidacy in 1968 carried all five of the Dixie stalwarts (and no other states anywhere).

The Deep South is no doubt an important piece of the Electoral College. For a century or more, the winner in these five states has usually been the winner nationally. In our own time, the most popular candidate in these states tends to be the leader of the conservative movement in the country as a whole, and that is always a formidable title and place of power.

As of now, this place and power belong to Rick Santorum. And that, too, is a reason his last remaining conservative rivals should bow out now. If they do not, they risk further dividing a party already riven and weakened by internal division.